Panic in Washington: Hitler's dream in the making

Outgoing US President Barack Obama has recently visited Berlin to pick a new leader of the liberal West. In fact, Obama is bringing together an anti-American bloc in Europe. It is a curiosity or panic? Can Angela Merkel become such a leader, and whom will she rely on? Is she concerned that Donald Trump may have her as the first course for a geopolitical dinner? 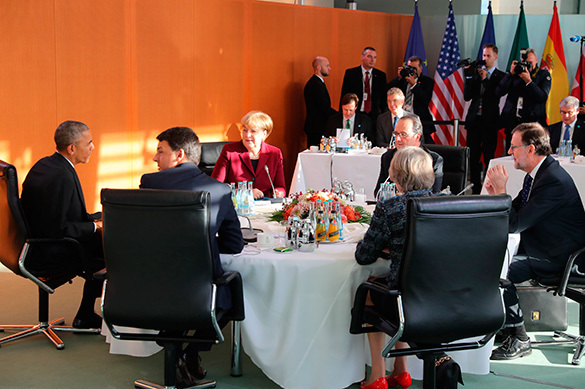 On Friday, Obama had meetings with five European heavyweights to find himself a replacement as the leader of the Western world. Obama is convinced that Trump will not be able to become one.

The re-election of François Hollande seems virtually impossible. British Prime Minister Theresa May can not be elected for ideological reasons - the UK is leaving the EU betraying the European solidarity. Italian Prime Minister Matteo Renzi stirred up a referendum on constitutional reforms (infringement of the rights of the Senate), and the referendum is doomed to failure. Spanish leader Mariano Rajoy chairs a minority government; Spain still remains in a deep debt crisis. Canadian Premier Justin Trudeau was absent from the meeting in Berlin, and so was Japanese Prime Minister Shinzo Abe. The latter has had a conversation with Trump that left him satisfied. Trudeau is busy with establishing a dialogue with Russian diplomats.

Thus, Obama has no one to choose from, and we can see Angela Merkel becoming a hostage to the dying Atlantic brotherhood. The New York Times called her "the last defender of the liberal West." Merkel is supposed to take Western values through the storm of nationalism, xenophobia and racism inherent to Donald Trump, the newspaper wrote.

Let us ask ourselves: is it panic in Washington, is it not? Or is it a curious incident? The country that lost WWII is becoming the leader of the West. Hitler's dream in the making. Merkel said on Sunday that she would run for a fourth mandate and support the Transatlantic Trade and Investment Partnership (TTIP) - a project supported by Obama.

What are Merkel's advantages in the opinion of Western journalists? After eleven years in office, Angela Merkel has built the strongest economy in Europe. She has coped with the Greek crisis, she controls the EU and remains committed to liberal values ​​- tolerance and all sorts of liberties. The leader of the free world today is Angela Merkel, historian Timothy Garton Ash told The Guardian.

Can Angela Merkel become the German Chancellor for the fourth time?

Will she be able to get the job again? To accomplish that, the CDU/CSU will need to win the federal elections to the Bundestag in the autumn of 2017 and obtain the right to form the government. Austrian newspaper the Contra Magazin wrote that 30 percent of support is the maximum what the party alliance has. Currently, the CDU/CSU has 40 percent of Bundestag seats. Merkel's popularity in Germany is extremely low due to the refugee crisis. According to August polls, more than a half of German citizens are opposed to the fourth term of Merkel as Chancellor. The Germans are tired of 12 years of "Mutti's" reign.

Afterwards, Merkel is supposed to become a coalition candidate. Her coalition partner - the Bavarian Christians - harshly criticize her for ignoring the interests of Bavaria in the refugee crisis. Merkel has failed to nominate her presidential candidate and promoted the candidacy of Social Democrat Frank-Walter Steinmeier at the CDU/CSU congress on behalf of the "broad coalition" with the SPD.

Merkel's normal behavior in abnormal times may result in the appearance of unexpected figures in the political scene, such as, for example, nationalists, whom the Western liberal world fears greatly. This party has the approval rating of only 14 percent, but this figure may double due to the transition of the electorate from the SPD.

Finally, there is the Trump factor, who builds interstate relations on personal likes and dislikes. Trump will remind Merkel of her agreements with Obama and do everything not to let her win the  Bundestag elections. The Americans have this leverage. When Schroeder did not follow the Americans in Iraq, he quickly came across the opposition of the elites, and gave way to Merkel. One should bear in mind the fact that all of Germany's gold reserve is located in the USA, and there is a US army base in Germany.

"If you read German and European media, then, indeed, one gets the impression that Mrs. Merkel is becoming a priestess of liberal religion, whom Obama has blessed to maintain common Western values," Alexander Rahr, director of the German-Russian Forum, German international journalist told Pravda.Ru. "But if you imagine the people who will be sitting at table during the G7 summit in eight months, there will be new faces there, save for Merkel and the Japanese leader. Angela Merkel will indeed continue preaching the idea of ​​common liberal values. Let's wait and see how she can handle it," the expert told Pravda.Ru.