Theresa May began her job as the new Prime Minister of the United Kingdom on Wednesday. In 24 hours, she gave clear indications that there are fundamental precepts which Westminster does not understand. The new Brexit Government looks like a mix between Faulty Towers and Wacky Races. 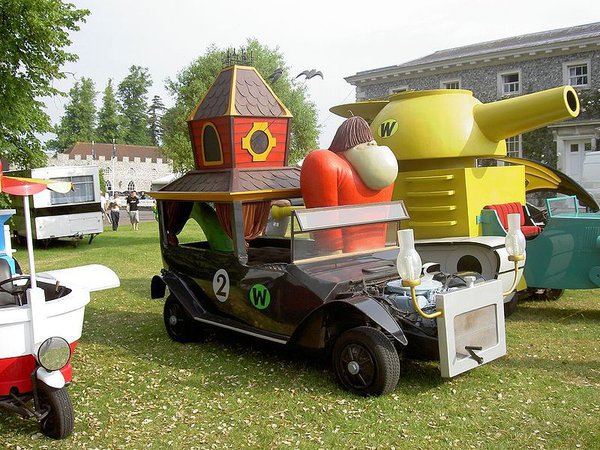 ...and they're off. Penelope Pitstop in the Compact Pussycat is calling the shots from Number 10, installing the Gruesome Twosome in key Brexit positions, Peter Perfect in Number 11 and Rufus Ruffcut in the Foreign Office. Sergeant Blast and Private Meekly look on to see when they will be invited to the party and in the background we can hear Muttley snickering and swearing at Dick Dastardly who dashed Rufus Ruffcut's hopes of winning the race.

The spectacle provided by the British, however, is no laughing matter. And now for something serious. It is by now crystal clear that those in Westminster simply do not understand certain basic indicators which are perceptible to the grass roots in the UK, glaringly evident for those of us who look on from outside but invisible to those in the halls of power, even those like Theresa May who positions herself with the People, as a One-Nation Tory.

As I wrote the other day, in my piece Meet Theresa May, I believe in giving people a blank sheet of paper to write on every time they take or change office, because while a person might not have the qualities or the luck to fulfil a satisfactory period of office in one department, (s)he can do better (or worse) in another, at another time, given different circumstances.

However, in twenty-four hours, Theresa May has already given indications that she is veering dangerously off course. The first is her statement Brexit is Brexit. For those living outside the UK, it was shocking to see a gullible uninformed and largely ignorant public being duped and misled by people such as Boris Johnson, the new Foreign and Commonwealth Secretary, Michael Gove and others, who now openly admit that what they were saying is not exactly the case. It is not the case at all, and 17 million people fell for it?

I do not know a single person outside the UK, from Brazil where I have residence, to Angola which I visit regularly, to Moscow where I am based, who did not quote the case of Norway, which is outside the European Union and which pays around 350 million GBP per week to belong to the club - something the UK will now be doing, but without its foot inside the door. As Prime Minister Cameron said during his campaign, which Theresa May supported, Britain will now be outside the party, looking in, spending the same amount of money that it did before but this time without a say in what happens.

How many of those who voted for Brexit understood this, how many voted LEAVE because they were lied to, how many would reverse their decision if given a second vote? Secondly, there was not a "clear" mandate as Theresa May states, that the British people wish to leave the European Union. I repeat, if the referendum was repeated tomorrow, the result would be 60% to 40% to remain. I would add that simple majorities of this kind should never be acceptable in this sort of referendum, because in an extreme case all it takes is one single person to cast a vote wrongly, when drunk, and (s)he shapes the future of tens of millions of people for years to come. The Conservative Party should have attached a qualified majority stipulation of two-thirds either way. Finally, the referendum is not legally binding and it is unclear whether existing legislation in fact recognizes the legality of Brexit unless certain unfulfilled conditions are met. More on this in articles to come. So there is not a clear mandate at all. Slightly more people voted to leave, under false promises.

Next, the appointment of Boris Johnson as Foreign and Commonwealth Secretary comes as a shock to everyone, since the appointment brings with it a very great risk that tomfoolery and boyish brashness will accompany the new Secretary into his plush Whitehall offices. Perhaps it is make-or-break time for one who commits more gaffes than most, time to grow up or get out, the beginning of a serious career in international politics or the end of the road; perhaps Theresa May sees in Boris Johnson, who she knows better than the rest of us, something more than a court jester, perhaps she has seen some hidden promise of a statesman ready to appear, instead of a political version of an uncle who puts on a noisy rendition of flatulence after his fifth glass of port at a family gathering, horrifying his wife's side of the family and seeing his side spending the afternoon curled up giggling on the sofa. That is exactly how the rest of the world is viewing Britain today.

One would urge Boris Johnson not to pay any attention to the motley collection of po-faced liars which staff the Foreign and Commonwealth Office, living examples of Machiavellian skullduggery who have destroyed whole societies and countries with their evil mechanisms in recent years, telling barefaced lies and supporting terrorists on their own lists of proscribed groups, Libya's LIFG being the feather in the cap of William Hague for example.

As for the appointment of Philip Hammond as Chancellor of the Exchequer, which is the British title for Minister of Finance and the Economy, the mind boggles as to how someone who proved so utterly incompetent as head of his country's diplomacy as Foreign Secretary could do a better job as head of the country's finances, although perhaps his own background with his past myriad of business interests can set him in good stead.

He showed a total lack of grasp regarding the events in Syria and the Ukraine and was one more of the western heads of diplomacy to display shitfaced arrogance and insolence, insulting Russia and its policies and making juvenile statements such as so-and-so has to go. All very well at a Sunday afternoon cricket game outside the club house, but what right does a British politician have to choose what happens in sovereign states overseas?

Above all let us hope that Theresa May has the courage to move away from war and bombing as means of crisis management, embraces the new world order based upon the resolution of conflict using the UN Security Council and a multilateral approach which adopts an egalitarian stance in the international community, not a holier-than-thou, top-down approach which has got Britain hated around the world in its succession of foreign policy disasters.

Will Westminster ever grasp that? For now, Britain's political situation looks like a mix between Faulty Towers and Wacky Races.