The Spanish revolution without Brussels

Spanish Prime Minister Mariano Rajoy puts on a brave face when he says that the People's Party has reestablished its high rating. In fact, he has no one to form a coalition with. The right to form the government may go to his opponents, and Podemos Party is likely to get hold of the portfolio of the Minister for Foreign Affairs. This heralds criticism of the policies of Brussels. 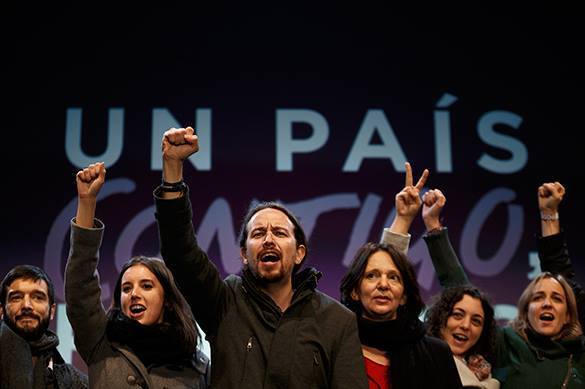 Spain held parliamentary elections on December 20. The ruling People's Party (PP) won the elections, having scored 123 mandates and lost 60 seats, as well as the absolute majority in the 350-seat parliament.

The Spanish Socialist Workers' Party (PSOE) won 90 seats and lost 20 mandates, but managed to avoid the humiliating third place, mainly due to a landslide victory in Andalusia.

The third position is taken by Podemos Party ("We can") with 69 mandates - this is the main sensation of the elections. Notably, the party won the elections in Catalonia and the Basque Country - the two separatist regions of Spain. Podemos came second in Madrid, Valencia, Galicia, Navarre and the Balearic Islands.

The list of parliamentary parties ends with the right-wing party called Citizens (40 mandates).

Prime Minister Mariano Rajoy's victory at the parliamentary elections in Spain exists only on paper, many experts say. Socialist leader Pedro Sanchez said that the way to the grand coalition with the PSOE is a way of many obstacles that Rajoy needs to overcome to win 176 seats.

The coalition with Citizens does not provide for such a majority. Plan B is the ability to create a left-wing coalition of PSOE and Podemos.

Podemos was founded in 2014 by left-wing activists from the movement of "indignados". Its opposition to austerity measures and corruption won the movement extensive support among the population. Pablo Iglesias won playing on the slogans of the weakness of PSOE. Will he be able to create an alliance with Socialists, whom he calls a "privileged caste?"

If this happens, then Podemos will receive the portfolio of the Minister for Foreign Affairs, as the second party of the coalition. Podemos is a leftist organization. The party believes that Catalonia, just like the Crimea, has the right to self-determination, Ukrainian journalist Sergei Leshchenko wrote. "Two weeks ago I met with one of Podemos leaders and was struck by how perversely they take the situation in Ukraine. Podemos is convinced that it is right-wing radicals and nationalists that seized power in Ukraine as a result of the coup," the journalist wrote.

Spanish pro-government media write about the special role of King Philip VI, who can become a mediator for negotiations between all political forces.

Constitutional monarchy in Spain is obsolete

"The institute of constitutional monarchy in Spain has outlived itself, - Alexander Chichin, an expert for economic and social affairs told Pravda.Ru. - The institute is not flexible, it prevents the state from being manageable. All Spanish newspapers write that it was chaos that has won these elections.

New strong parties - Citizens and Podemos - are indeed people's parties. Their members are doctors, engineers and teachers, the expert continued. These people want a democratic style of doing business in the country.

"I think that Citizens will ask for a referendum to find out what the Spaniards think of the Spanish monarchy. As for the relations with Russia, the issue is not important for the Spaniards," said Alexander Chichin.

"The most surprising thing in these elections was the fact that Catalan parties agreed to take part in them, - Ekaterina Cherkasova, a senior fellow at Institute of World Economy and International Relations told Pravda.Ru. - We know that Catalonia wants to pull out from Spain. There are pro-nationalist forces in power in Catalonia, and they said that Catalonia had nothing to do with these elections because this is an internal affair of another state."

"Eventually, under the pressure of public opinion and the decision of the Constitutional Court, they decided to participate in the vote and received a very good result. Together they have 17 deputies. The position of these 17 deputies could be decisive, and these people will go for a coalition with Iglesias rather than with Rajoy."

According to Ekaterina Cherkasova, Brussels is unhappy with the success of Podemos. This is a party of eurosceptics, who believe that the interests of Brussels and the interests of Spain, mostly Spanish workers, do not coincide.

"Brussels is guilty of the high unemployment rate in Spain, especially among young people, and Brussels does not help reduce this unemployment," she added.