2016: The year, when US empire starts falling apart

At the end of 2016, we traditionally turn back at the outgoing year to understand its significance. The Year 2016 had two major trends: the failure of the policy to isolate Russia from the rest of the world and the global onset of nationalists, in the good sense of the word - those who defend the nation from degeneration and loss of national identity. In this context, even the death of Fidel Castro appears as "the Moor has done his duty, let him go." 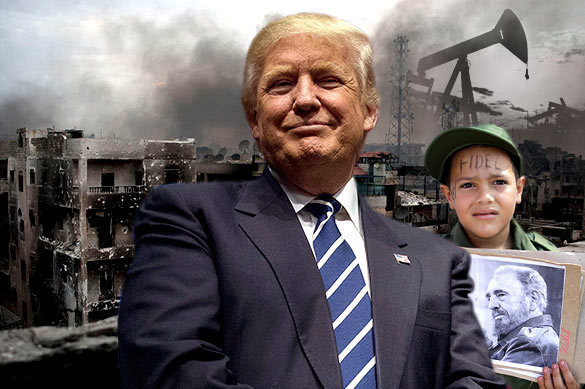 1. The first place belongs to the victory of Donald Trump in the US presidential election. This has become the biggest surprise of 2016. The republican has bulldozed all of his rivals: the majority of the oligarchic elite, the media elite, the entire power political elite and even the elite of his own party. Donald Trump understands what the American people want - namely, the long-awaited change of US policies that have led the nation to degeneration and loss of identity.

Globalism has suffered a crushing defeat in the United States, because Trump has promised to stop "fighting against dictators" and deal with the industrial and economic development of the USA. He has convinced people that the traditional Russophobic policy is a road to nowhere. Judging from first appointments that he has made, it appears that Trump does think so indeed.

2. Russia took advantage of the weakness of the Obama administration and changed the course of the Syrian campaign with the help of the Syrian army. Syria has obtained a chance to remain a single state, while Russia has retrieved its influence in the Middle East. "The defeat that terrorists suffered in Aleppo was the defeat of those countries that were supervising them - the US, France and the UK. Aleppo became the last card that they could play on the Syrian battlefield," Syrian President Bashar Assad said in an interview with RT. Russia's success in Syria also became possible owing to the defeat of the globalists in Turkey.

3. The failed military coup in Turkey. The news about the attempted coup in Turkey shocked the whole world. Indeed, the Americans rarely miss in the implementation of "color revolutions." Yet,  Erdogan survived and made a situational choice in favor of Russia. His subsequent reconciliation with Putin made it possible to find a compromise in Syria. Most likely, Russia and Turkey agreed on the following: Ankara withdraws militants from the Aleppo and Idlib provinces, while Russia pledges not to cooperate with the Syrian Kurds.

In general, Erdogan is interested in the united Syria. Rebuilding relations with Turkey has resulted in the ratification of the agreement on the construction of the "Turkish Stream" gas pipeline project. This is an important event for Russia in connection with the announced abandonment of the use of the Ukrainian gas transit system by 2020.

4. Russia's success in Syria has promoted the implementation of the OPEC deal with Russia. In April, Washington could stop the Saudis, but with Trump's victory, no one dared to do it again, as the deal was beneficial to America's "oil industry" that sponsors the Republicans.

Persian monarchies agreed with Russia to freeze oil production, after it became clear that soon they would have to negotiate on other issues, such as the construction of gas pipelines to Europe. Putin has played the role of mediator between the governments of Saudi Arabia and Iran. Russia's ability to reach the agreement, despite contradictions inside the OPEC has demonstrated Russia's growing influence in the Middle East.

5. Contrary to sanctions with the participation of large foreign investors and Swiss banks, Russia's largest state-owned assets - the company Rosneft - was privatized. The deal could be called political, as it clearly strengthened Russia's international positions.

The Rosneft deal has shown that business has started showing less reaction to pressure from Western politicians. The deal angered German Chancellor Angela Merkel most, who frequently  speaks against Russia, accusing the Russian Federation of various crimes, including cyber attacks.

6. The saga of cyber attacks comes sixth. Washington claimed that Russian hackers broke into the servers of the Democratic Party and exposed unsightly information about Hillary Clinton, having thus affecting the outcome of the presidential election in the United States in Donald Trump's favor.

US secret services had a fight with each other because of that story, but they have never found any "Russian traces." According to WikiLeaks, the information was exposed by someone in the top administration of the Democratic Party. Barack Obama personally threatened Putin, but his words were nothing but big nothing.

7. The Olympic Games in Rio and the use of Cold War methods to isolate Russia come seventh. The anti-Russian campaign in sports still continues: Russia has been stripped of the world bobsleigh and skeleton championship, which was supposed to take place in Sochi.

Richard McLaren's reports were based on the testimony from one person only - Grigory Rodchenkov. The second part of his report did not provide any other evidence to prove the existence of the state support of doping in Russia.

8. The results of the Brexit vote heralded the beginning of the process of the collapse of the globalist pyramid. Brexit shaped up euroscepticism as a real force. The victory of François Fillon in France at the Republican primaries (a supporter of a sovereign state), does not look a sensation, just like the defeat of globalist Matteo Renzi at a referendum in Italy.

9. The conclusion of the peace agreement between the Government of Colombia and the guerrillas of the "Revolutionary Armed Forces of Colombia - Army of the People" (FARC-EP) takes the ninth position on our list of major events in 2016. This conflict was the longest in the history of the Western hemisphere: the confrontation lasted for more than 52 years.

Interestingly, the referendum did not approve the treaty, and one had to take it through the parliament. This testifies to the lack of understanding between elites and the people: parliament does not always express the interests of the people.

Fidel Castro acted as the mediator in the negotiations. President Miguel Santos said that it was Castro, who made the agreement possible.

10. The death of Cuba's Fidel Castro concludes our list. The world admired Fidel for his devotion to his ideas even in most desperate situations. Fidel Castro was the last revolutionary on the planet, in the most elevated sense of the word. He was a representative of the people, who stood up alone against American imperialism, having received full support from the majority of the Cubans.

The American empire is falling apart, and it all started in 2016. "The Moor has done his duty, let him go."