The coup in Turkey

That reality is moving fast these days is a fact before the eyes of all: the terrorist massacre in Nice, operated by a coward without honor that has wiped out more than eighty people with a truck launched at full speed, has become now a second news, supplanted by the attempted and soon failed coup in Turkey. 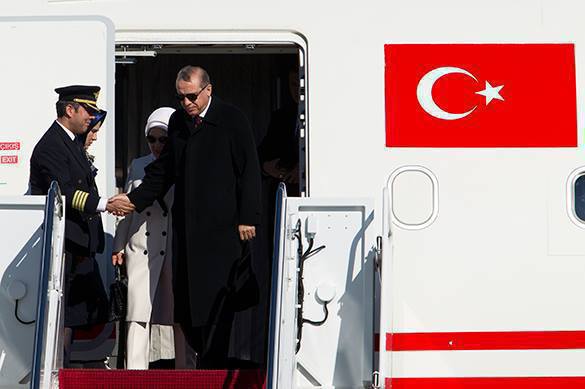 Recep Tayyip Erdogan is still in place, to our disappointment. For our further bad luck, he consolidated his power unleashed against his opponents a purge that is still going on: when he has finished, the survivors will be too weak and too few to act yet. They will stay holed up to lick their wounds, waiting for better times and hoping to survive in the meantime.

Among those who follow the Turkish and Syrian affairs, there is US Senator Richard Black who explained his point of view in a statement released shortly after the start of the coup:

...Under Erdogan, Turkey has been the principle ally of ISIS.  A fleet of 2,000 oil tankers funneled stolen Syrian oil across the border into Turkey, funding much of the ISIS payroll.  When Russia intervened in Syria, it bombed the ISIS tanker fleet, destroying 1,500 of the tankers.  In response, President Erdogan ordered Turkish jets to down a Russian jet, causing a diplomatic furor after Turkish-supported rebels killed the parachuting pilot as he was descending.

Erdogan has been one of the world's greatest supporters of terrorism.  He, along with the Saudi Arabians, created the "Army of Conquest" which was centered around al Qaeda, the organization that staged the 9/11 attacks on the Twin Towers and Pentagon.

Turkey, which became a NATO member during the Cold War, emerged as a major sponsor of terrorism.  As President Erdogan consolidated his powers, he jailed Turkish generals, prosecutors, judges, and journalists.  Several months ago, he seized control of Turkey's major newspaper and turned it into a propaganda organ under his control.

If successful, the military coup in Turkey would be good news for the cause of world peace.  Since 1925, Turkey operated under a modern constitution that kept Turkey secular and suppressed radical Islam.  Its conversion to an Islamic state under Erdogan resulted in a sea of bloodshed across Turkey's borders in Syria and Iraq.

We can only pray that the Turkish military is successful in ousting President Erdogan, who has said that he wants to acquire powers similar to those of Adolph Hitler.

Unfortunately the prayers have not been sufficient and Erdogan continues in his office of President of Turkey.

With hindsight it is easy to be strategists, write opinions and make judgments observing things safe from your own living room, a thousand miles away from the places where the events happen and yet some things are objective.

The conspirators were too few and did not enjoy the support of the rest of the armed forces, much less than that of the population.

Even the journalists of the state TV have reacted against the military coup: this is to say how much the insurgents were few and too few convinced of their role. Both the military and the people, at least in Istanbul, sided openly with Erdogan sign that the he has been able to create a network of consensus that is based not only on favoritism and corruption but also on a deep feeling that most likely has its roots in the imperial past of Turkey. It has spent barely a century since the ouster of the last Turkish sultan and the memory of a strong and international authoritative imperial Turkey definitely lasts through collective feeling of the population. So little matter that in some areas of the country Erdogan is unpopular and detested. Turks like Erdogan.

Those who organized the coup...

Those who organized the coup? Not Putin's Russia. It was something organized in Washington with the intention to get rid of one that is now seen as a broken promise: the Obama administration has been very cautious in commenting on the start of the coup and sensationally warm in commenting on his failure. Broken promise but also a pawn gone mad (from the American point of view) which pursues not only the neocon plan for global dominance but also a his own personal plan of neo-Ottoman restoration. Erdogan wants to enter History. Removed the immediate danger he has also allowed himself to lay siege to Incirlik and arrest a Turkish general who collaborated in the coup. Incirlik, American NATO airbase as the 60 nukes hosted. Erdogan is not a joker and doesn't send words.

Complaining of cruelty reserved to the putschists who have surrendered means not remember who you're dealing with: Erdogan is son of Turkey, steeped in her legal and social authoritarian culture, he is not only a former street thug moved to politics as well reminds us Thierry Meyssan. On the other hand, Hugo Chavez Frias showed humanity and decency in dealing with the coup leaders who wanted to kill him and not for this was best considered by Washington, to have them spared after foiled US plans. This is not to demean the greatness of commander Chavez who was a giant compared to Erdogan but I want to introduce another idea.

Why did the coup fail? I fear that in Washington there is for years an black hole of intelligence and common sense and, from my point of view, even of the minimum necessary of humanity that it is equally necessary when dealing with the rest of the world. Foreign policy is botched up in schematics too simple and based on elementary principles of cause / effect, flatters / intimidation and a total lack of foresight: why wonder when you always acted with arrogance? But in this case the United States have not only failed but they left to deal as a bully put in a corner. The hegemonic power has been taken aback by a chum that always had to be on the second floor and that instead he also pulled a couple of slaps.

Is now Erdogan a target? Yes. But he's a target that is able to react and is in position to deal. It seems that he is already doing it with the Russians. In politics there are always strange bedfellows: he could reach an agreement with the Syrians and Kurds or push for a resurgence of the war against Syria. The consequences of this failed coup will be seen well in the coming months.

After learning of the failure of the coup I reached again senator Black and I asked him a hot comment: what future now for Turkey and her president?

The answer is clear and direct, as in Richard Black's style:

After WWI, the founder of the Republic of Turkey, Mustafa Ataturk, enacted modern reforms that provided excellent press freedom and some religious freedom too.  The military was the protector of these constitutional freedoms.

Throughout his career, Erdogan has worked closely with the Muslim Brotherhood to dismantle freedom in Turkey.  First as Prime Minister, then as President, he jailed the generals, the prosecutors, the judges and the journalists.  Several months ago, he closed the Turkey's top newspaper and reopened it under his control.  Erdogan emerged as a tyrant in full control of the country.

In coming months, expect a dramatic shift toward an extreme Islamic state.  Erdogan will demand and receive powers similar to those of Adolph Hitler.  He gave Hitler's Third Reich as an example of the type of government he envisioned for Turkey.  When his prime minister, Ahmet Davutoglu, resisted the move toward dictatorship, he sacked him.  After surviving the coup attempt, he will now achieve his goal.  For Erdogan, the coup will be like the Reichstag fire was for Hitler.

Erdogan has gradually empowered Islamic extremists.  Now, he will accelerate the cultural change to radical Islam and increase reliance on primitive Sharia Law.  Freedom will be extinguished.

I predict a return of the Ottoman Empire, which has long been a dream of Erdogan's.  With full military dominance, he can become the Caliph of the new empire.  Turkey will emerge as a threat to both Western and Eastern Europe.  It was no accident that the so-called "Syrian refugees" sent into Europe by Turkey, turned out to be mostly young, military-aged Muslims, filled with hatred and ripe for jihad against Western Civilization.

The military coup was a major threat to ISIS and to al Nusra (al Qaeda in Syria).  Had the coup succeeded, it would have been a major setback for global terror, since Erdogan was, at least until recently, a major backer and trading partner of ISIS.  He will continue Turkey's policy of serving as a base for terrorism against Iraq and Syria, and his Islamist world view will continue Turkey's role as a hotbed for global terrorism.

Something tells me that the senator is right. Unfortunately.

Author`s name Costantino Ceoldo
14:50
Number of foreign mercenaries in Ukraine continues growing
14:17
Russians buy more than 50 tons of gold in 2022
13:57
Russia will not talk to Ukraine. Russia will talk to the West
13:34
USA's plan to give 20 percent of Ukraine for peace hoax
12:51
Medvedev: Ukraine as a state to be devastated, go bankrupt and be turned into colony
18:34
Biden changing strategy on Ukraine to reach diplomatic solution with Russia
13:35
USA's next step is to suppress European economies
12:28
Moscow wants to push Ukrainian troops away from Russian territories
19:55
US eco activist arrested for walking calf on Red Square
19:06
Putin speaks about the shelling of Russian regions
Ukrainian forces suffer heavy losses while trying to cut across Dnieper