Russia pays for US peace in Syria

Agreements of Lavrov and Kerry in Geneva on joint acts in Syria have not been fulfilled. The US administration is the officials that resign, agreements with them are not valid. The 'secret' one in particular. So why do the Russian authorities try to seek a compromise with those who cannot and don't want to seek it? 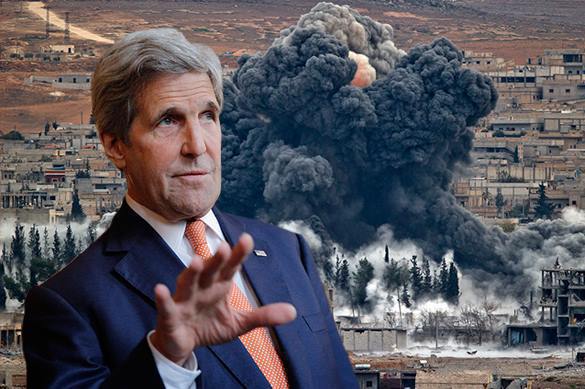 Why has Washington gone the length of agreement with Moscow?

Obama's task is to maintain Jihadi forces in Syria for further strike against Bashar al-Assad. Operational state of affairs has not favoured them lately. The government forces blocked the US allies, so-called 'moderate fighters', in the eastern part of Aleppo - a key strategic site of the combat acts in Syria.

The road of life named Castello has been blocked for a month so far. Maintenance supply of these groups should have been restored immediately. Thus the plan was invented with the aim to allegedly deliver humanitarian aid to people.

In fact to deliver help Aleppo and the suburbs can be accessed not only via the Castello road. People know the paths and penetrate to the north-western part of the city, where life goes on: plants operate, there are no bombardments. If there is any danger, people leave, as it happened with the 1070 quarter which is now deserted. So, talks about numerous hostages and hunger in the eastern Aleppo are much ado about nothing. And it's impossible to properly equip fighters with the help of 'stalkers', a road and trucks are needed to transport weapons and munition.

Why has Russia gone the length of agreements?

The Russian authorities most probably needed a diplomatic breakthrough, Washington though didn't recognize Moscow as an ally before Geneva. Well, they agreed to create a Joint Coordination Centre to strike terrorists in concert. And announced the armistice on 12 September first.

But as it's common to Obama's Administration, 'something went wrong'. Russia though got signals that the treaty would not be implemented as early as during the negotiations. If the Americans had frankly intended to divide 'moderate' fighters and terrorists, they would have not make a secret out of the agreements.

The secret is that 'moderate' groups are defined there, which were surrendered to Russia as terrorist ones by the US. The US Administration is afraid of terrorists' reaction to treachery. The secret status also allows not to recognize the agreement as an international one. Washington vetoed its discussion at the UN Security Council, although Russia supported its disclosure.

Castello road is a litmus test of the agreement

In fact the failure was evident as early as on Sunday, when the US Air Forces bombed positions of the Syrian army in the city of Deir ez-Zor, which is located in the centre of the country, far from Aleppo. And the state of affairs here is clear as day. 'You should realize that the Syrian army was deployed on the hills, the US struck from several aircraft,' Adviser to the Syrian President Buseyna Shaaban claimed.

Because of this airstrike about 60 military men were killed, more than 100 are wounded. 'As soon as Washington delivered the strike, terrorists went on to attack from the same side. It was evident for everyone being at the battlefield at the moment that it had been properly coordinated between aviation and terrorists,' Buseyna Shaaban explained.

A week before the Syrian army unblocked the Castello road according to the agreements, but no response actions followed from the 'moderate' fighters. The US and groups of Syrian opposition which they back, fulfilled none of their obligations under the Geneva agreement, representative of the Russian Armed Forces' General Staff Lieutenant General Sergey Rudskoy said.

It should be added that Russia requested Sunday data to contact warlords in order to coordinate withdrawal of forces, but it got no answer. 'Taking into account that terms of ceasefire regime are not implemented by fighters, we consider it's maintenance by the Syrian government forces on a unilateral basis to be senseless,' Rudskoy concluded.

Response of the Syrians for Deir ez-Zor is logical

Even if the Syrians struck the aid which was going to fighters in a so-called humanitarian convoy from the air or with artillery, they made it absolutely justifiably, it was a payment for Deir ez-Zor.

The question is does Russia need diplomatic breakthrough at such price? The Coordination Centre has not been created, on the contrary, the situation has aggravated, a risk of open clash between Russia and the US has increased. 'We observe not separation but merger of the moderate opposition units with the Jabhat al-Nusra and preparations for joint offensive acts,' Rudskoy said. Beside that, the Russians should be ashamed of lives of dozens of soldiers.

I'd like to think that Russia will not stake on the American Administration of Obama-Kerry no more and will wait till November. The compromise is possible only with those who want changes. And I'd advise the new US leaders to learn classic, namely to read Otto von Bismarck once more: 'Do not expect that once taken advantage of Russia's weakness, you will receive dividends forever. Russians always come for their money. And when they come - they will not rely on the Jesuit agreement you signed, that supposedly justify your actions. They are not worth the paper it is written. Therefore, with the Russians you should use fair play or no play. '