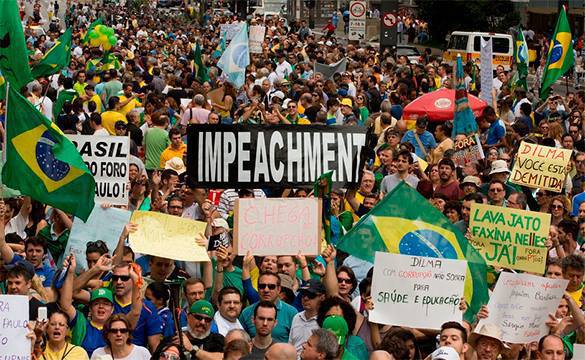 In Brazil, opposition is going to hold protest marches against Brazilian President Dilma Rousseff. Actions of protest are expected to take place in more than 25 cities across the country on March 15. In São Paulo, a 200,000-strong rally is expected under the slogan "Down with Dilma." Is it possible to mobilize the population against the party that has been able to significantly raise the living standard in the country during 12 years of rule?

It is quite possible that the CIA is involved in the plan to stage riots in Brazil nationwide. Over the recent years, BRICS has become the main geopolitical threat to the United States. One of today's top issues for the Western press is to retrieve balance in the global monetary and financial system. This is a potent threat that BRICS poses to the US and the US dollar.

The US has been trying to destroy and crush Russia through the crisis in Ukraine, sanctions and collapsing oil prices. They took effort to shatter stability in China through the "revolution of umbrellas" in Hong Kong. In India, the Common Man's Party is trying to make way to power. In Brazil, the Americans try to implement the scenario of the Latin American spring, similarly to what they do in other sovereign countries of the region - Argentina and Venezuela.

On March 15, about 20 organizations will take to the streets of Brazilian cities under the auspices of opposition for a nationwide protest against the Workers' Party (PT) and its leader - Dilma Rousseff. They are the movements of social networks. Many will be carrying slogans about the impeachment of the president. Media stars, such as singer Lobão, a Russian Makarevich, are expected to participate as well. Opposition Senator from Sao Paulo, Aloysio Nunes Ferreira (PSDB-SP), said that he would prefer to see President Dilma "bleeding" rather than retired.

The reasons, for which Washington wants to get rid of Dilma Rousseff, are easy to understand. She signed the agreement about the establishment of the New Development Bank with the initial registered capital worth 100 billion reserve fund, as well as additional $100 billion. Rousseff also supports the creation of a new world reserve currency.

In October 2014, Dilma Rousseff initiated the construction of 5,600 kilometer-long fiber-optic telecommunications system across the Atlantic to Europe. If successful, the project, conducted with the participation of the state-owned company Telebras,  will undermine the American monopoly in the field of communications, including the Internet. The new communication system will guarantee protection against NSA's espionage. Telebras president told the local media that the project would be developed and implemented without the participation of any American company.

Dilma Rousseff also prevents the return of USA's major oil mining companies to the oil and gas market of Brazil. The country is rich with huge deposits of oil, the unconfirmed reserves of which exceed 100 billion barrels. However, it was during Lula's presidency, when Brazil opted for the Chinese state-run company Sinopec.

In May 2013, US Vice President Joe Biden paid a visit to Brazil in order to convince Dilma Rousseff to grant US companies access to Brazilian oil fields. Biden returned to the USA empty-handed. Immediately thereafter, a wave of protests swept across Brazil as people were protesting against the rise in prices for public transportation by ten percent. Dilma Rousseff's rating collapse from 70 to 30 percent. All that happened a year before the presidential election.

During this period, the Americans were consistently destroying Rousseff's regime  through other protests. They included large-scale protests against excessive costs on the World Cup and insufficient funding of social welfare programs and health care. There were clashes with police and violence. All of a sudden, the Brazilians forgot that the Workers' Party had taken around 30 percent of the population out of poverty with the help of public support programs. Hunger and illiteracy became history. Was it became of short memory? No, as the CIA knows very well how to brainwash people through subordinate media.

Immediately after Biden's departure from Brazil, it was reported that Dilma Rousseff was implicated in the scandal connected with the state-run oil company Petrobras. Rousseff was accused of receiving a commission on contracts with the oil corporation. The money was allegedly used to buy votes in the parliament.

The most recent attempt to remove Rousseff from power was made in the October 2014 elections, when PSDB candidate Aecio Neves could take office as President. If Neves had been elected President, Brazil's new Finance Minister would have been Arminio Fraga Neto. Neto holds dual citizenship (second - US); he is a close friend and former partner of George Soros and his hedge fund Quantum. The Minister for Foreign Affairs would have been Rubens Antonio Barbosa, a former ambassador to Washington, who currently serves as the director of Albright Stonebridge Group (ASG) in Sao Paulo.

Preparing a color revolution in Brazil

The Foundation is headed by Madeleine Albright, a well-known maker of color revolutions. According to Wikileaks, Jose Serra, one of the leaders of the PSDB, promised his protection to Chevron in case of election victory. However, despite of vote manipulation in Sao Paulo, Dilma Rousseff won a second mandate.

Gene Sharp, author of "From Dictatorship to Democracy," described 198 nonviolent actions to overthrow legitimate governments. If generalized, they can explain formulated as follows.

Step 1: Processing public opinion on the basis of real disadvantages, promoting discontent through the media, emphasizing such perturbations as deficit, crime, unstable monetary system, incapacity of state leaders and their accusations of corruption.

Step 2: Demonizing authorities through the manipulation of prejudice saying, for example, that all Brazilians (Russians, Chinese) are all corrupt, holding public actions in defense of freedom of press, human rights and civil liberties, condemning totalitarianism, revising history in favor of the forces that must be brought to power.

Step 3: Working on the street: channeling conflicts, promoting the mobilization of opposition, developing combat platforms that embrace all political and social demands, compiling all kinds of protests, skillfully playing on errors of the state, organizing demonstrations in order to block and capture state institutions for the radicalization of clashes.

Step 4: Combining different forms of struggle: organizing pickets and symbolic capture of state institutions, psychological warfare in the media and promotion of clashes with the police, to create an impression of uncontrollability, demoralizing the legitimate government and law enforcement agencies.

Step 5: Staging an institutional coup on the basis of street protests, calling for the president's resignation.

What stage of the color revolution is happening in Brazil today? It is up to our dear reader to decide. The situation exacerbates in front of our very eyes and it appears that the Brazilian authorities turn a blind eye on the activities of US intelligence under their noses. In Brazil, CIA, DEA and the FBI officers work legally under the guise of the struggle against drug trafficking. NGOs and foundations sponsoring color revolutions work in the country as well.

Venezuelan journalist Jose Vicente Rangel reported that about 500 employees of US intelligence services arrived at US embassies in Venezuela, Bolivia, Argentina, Brazil, Ecuador and Cuba to work as a network to destabilize democratic regimes in these countries. What will happen afterwards? We can already see an example of it in Ukraine.

Russia to sell its best air defense complexes to Brazil