Former U.S. Secretary of State Madeleine Albright turned 75 years old. She made history as the first woman at such a high office. She can hardly be called a friend of Russia. A native of the Czech Republic, she strongly advanced NATO to the Russian borders. She is remembered by the bombing of Yugoslavia. She is credited with a desire to take Siberia away from Russia. 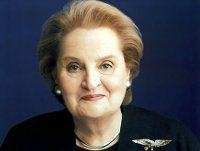 Can the foreign policy of the world's strongest power be represented by a woman? It had been long thought that the answer was "no". But this conventional wisdom was refuted by Madeleine Albright. A native of Prague, she became the first ever female U.S. secretary of state. She could have become the first female president of the Czech Republic, but it did not happen. In Russia she is considered a "hawk" who dreamed of robbing Russia of Siberia. Is that true?

Madeleine Albright was born on May 15, 1937 in Prague. Her name was Mary Jan Kerbelova. Her father Joseph Kerbel was a prominent Czechoslovak diplomat, who accepted Catholicism over Judaism for the sake of his career. As for the name "Madeleine", this was the nickname the future U.S. Secretary of State was given by her grandmother. Gradually the nickname replaced her real name.

As a child, Marie-Madeleine Jana had to move a great deal. In 1939 the Nazis occupied Bohemia and her family fled to London. In 1945, Madeleine returned to Prague, then her father became the Ambassador of Czechoslovakia to Yugoslavia. In 1948 Communists came to power in Prague. Joseph Kerbel flatly refused to cooperate with the new regime and went to the United States. Hostility towards the Communists and the Soviet Union was passed on to his daughter.

Madeleine had no problems with the English language because of her childhood spent in London. She graduated from the Faculty of Political Sciences in Massachusetts, and then - Columbia Law School. She was fond of journalism since young age, and wrote for a variety of publications, the most famous of which was The New York Times.

When Madeleine was the Secretary of State, she was perceived by many as an iron woman without nerves and emotions. But, unlike her successor, Condoleezza Rice, Albright was never deprived of male attention. At the age of 23, Madeleine Kerbelova married Joseph Albright who had good connections in the American elite. They had three daughters. The family survived a tragedy when one of their children was born dead.

The marriage was short-lived. In 1983, Joseph left Madeleine. Eyewitnesses claim that it was very difficult for her to go through a divorce and for a very long time she could not forgive her ex-husband. It was not easy for her to go to Moscow in 1997. And it was not only about the uneasy Russian-American relations. Joseph Albright worked at the U.S. Embassy in the Russian Federation. Madeleine, an impervious diplomat, was barely able to contain herself.

But she was at the peak of her career then. Her ascent to the summit of the American diplomacy began in 1972. Madeleine Albright joined the Democratic Party and the team of Democratic Senator Edward Muskie. In the years of Jimmy Carter (1977-1981) she entered the National Security Council. Likely, it mattered that the assistant to the president for national security was another a native of Eastern Europe - Zbigniew Brzezinski.

Then came the long years of the Republican rule, and until the arrival to the White House of Bill Clinton in 1993, Madeleine Albright was a professor at Georgetown University. She worked there with the issues of Eastern Europe and the USSR. Despite persistent opposition to the Soviet Union, she has mastered the Russian language and spoke it well.

In 1993, Albright was the U.S. permanent representative to the UN. There, she has become known as "Hawk." She pushes the sanctions against Yugoslavia, advocated for the bombing of the Bosnian and Croatian Serbs. Her second "specialty" was the sanctions against Iraq. One day she was pointed to the fact that as a result of the sanctions in Iraq, half a million children had been killed. "I think it's a very hard choice, but we think it was worth it," said Albright. It is said that she later regretted her words.

When Albright was still working at the UN, she was asked about the prospects of taking the U.S. Secretary of State post. She expressed confidence that she would not be given the post of head of the American diplomacy. She said that the American society was not ready for a woman at that important public post. She was mistaken. In 1997, Bill Clinton appointed her Secretary of State. For the first time a woman led the U.S. Department of State.

As Secretary of State, she will be remembered for two acts: the expansion of NATO to the East and the bombing of Yugoslavia. Being a native of Prague, she strongly lobbied for the accession of the Czech Republic and other former socialist countries to the North Atlantic alliance. All the objections of Russia were swept aside. In 1997, the Czech Republic, Poland and Hungary joined the ranks of NATO. Thus began the advancement of U.S. military vehicles towards Russia's borders.

In March of 1999, Albright was among those who made the decision to bomb Yugoslavia. It is interesting that she spent part of her childhood in Belgrade with her father. She knows the local language. At one time her father left for the West from Yugoslavia. But for the sake of U.S. interests in Europe and NATO's eastward advance her personal issues were swept aside.

In 2001, Albright left the post of Secretary of State, but did not leave active politics. Theoretically, she could have become the president of her native Czech Republic. In 2003, Vaclav Havel who favored her had to go. But it did not happen.

The Czech society was critical about the bombing of Yugoslavia. During a visit to the motherland in 1999, Albright was thrown foreign objects at. She was already an American, not Czech. She was not perceived as their own, so she did not become president. It is unlikely that she regretted it. In the end, the post of the U.S. Secretary of State is much better, although the Czech president Vaclav Havel and Vaclav Klaus also played a significant role in politics.

After retiring from all her positions, Albright, however, constantly spoke on the key international issues. Many of her statements are related to Russia. She is attributed the scandalous phrase "Siberia is too large and rich to belong to one country." But the source of such a declaration has not yet been found. However, this does not make her a friend of Russia.

Russia in recent years has been repeatedly battered by Albright. She criticized George W. Bush for being too soft towards Russia. She condemned nearly everything in Russia: the suppression of armed rebellion in Chechnya, politics in the post-Soviet space, the state of democracy. In 2010, she said that Russia had no business telling the U.S. who it should accept into NATO - Ukraine, Georgia or anyone else.

Albright is a regular at gatherings of almost all anti-Russian hangouts along with Zbigniew Brzezinski, Mikhail Saakashvili, Jaroslaw Kaczynski, and other ardent ill-wishers of Russia. Yet, among them, the former U.S. Secretary of State still looks like a dove. For example, she criticized Sen. John McCain who called to exclude Russia from the G8. Her approach to the Russian Federation can be reduced to the following sentence: "To pressure, severely criticize, but still cooperate."

The name of Madeleine Albright will forever remain in the history of the world diplomacy. She will be remembered as a harsh "lady with a brooch," the war in Yugoslavia, and moving NATO eastward. Russia is unlikely to have good memories about her. However, Albright staked out a solid place in the pantheon of the world's prominent politicians of the twentieth century.