The US Vice-President goes to the Ukraine, reiterating the same idiotic comments his Government has been churning out for almost two months, namely slanderous anti-Russian rhetoric and threats of sanctions while he shakes the hands of Fascists or those supported by Fascists who called for the deaths of Russians and Jews. 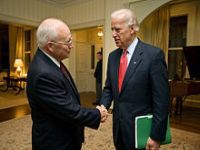 Is Joe Biden completely stupid? He claimed that the USA stands with Ukraine's "new leaders". What "new leaders"? A group who staged a Putsch against the duly and legitimately elected President in February? So the United States of America stands for deposing elected Governments at will, the United States of America does not believe in a democratically elected Government staying in power until it is democratically replaced by a different Government, in the ballot box? Figures. One only has to Google up the recent history of the USA across the globe to see that its hypocrisy is an endemic and permanent part of its policies.

Is Joe Biden completely stupid? He makes accusations against Russia, stating that Moscow is stimulating unrest in the East of the country. To make an accusation, you have to have something to back it up, some substance, some evidence, some proof. If not, you render yourself open to accusation of being a cheap-talking, slanderous guttersnipe.

Is Joe Biden completely stupid? What "provocation" has Russia committed? Did Russia stage a coup d'état in Ukraine? Did Russia organize snipers to fire at the police and then at the crowds of protesters from the eighth and ninth floors of Hotel Ukraina, where the "opposition" forces were camped? Did Russia chant anti-Russian slogans in Kiev during the unrest in February? Did Russia call for the deaths of Russians and Jews? In shaking hands with those who rose to power with this as a backdrop, does Joe Biden therefore associate himself with these acts? And if not, then where were his words of criticism? His visit to Kiev was paramount to sitting down, knowingly, to dinner with a murderer.

Is Joe Biden completely stupid? Did Russia seize power and immediately enact anti-Russian edicts? Did Russia torture and mutilate politicians belonging to Eastern Ukraine? Did Russia hold an illegal act in the Ukrainian Rada (Parliament) deposing a democratically elected President and calling for his death? Did Russia break Ukrainian law?

The answer to all these questions is a resounding NO! So is Joe Biden completely stupid?

Is a "humiliating threat" the act of urinating in someone's food, forcing a Moslem to eat pork, throwing snakes at a detainee, forcing detained men to dress as women and be sodomised, deprive people of sleep and maintain a concentration and torture camp at Abu Ghraib? Or is that all "sterling behavior"?

Is Joe Biden completely stupid? Kiev signed an Agreement in Geneva on April 17 promising to end violence in Ukraine. Since then Russia has called on separatists to leave the occupied buildings but since Russia does not control these separatists, since these separatists are Ukrainian citizens who do not want to live under a Fascist Putsch regime from Kiev, and who are asking that their voices be heard, it is patently obvious that Russia does not control their actions. And if the Putsch leaders in Kiev signed the agreement to end violence, what are Fascist thugs sent from Kiev doing creating martyrs in Donbass?

Is Joe Biden completely stupid? In stating that "No nation has the right to simply grab land from another nation" then supposing he inform himself of what his country did in Serbia, where the heart of the Serbian nation, Kosovo, was pulled out and handed to Albanian terrorists, the Ushtria Çlirimtare ë Kosovës (Google up the McCain-Biden Kosovo Resolution)? And as regards his statement "We will never recognize Russia's illegal occupation of Crimea," is Joe Biden completely stupid, or what?

What occupation? And what "illegal occupation"? How "legal" is the "Government in Kiev? You know, the Fascists and al-Qaeda wannabes who seized power or supported those who did, you know the ones who called for the death of Russians and Jews, the ones that Joe Biden stood beside, shook hands with and smiled inanely at yesterday. How "legal" is a Putsch? How "legal" is it to remove a President without using one of the four motives allowed by law?

If Joe Biden does not understand the meaning of a democratic Referendum, if he doesn't understand the answers to all these questions, there are two apparent conclusions. First, he should not be Vice-President of the USA (Supposing someone "removed" him as they did with Viktor Yanukovich?) and secondly, the answer to my repeated question here seems to be: Yes, he is!