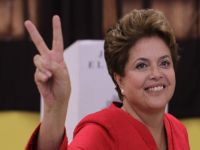 Dilma Roussef was born in 1947, the daughter of a Bulgarian father and a Brazilian mother. After the Fascist dictatorship was set up in the 1964 coup, she joined the cause of the freedom fighters fighting against the regime. She was captured, jailed and allegedly tortured between 1970 and 1972.

An economist, Dilma Rousseff started her political life after release with the Democratic Labor Party. She was Secretary of the Treasury of Porto Alegre (capital of Rio Grande do Sul in Southern Brazil), then Secretary of Energy in the State, before she joined the Partido dos Trabalhadores (PT) in 2000.

Two years later she was the spokesperson for energy in the cabinet of President Lula, and after his election in his first term, she became Minister of Energy. In 2005, she replaced José Dirceu as Chief of Staff (like a Prime Minister), until she resigned in 2010 to run for her first Presidential term.

This term was accompanied by some high approval ratings, the result no doubt of the popular social measures undertaken by the PT during Lula's Presidency and carried on by Dilma's administration. The PT was, and has been, synonymous with social programs which have raised tens of millions of Brazilians from poverty into the middle class.

Fome Zero (Zero Hunger) eradicated hunger in Brazil, with measures to create irrigation systems in the driest regions of the country; measures were also taken to combat teenage pregnancy, family agriculture was supported with the distribution of advice and money; the Family Allowance (Bolsa Família) ensured that children attended school while their families were supported; the Growth Acceleration Program (PAC) was an investment program worth over 300 billion USD aiming to create new infrastructures

All of these programs were continued during Dilma's tenure...but she had the misfortune to be President during the unrest which occurred during the World Cup in 2014. The focus of the opposition to the World Cup was that FIFA imposed quality standards for stadiums which were far superior to those implemented in the public healthcare and education systems. In fact this was not totally fair: the Brazilian government spent ten times more on healthcare and education than it did on the FIFA World Cup.

Projects to build hydroelectric dams in the Amazon, directly affecting the lives of indigenous populations, were also highly unpopular. However, the opposition could not make inroads on Dilma's popularity. What many foreign media outlets do not report is the fact that Dilma represents a coalition of the PT, PMDB, PSD; PP, PR, PROS, PDT, PCdoB and PRB.