Russia to sell its best air defense complexes to Brazil

The head of the General Staff of Brazil, Jose Carlos de Nardi, said that Brazil will buy Igla (Needle) portable air defense systems and Panzer-C1 air defense systems from Russia. Moreover, Brazil will receive the technologies and the right to build a plant for their assembly in the country. It is quite possible that the Russian Federation will take part in a fundamentally new organizational scheme of Brazil's air defense. 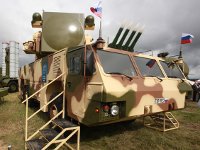 President Vladimir Putin said at the meeting of the commission for military-technical cooperation, which was held in December 2012, that one of the important directions to increase Russian arms exports would be joint research, development and production of military products. He also said that special attention would be paid to such cooperation within the BRICS countries.

Russia has made a great breakthrough in the relations with Brazil. In December 2012, after Brazilian President Dilma Rousseff paid a visit to Russia, Russian company Russian Technologies and Odebrecht Defesa e Technologia of Brazil signed two major agreements. The agreements are about the creation of a joint venture that will assemble multipurpose Mi-171helicopters and service the fleet of combat Mi-35M helicopters (12 aircraft are to be delivered). It was also stated that in January, a Brazilian delegation would visit Russia to discuss the purchase of Russian air defense systems.

The Chief of General Staff of the Armed Forces of Brazil, General Jose Carlos de Nardi, headed the delegation. He was accompanied by experts from Odebrecht Defesa (owns the production of Mectron missiles), Embraer Defesa (produces radars Orbisat) and Avibrás (manufactures Astros missile and anti-aircraft systems).

The General stated that the parties were working on the contract to purchase two batteries of portable anti-aircraft missile system "Igla" and three batteries of air defense systems, Panzer-C1. The contract stipulates the technology transfer so that the hardware could be assembled in Brazil. The contract is worth more than one billion dollars. According to the newspaper Folha de São Paulo, it will be signed during the visit of Russian Prime Minister Dmitry Medvedev to Brazil at the end of February. The Brazilian newspaper writes that air and missile defense systems are the weakest links in the defense of the country. The newspaper called Russian systems " most modern and efficient weapons in the world."

"The agreement on the transfer of technologies for the subsequent assembly is a  mutually beneficial step. As soon as Brazil get the opportunity for the licensed production of Panzer systems, the country will no longer need to announce an international tender for the purchase of air defense systems. The hardware that will be assembled on the territory of the country will be considered the property of the country," a source told the Kommersant newspaper. "The situation on the arms market leaves tenders in the past, many are willing to work only with the creation of joint ventures. We can not turn a blind eye to this," the source added.

It should be noted that the cooperation with Brazil has its future, because it goes about the creation of a fundamentally new organizational structure of Brazil's air and space defense with Russia's participation. Russian design bureau Almaz- Antey has prepared a presentation prepared for Brazil. According to the project, the country should be divided into 5 groups of echeloned air defense systems using only Russian weapons. It goes about the creation of systems of three echelons of high, medium and short-range missiles, represented by S-300 missile complexes and various modifications of Buk and Tor systems.

The question is whether Brazil will have the money for it, journalists of Folha newspaper wondered. Prior to her visit to Moscow, Dilma Rousseff visited Paris, where she announced the termination of the 5-billion dollar tender for the purchase of 36 fighters. For Russia, it is more of a favorable decision, given that Russian companies did not participate in the tender. Now, given the fact that Russia has decided to transfer technologies, it opens up new opportunities for the participation of Su-35 fighters in the tender, if Brazil revisits it. As for the financing of the new air defense system, it is obvious that the game is worth the candle thanks to undeniable advantages of Russian anti-aircraft missile systems. Thus, the co-founder of Air Power Australia think tank, Dr. Carlo Kopp said that U.S. combat aircraft F-15, F-16 and F/A-18, as well as the promising Joint Strike Fighter, have no chances to survive in the struggle with Russian air defense systems.

"It's hard to say which elements of Russian air defense systems give them a major advantage, as most of them work in a complex. Long-range missiles 48N6E2/E3 and 40N6, as well as new radars with phased arrays of high RF power are very dangerous," Kopp said in an interview with Lenta.ru.

"The new self-propelled anti-aircraft systems, such as Favorit, Triumph, Antey-2500, the systems to protect radars against anti-radar missiles and guided bombs, including rocket and missile-gun system Tor-M2e  and Panzer-C1 also pose serious obstacles to the enemy in suppressing air defense means," Kopp said.

It is no accident that more and more countries (China, Iran, India, Syria, Iraq) want to buy Russian air defense systems. Brazil and Russia conduct their military and technical cooperation under the intergovernmental agreement from 2008. According to Russian Technologies, during 2008-2012, Russia's arms deliveries to Brazil totaled 306.7 million dollars.