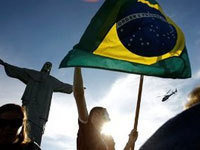 The white race in Brazil has found itself in the minority. Young people in the country refer to themselves to those whose blood is a mixture of different races. The idea of the biological predominance of the white race has never been popular in the country. However, social inequality based on ethnic affiliation has not gone anywhere. The phenomenon still exists under the guise of the myth about racial democracy.

The first population census was conducted in Brazil in 1872. Back in those years, the local population was divided into two categories - free people and slaves. There were Africans among the second category - they made approximately 15 percent of the population. White people were in the majority.

The population census of 2010 opened Brazil's new face: negroes, mulattoes, halfbreed, Indians and other mixed races, which are generally referred to as "Pardu" or "brown" in Brazil. All these races have left the white race behind. More than 50 percent of the Brazilian population (50.7%) declared their affiliation to those races. Ninety-one million of Brazilians out of 191 million think of themselves as white people - 47.7 percent of the population. Fifteen million are black (7.6%), 82 million are mixed (43.1%), two million are "yellow" (natives of Asia, 1.1%) and 817,000 (0.4%) are Indians.

The "Pardu" presumably live in the north and in the north-east of Brazil. They make up 97 percent in several provinces. In the midwest of Brazil, the share of the "brown" races reaches 75% and 37% in the south-east. The white are the majority only in the south, where the "Pardu" races make up only 2.3%. Sao Paulo is the city where the number of black and brown people is the largest (4.2 million). Rio and Salvador follow next with 3 and 2.7 million respectively.

As for the negroes, the leadership belongs to Salvador - the black "capital" of Brazil (80 percent of local residents are black). The white "capital is a town in Santa Catarina.

Brazil is one of the most developed countries from the point of view of racial democracy, although it is not a perfect country, of course. Many of the things that are traditionally referred to as social inequality are historically connected with vestiges of slavery. However, unlike in the United States or in South African Republic, Brazil has never popularized the idea of the biological predominance of the white race.

The word "negro" is not an insult in Brazil. The politically correct term - "African Brazilian" - does not enjoy popularity there at all. The races are mixed with each other, so one may not say that there is one pure race in the country. Many white people in Brazil have black ancestors.

Such a considerable increase of the people who think of themselves as "Pardu" (from 44.7 to 50.7 percent in ten years) means that the majority of Brazilians are proud of their African and Asian roots. However, the social inequality based on the ethnic affiliation has not gone anywhere. About 97 percent of respondents said that they did not have any racial prejudice. However, 98 people said that they know the people who share such prejudice.

The population census has proved that social inequality is still associated with skin color. The white population of Brazil declared the monthly income of 1,538 reais a month. Negroes declared a smaller monthly income of 834 reais, whereas mulattos and halfbreed - 845 reais. It is worthy of note that the "yellow" receive more than the "white". This is connected with the fact that many of them are the natives of Japan. They live on compact areas and work as "white collars."

About 16.2 million Brazilians live below the poverty line - 8.5% of the population. Negroes make up 70.8 percent of this amount. The wages of the white and yellow population of the country are 2.4 times higher than those of the blacks. The lifespan of black people is traditionally shorter. Many blacks live in the slums where the crime level is extremely high and where healthcare is considered luxury.

The majority of those Brazilians, who die either violent deaths or as a result of accidents, are black (aged 15-29). They also have a high level of illiteracy in the age group above 15 - about 26 percent. 57.2 percent of those who received higher education before 24 years of age are white people. Only 18.4 percent of them are black.

The state has been trying to improve the situation. The state tries to introduce racial quotas in state-run universities and give special student loans. As a result, the percentage of black students in the country has skyrocketed from 4 to 16.4 percent in 1998-2008. Young people therefore refer to themselves as "Pardu" because of such policies. In 2010, 18.5 million out of 34 million people declared themselves as dark-skinned.

However, the majority of them still feel like a non-standard element in the Brazilian society. There is no racial hatred, but a colored individual is subconsciously regarded as a crime-prone person with a low level of education and limited financial means. Employers pay first priority to white job-seekers.

Therefore, the Brazilians will continue to celebrate the Black Awareness Day for a long time. The holiday is marked on the anniversary of the death of Zumbi dols Plamares  - a Brazilian from Angola, who fought for the rights of the slaves. He started a slave-free village and was killed on November 20, 1695.