Another day of tender at the Moscow Interbank Currency Exchange (MICEX) ended with the growth of the US dollar against the ruble to 32.2135 rubles per dollar, which marked the absolute record of the US currency in Russia in a decade. The dollar-euro basket continues to become more expensive too, Interfax reports. 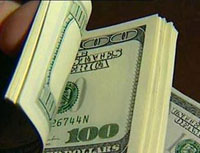 The Central Bank of Russia weakened the ruble against the dual currency basket for the fourth time since the beginning of the year. As a result, the dollar rate went up to 32.2 rubles per one dollar, whereas the euro set another historical record as it hit the level of 42.37 rubles per dollar. The ruble rate against the dual currency basket (0.55 dollars and 0.45 euros) dropped by almost 50 kopeks to 36.8 rubles on the morning on January 15.

Some currency exchange offices in Moscow sell the US dollar at the price of 35 rubles already, RBC reports. Thus, the historical record of the ruble decline was broken today – the US dollar cost 31.88 rubles on January 9, 2003.

The weakening of the ruble will soon stop, dealers say. “The ruble devaluation is good for the Central Bank and everyone else. The sooner the Bank ends the devaluation – and the Bank will end it sooner or later – the sooner it will be able to reduce interest rates,” a foreign bank dealer told the K2Kapital news website.

The speed, at which the Central Bank devalues the ruble, exceeds all expectations. Many analysts believed that the dual currency basket would reach the level of 36-37 rubles in February of the current year, although it will most likely happen already in the middle of January.

Market members say that the ruble may hit another low – 50 or 55 rubles per one US dollar in the event the Central Bank stops its activities on the market.

Russia takes the third place in the world on the amount of international reserves, following China and Japan with $1.946 trillion and $1.003 trillion respectively.