In 2015, Russia dazzles and shocks the West

The main result of the outgoing year is the fact that the Russian population is still optimistic no matter what. The main lesson of 2015: emotions are not good when making important decisions. The lack of feedback is the main obstacle for Russia's development. If Russia is economically strong, she will not have to ask the West for anything - the West will come to give. 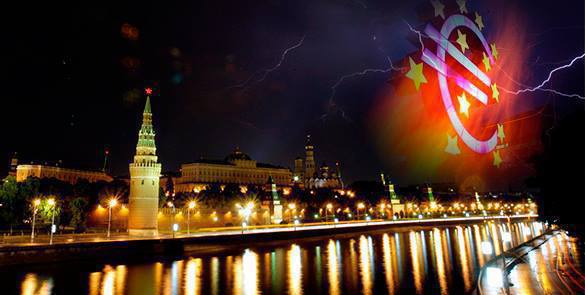 1. May 9 Victory Parade in commemoration of the 70th anniversary of Victory in the Great Patriotic War of 1941-1945. Western leaders ignored the Victory Parade because of the Ukrainian crisis. Polish President Bronislaw Komorowski said that the parade in Moscow was a threat to Poland, as well as to peace in the whole world. The leaders of 30 other countries disagreed with him: they all came to Moscow to celebrate the great anniversary. Chinese President Xi Jinping was among the guests.

"Victory Day has become the most important holiday in Russia, leaving Russian Easter and New Year behind. People were overwhelmed with emotions, as if Nazi Germany has just been defeated. The unity of the people showed that the Russians were ready to defeat any country that could dare  to attack their country, " the Frankfurter Allgemeine Zeitung newspaper wrote.

2. In late September, Russia started the special operation in Syria to support the Syrians in their fight for the future of their homeland. Others - tens of thousands of them - have become European "refugees." One can say that they do not want to die for the "bloody dictator." Not everyone was worshipping Joseph Stalin in the Soviet Union, but when the war started, everyone - old and young - went to war. This is the reason why the USSR won the most terrible war in the history of mankind.

In 2015, as a result of Russia-led military operations, the Islamic State terrorist group (aka Daesh) has lost 40 percent of its territory and 90 percent of its oil production.

3. Throughout this year, the West was trying to make life in Russia harder and worse. Gazprom was accused of violating EU competition rules. The property and accounts of Russian companies were arrested in France and Belgium in mid-June pursuant to the decision of the Hague Court on the 50-billion-dollar suit from ex-Yukos shareholders.

Sanctions against Russia were extended till June 2016. In March 2015 the US sanctions list was expanded as well. On October 23, German Chancellor Angela Merkel made it clear that Russia should not expect the early lifting of sanctions unless the Minsk Accord is fully implemented. The West also committed a few mean acts to humiliate Russia internationally. These include the scandal with the Russian delegation to the Parliamentary Assembly of the Council of Europe, the issuance of restricted visa to Parliament Speaker Valentina Matviyenko for the session of the Interparliamentary Union in New York. In addition, Western rating agencies downgraded Russia's sovereign rating to "BBB-" with a "negative" outlook. France was fannying about its contract with Russia for the delivery of two Mistral destroyers and eventually had to pay a penalty for refusing to execute the contract.

In response to all of that, Russia launched the anti-terrorist operation in Syria. Moscow showed the world that Russia should be reckoned with.

4. The attack on the Russian Su-24 in Syria on November 24 ended with the killing of two Russian military men. For the first time in decades, a NATO country downed a Russian warplane. In response, Moscow imposed tough economic sanctions against Turkey and increased its military presence in Syria. One has to pay for their ambitions, stupidity and arrogance.

It appears that Russia has made an emotional and spontaneous decision to terminate all economic ties with Turkey. In fact, one has to ask questions to the commander of the regiment in Syria. Where was the radar monitoring? Where were escorting fighter jets? In a nutshell, Russia has missed the stab in the back from NATO.

5. To attract world attention, Ukraine introduced food and energy blockade of Russia's Crimea. At first, the country cut the deliveries of Dnieper water and then interrupted bus and train communication. On November 22, saboteurs blew up power lines in the Kherson region of Ukraine, thus suspending supplies of electricity to the Crimea.

As a result, 95 percent of all food products in the Crimea are now of Russian production. The blockade of the Crimea has become another suicidal decision for Ukraine to make.

6. The crash of Airbus A321 passenger jetliner over Sinai, Egypt, on October 31. The crash killed 224 people. The FSB recognized the catastrophe as a terrorist attack. From November 6, all flights between Russia and Egypt were suspended. After the terrorist attacks in Paris on November 13th, the West realized that it was in the same boat with Russia in the struggle against the Islamic State. Soon afterwards, consensus was reached on a political settlement in Syria.

7. On October 13, the Security Council of the Netherlands published a report about MH17 crash in Ukraine. The same day, experts of Russia's Almaz-Antey concern, the maker of Buk missile system, published their version of the tragedy. The conclusions of the Security Council of the Netherlands partly coincided with the results of the investigation of the Russian experts. They both said that the Malaysian airliner was shot down from Buk missile system. However, the Russian company claims that the missile was launched from the territory controlled by Ukrainian law enforcers.

8. The economic crisis in Russia has led to declining income of the population. The loss of real income of Russian families made up 30 percent; the inflation rate in the food sector - about 35 percent. The population is ready to tolerate it in solidarity with the policy of the president, but few people are satisfied with the work of the government.

In March, Putin signed a decree to cut salaries for high-ranking officials by ten percent. Some government actions caused concerns in the Russian society. It goes about the introduction of the tax on capital repairs, the introduction of Platon system for heavy trucks. To crown it all, many Russians were surprised to see sanctioned foreign food products bulldozed into mud.

There are positive results of the crisis that Russia had to experience in 2015. The head of the Central Bank kept the floating exchange rate of the Russian ruble, thus giving a chance for the development of import substitution. The country has learned to live under new economic conditions. Nine territories of priority development were created in the Far East of Russia. Russia continues its work on "constructions of the century" - Vostochnd Spaceport, Kerch Bridge to the Crimea and stadiums for World Cup 2018.

9. The rise of the Greek SYRIZA coalition against Brussels, as well as the emergence of third political forces in the parliaments of Spain and France has showed that the EU is experiencing big problems with austerity measures.

10. The fall or weakening of leftist regimes in Latin America testifies to the crisis of left-wing ideology on the continent, where nationally oriented parties traditionally have a high level of support. In Brazil, President Dilma Rousseff is subjected to severe pressure from the opposition.  We can say that Moscow has missed all these changes, but one needs to have extensive financial resources to be able to influence all these processes, let alone diplomats and diaspora support.