Obama to ignore celebrations of 70th anniversary of Victory in Moscow

US President Barack Obama is not going to pay a visit to Moscow to celebrate the 70th anniversary of Great Victory over Nazi Germany. Earlier, US officials would give evasive comments on the subject, making it clear that a trip to Russia was not in Obama's  plans. However, White House national security adviser Ben Rhodes told reporters on Monday that he did not expect that the USA would participate in the celebrations on the level of the head of state. 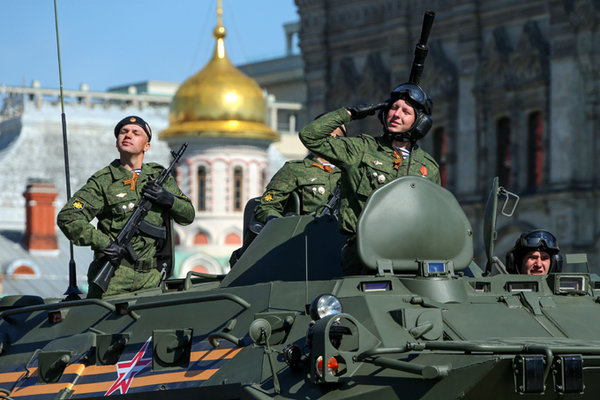 "I guess you won't be surprised that President Obama does not plan a trip to Moscow," said Rhodes, answering a question from a South Korean journalist, who wondered whether Obama could meet North Korean leader Kim Jong-un in Moscow on May 9th. "Other countries make their own decisions," Ben Rhodes added, TASS reports.

At the same time, the national security adviser to the US president assured that the United States "greatly respected" Russia's role in the defeat of Nazi Germany. According to Rhodes, this can be seen in marking "all anniversaries associated with WWII." "Disagreements over Ukraine do not diminish the importance of our common history," Rhodes was quoted as saying by TASS.

The press secretary of Russian President Vladimir Putin, Dmitry Peskov, told Interfax that he had no information to confirm Obama's decision not to come to Moscow to celebrate the 70th anniversary of Victory: "When the information about all participants of the May 9th celebrations is summarized, we will make a  statement accordingly."

Not that long ago, US Ambassador to Russia John Tefft, responding to a similar question, stated that he had no information about Obama's possible arrival to Moscow in May 2015 to celebrate the 70th anniversary of Victory. "I have not heard anything about it. As far as I know, there are no such plans," said the diplomat.

At the end of 2014, Putin's aide Yury Ushakov said that Moscow had sent invitations to leaders of foreign countries, including Barack Obama, to celebrate the 70th anniversary of Victory. The invitations were sent on the lists from the previous anniversary, Ushakov added. According to him, Russia invited all countries, members of the anti-Hitler coalition, Russia's closest allies, as well as largest and most influential partners, including the BRICS countries.

Some of the countries responded to Moscow's invitation immediately, while others gave no answer. Ushakov confirmed that Moscow had sent an invitation to US President Barack Obama.

Soon afterwards, a spokesman for the National Security Council at the White House, Mark Stroh, said that Barack Obama had no plans to visit Russia in the near future. The following day, Celeste Wallander, Special Assistant to the President and Senior Director for Russia and Eurasia on the National Security Council, explained that Obama had not turned down Moscow's invitation for the celebration of the 70th anniversary of WWII end.

It goes without saying that Russia sent a personal invitation to German Chancellor Angela Merkel. Reportedly, German President Joachim Gauck will visit a military cemetery in Brandenburg, where he will honor the memory of the fallen Soviet soldiers. As for Merkel, it remains unknown, whether the German Chancellor accepts Putin's invitation. Noteworthy, Merkel participated in the celebrations of Victory Day in Moscow in 2010.

After the relations between the West and Russia aggravated on account of the Ukrainian crisis, Obama and Putin have met only twice - during the celebrations of the 70th anniversary of the D-Day landings in Normandy and at the G20 summit in Brisbane. The meetings were insignificant, as the two leaders could only exchange a couple of unimportant phrases.

Russia will mark the 70th anniversary of Victory on May 9, 2015. Military parades in honor of the holiday will be held in 26 cities of Russia. The main parade will be held on Red Square in Moscow.

Noteworthy, President of Latvia Andris Berzins and President of Lithuania Dalia Grybauskaite refused to come to Moscow for the celebrations of the 70th anniversary of Great Victory. The leaders of the Baltic countries explained their decision with Russia's position on the Ukrainian crisis.