Putin speaks in Vladivostok. Everyone listens

Russian President Vladimir Putin made a speech at the plenary session of the Eastern Economic Forum (EEF) in Vladivostok, in Russia's Far East. During his speech, Putin commented on the recent riots in Kiev, unveiled details of his conversation with US counterpart Barack Obama and expressed his point of view about the current migrant crisis in Europe. 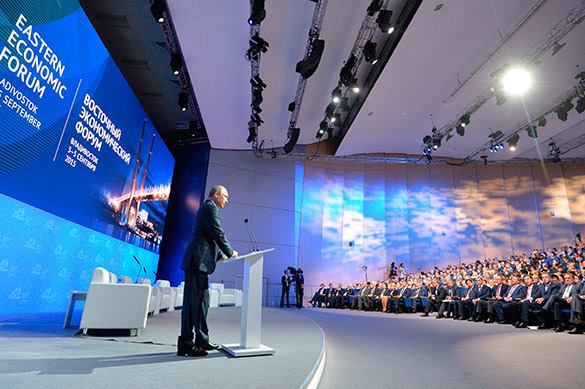 Putin said that in the Far East, Russia offers its partners exclusive conditions for competition. The head of state added that the work with investors to promote projects in the region would continue. According to Putin, the development of the Far East is a historically successive course for Russia. Putin instructed the government to determine the sources for the capitalization of the fund for the development of the region.

What is happening in Ukraine now is Bacchanalia

Speaking about the riots near the Verkhovna Rada in Kiev that claimed the lives of three fighters of the National guard, Putin said: "As for the tragic events near the Verkhovna Rada, I believe that they were in no way related to changes in the Ukrainian Constitution, because what is being proposed there today as changes is entirely declarative and does not change the structure of power in Ukraine at all," the Russian president said.

The current events in Ukraine mark another edition of the political standoff in Ukraine," Putin said. "Amendments to the Constitution are used just as a pretext to exacerbate the struggle for power," Putin said. What is happening now in Ukraine is "Bacchanalia," Putin said.

According to him, Ukraine was put into a state of external administration. "All key positions in the government, and now in key regions, are taken by foreigners, and I think that this is an insult for the Ukrainian people," Russian President Putin said.

Russia not ready to fight against ISIS

Russia proposes to create an international coalition to fight terrorism and extremism, said Putin. The President of the Russian Federation has discussed this issue with a number of world leaders, including presidents of the United States, Turkey and Egypt, the leadership of Saudi Arabia, and the King of Jordan.

"In general, there is understanding that this union of efforts in the fight against terrorism must go hand in hand with a political process in Syria. The president of Syria, by the way, agrees with that and is ready to hold early elections, for example, to the Parliament, to establish contacts with the so-called healthy opposition to bring them to the administration," said Putin.

Yet, it is too early to affirm that Russia is ready to take part in military operations against the Islamic State, Putin said.

"We do want to create an international coalition to counter terrorism and extremism, and we have consulted our American partners on the subject. I have personally talked to US President Obama about in on the phone. I have also discussed this with the president of Turkey and the leadership of Saudi Arabia," said Putin.

"If we combine efforts in these directions, then we will achieve positive results. If we act separately, if we argue about quasi-democratic principles and procedures in some territories, it will take us to a greater dead end," said the Russian leader.

Migrant crisis in Europe: Is anyone surprised?

As for the ongoing crisis with migrants in Europe, the Russian president believes that it was to be expected.

"You know, we have said that many times: I believe that this is an absolutely expected crisis," Putin said. "If you remember, if you dig into archival documents, we in Russia, including your obedient servant, said a few years ago that there would be large-scale problems if our so-called Western partners continued to pursue wrong, as I have always said, policy, especially foreign policy, in the regions of the Muslim world in the Middle East and North Africa that they are still pursuing," Putin said.

"What kind of policy is that? It is about imposing one's own standards, disregarding historical, religious, national and cultural characteristics of these regions. First of all, this is the policy of our American partners," Putin said.

"It surprises me when US media outlets criticize Europe for the excessively tough actions, as they believe, in relation to migrants", Putin said. According to him, the United States does not have such problems with migration, whereas Europe suffers a lot as it blindly follows US instructions, the Russian president said.

After the speech, Vladimir Putin paid a visit to the aquarium on the island of Russky. Putin was joined by Vice-Premier of the State Council of China, Wang Yang and famous Hollywood actor Steven Seagal. During the tour of the aquarium, the Chinese official pointed out Putin's and Seagal's common interests in martial arts. Wang Yang jokingly suggested they should fight on the ring. "I would not do that," Putin said smiling.

When the Russian czar goes fishing, Europe can wait

Putin does not see USA as strategic partner

Putin: Russia fears nothing as long as Russians stay strong and united