A Parable of the European Migrant Crisis

We are all Aylan, the three-year-old Syrian boy found lying face down, drowned, on the Turkish beach of Bodrum, along with his five-year-old brother Galip and their mother, Rihan. It is reported that Canada refused their application for asylum as they fled the terror of Islamic State in Kobane. They died at the gates of Europe. Welcome to the European Union. 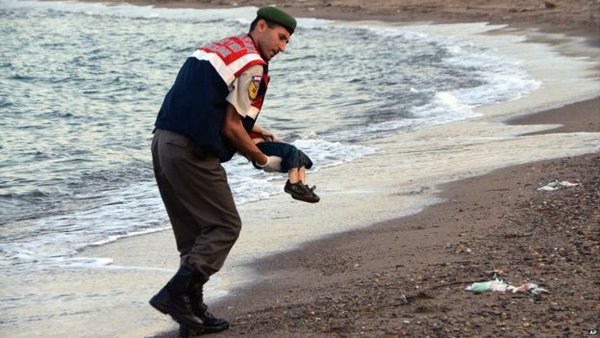 Left behind, his life in ruins, is the father, Abdullah, no doubt remembering the family's last moments together and replaying the nightmare that will haunt him day and night for the rest of his days.

Once upon a time, the people of the Southern Lands lived together, usually in peace. Sometimes there was a skirmish over land or grazing rights, usually solved by a meeting of the Council and rarely did it develop into a battle. The land was fertile, people had plenty to eat and plenty to drink.

But gradually, the skies darkened, the wind blew cold from the North and something sinister brewed in the Big Sea on the horizon. The boats brought marauding bands of white barbarians who plundered the lands, raped the women, slaughtered the men and children and set up colonies along the coastline, channeling the resources they stole into them to ship them off to the Northern Lands on the other side of the sea.

They did the same elsewhere across the Great Ocean to the West but the people there fell sick and retreated into the forests so the white men of the Northern Lands rounded up the peoples of the Southern Lands, packed them into ships, chained together with just enough room to sit, transported them for months across the water half-lying in a sea of excrement, then sold them like cattle as slaves, torn away from their wives and families. Many of those they sold as slaves were better educated than their captors, and were murdered for reading or writing.

As if this were not enough, the white men of the Northern Lands moved out of the colonies they built, and not only stole the jobs and livelihoods of the peoples of the Southern Lands, but ruled them as their self-elected governors and murdered those who resisted, strafing entire tribes with machine guns - they had not yet invented flying machines - crying "shoot when you see the whites of their eyes". As time went on, they educated the leaders of the Southern peoples, teaching them their own standards and rules, which might have made sense in the Northern Lands, and used them to direct the resources of the Southern Lands northwards. Those who refused were removed and murdered, and the second most powerful group was placed in power, knowing that they would remain there so long as they supported the white men and ensured a continuation of resources flowing in one direction - outwards.

These policies destroyed the social and ethnic fabric of the Southern Lands - hundreds of millions of people were directly affected - and the economic balance which had ruled the Lands for thousands of years was turned upside down within a few decades.

As the Northern Lands continued to plunder and murder abroad, they also fought amongst themselves, exhausting themselves in two Great Wars. After the second, a New Power arose from the East, a new socio-economic model geared towards social progress and development was offered to the Southern Lands and help was provided for them to free themselves from the yoke of imperialist tyranny.

This achieved, the New Power set about building schools, hospitals, highways and other social infrastructure, educated millions of people to University level and prepared them to coexist in a world dominated still by the white men from the Northern Lands and their colonies across the Great Ocean.

Jealous that another Power was dealing with those it had oppressed for centuries, the Northern Lands set about sabotaging the socio-economic model of the New Power and spent trillions of dollars in blocking and destroying the progress it had made. The new education systems set up in the Southern Lands, which were within thirty years producing students better qualified than those in the Northern Lands, collapsed and were turned into businesses, the healthcare systems followed and the Southern Lands fell back into economic limbo, caught between their roots and a modern world which was not supposed to cater for them, but rather to bring their resources northwards.

To ensure the continued flow of these resources, bad men were backed to fight the leaders collaborating with the New Power and these bad men ruined their lands even further, syphoning off tremendous amounts of money into their own accounts in banks based in the Northern Lands as a reward for their services.

A few good leaders resisted. Loved by their people, it was impossible to remove them by democratic means, so the Northern Lands used a new tool - terrorism, to create mayhem and chaos and anarchy in their societies, to the point where the authorities collapsed and the Lands were invaded by gangs of heavily-armed bandits who pillaged villages and towns impaling children on stakes, beheading boys for worshiping the wrong God, slicing the breasts off women in the streets, raping the decapitated bodies of others, setting fire to old ladies and torturing men to death, gouging out their eyes with spoons and tearing out their hearts, eating them while they were still hot and pumping with blood.

Terrified, the residents of these Lands fled. They were the Desperate People. The Rich Kings of the Middle Lands to the East, those who preached piety and adoration of their God but spent their free time committing sodomy with young boys in Morocco while drunk on spirits from the Northern Lands (where else?) spoke much about helping these Desperate People. They spoke but slammed their doors shut.

So the Desperate People had nowhere to turn except to the Northern Lands, which had colonized them, enslaved them and stolen their resources - many had relatives living there, others claimed the right to asylum because the activities of the Northern Lands over the years had made their lands uninhabitable.

After centuries of arrogance, bullying, chauvinism and devastation, the Northern Lands also slammed the door, saying these people had no right to live in the North and had to fend for themselves.

We are all Aylan, the three-year-old Syrian boy found lying face down, drowned, on the Turkish beach of Bodrum, along with his five-year-old brother Galip and their mother, Rihan. Canada refused their application for asylum as they fled the terror of Islamic State in Kobane. They died at the gates of Europe. Welcome to the European Union.