When the Russian czar goes fishing, Europe can wait 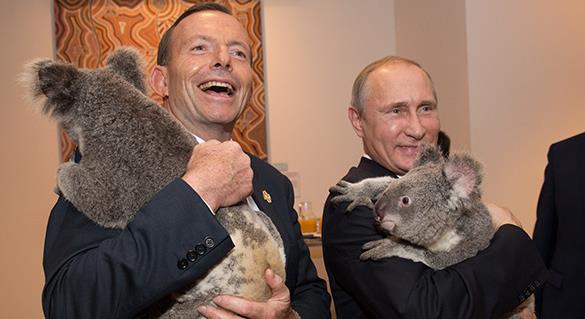 Today, one can draw conclusions from Vladimir Putin's interview to German TV channel ARD and his visit to Brisbane for the G20 summit. The president clearly indicated his intention to support the People's Republics of Donetsk and Luhansk, substantiated Russia's strong economic position and made it clear that the West could accuse and threaten as much as it wanted to, but the "Russian czar will go fishing" amid all of this.

Putin gave the interview to the German TV channel a few days before his departure to Australia. The interview was published after the Russian president returned on Sunday. The President noted that the Minsk agreement became possible only because "Russia became actively involved in this effort; we worked with the Donbass militias, that is the fighters from southeast Ukraine, and we convinced them that they should settle for certain agreements. If we had not done that, it would simply not have happened. There are some problems with the implementation of these agreements, it is true," he said.

However, according to Putin, Russia does not have the "special levers" of influence on the leaders of Donbass. It is difficult to find arguments, when loved ones are being killed. "These are our villages, we come from there. Our families and our loved ones live there. If we leave, nationalist battalions will come and kill everyone. We will not leave, you can kill us yourselves," the president said, expressing the views of the militia forces.

"Russia will have to take responsibility for the fate of the Donetsk and Luhansk People's Republics in terms of economic and practical assistance - in questions of  the organization of peaceful life, in terms of advice, counseling and everything that will help these territories go through this difficult period. This winter for them is actually a test for survival," Konstantin Kalachev told Pravda.Ru.

Putin laid responsibility for the situation in Ukraine on the Kiev government. "Today there is fighting in eastern Ukraine. The Ukrainian central authorities have sent the armed forces there and they even use ballistic missiles. Does anybody speak about it? Not a single word. And what does it mean? What does it tell us? This points to the fact, that you want the Ukrainian central authorities to annihilate everyone there, all of their political foes and opponents. Is that what you want? We certainly don't. And we won't let it happen," said the Russian president.

Thus, it is now obvious that Putin will not tolerate the destruction of the People's Republics of Donetsk and Luhansk. This is the main conclusion from Sunday's interview. Russia does not need NATO bases in Ukraine, nor does it need the neo-Nazi Ukraine. "Frankly speaking, we are very concerned about any possible ethnic cleansings and Ukraine ending up as a neo-Nazi state," he said.

Speaking of the influence on "separatists," Putin said: "There is just one thing that I always pay attention to. We are told again and again: pro-Russian separatists must do this and this, you must influence them in this way, you must act in that way. I have always asked them: "What have you done to influence your clients in Kiev? What have you done? Or do you only support Russophobic sentiments?" he said. "However, the following day, despite all the guarantees provided by our partners from the West, a coup happened and both the Presidential Administration and the Government headquarters were occupied," he then continued.

Next came the question of support for the Donetsk and Luhansk republics with servicemen, weapons and equipment. Where did they get the armoured vehicles and the artillery systems? Nowadays people who wage a fight and consider it righteous will always get weapons," said the president.

At the G20 summit in Brisbane, Putin told Canadian Prime Minister that "we will not leave Ukraine because we are not there." Some like to draw parallels with Crimean events, where Putin first denied, but then acknowledged the presence of Russian troops to "block Ukrainian military bases." Well, politics is the art of the possible.

Russia, according to the president, does not fight against Ukraine, but saves its economy. Russian banks, for the time being, have credited Ukrainian economy in the amount of $25 billion, Putin said. Yet, Russia is not going to seek early repayment of the public debt of the 3-billion-dollar loan in payment for natural gas.

"When we extended a $3 billion loan a year ago, there was a condition that if Ukraine's total debt exceeded 60 percent of GDP, we, the Russian Ministry of Finance, would be entitled to demand an early repayment. Again, if we do it, the whole financial system will collapse. We have already decided that we will not do it. We do not want to aggravate the situation. We want Ukraine to get on its feet at last," Putin said.

Why does the West restrict Russian banks in their access to credit resources, Putin asked, because such restrictions harm Ukraine. Gazprombank is another creditor, a private bank. When under sanctions, it may demand early repayment of the amount of 3.2 billion dollars.

"For Putin, it is important Donetsk and Luhansk republics should gain political subjectivity, and this is where respect to the elections that took place there comes from. For Russia, it is important the Ukrainian authorities should see these territories as a partner for negotiations. For war, one party is enough, for peace one needs two. The problem is that not all people in the Donetsk and Luhansk republics want peace. Not all people in Ukraine want peace either. For some, this war is business, for others, war can end only with victory," said Konstantin Kalachev.

"This is the idea that Putin announced back in March, when he offered to confirm and guarantee the neutrality of Ukraine, when he tried to push the Ukrainian leadership towards federalization of the country for the protection of human rights, protection of the Russian-speaking population, the introduction two-language system and so on," Rostislav Ishchenko, President of the Center for Analysis and Forecasting (Kiev) told Pravda.Ru. The plan was rejected then, and, as I understand it, it was finally rejected at the G20 in Brisbane. Putin's early departure suggests that he failed to come to a consensus with the United States. In Ukraine, it is the USA that forms the reaction of the Western world to all proposals in this regard. This means that this idea of shared responsibility should be buried."

"Putin is trying to show that putting pressure on him is useless, - said Konstantin Kalachev. - That is, in this case, we can recall the phrase of Alexander III - "when the Russian czar goes fishing, Europe can wait." Now the two sides will start waiting. In the West, no one is going to die for Ukraine. Now it is very important to start a dialogue between Donbass and Ukraine, and this dialogue will contribute to mitigating the relations between Russia and the West."