Many demonstrators, who took part in the riots near the Verkhovna Rada in Kiev, were bribed. Channel 5 aired the video that showed the moment when the "demonstrators" were receiving 50-hryvnia notes from organizers of the riots. 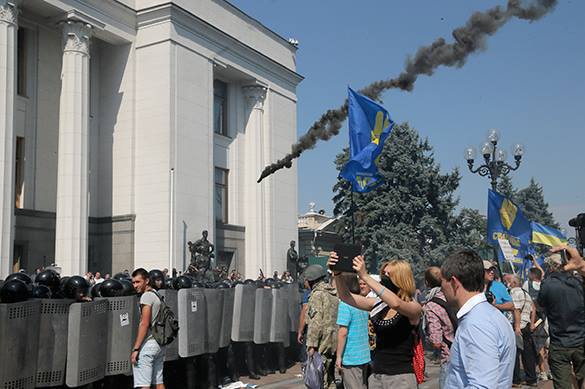 Some of the protesters in the video were wearing white T-shirts, holding the flags of oligarch Igor Kolomoisky's party called Ukrop. A woman in the crowd said that she did not know why she was there for the meeting. Another woman could pronounce the word "decentralization" and admitted that she had come to stand at the rally for 50 hryvnia per hour.

A powerful explosion occurred in front of the building of the Verkhovna Rada of Ukraine. Kiev police chief Alexander Tereshchuk said that about 100 law-enforcers were injured during the riots on August 31, 2015.

Mass protests in front of the Verkhovna Rada of Ukraine began today as the parliament was  discussing amendments to the Constitution regarding the decentralization of power.