In China, Russian President Vladimir Putin had a meeting with his Czech counterpart Milos Zeman. The Czech President is known for his independent stance on both Russia and the Ukrainian crisis. The problem of Western politicians is that they do not express the will of their peoples - Zeman is an exception at this point. The Czech politician proposed creating mobile anti-terrorist group and asked Putin's support in the endeavor. 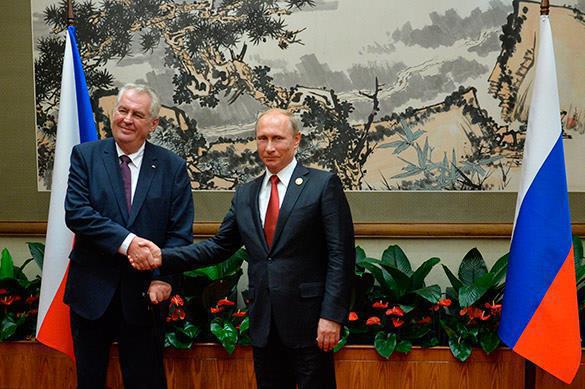 Milos Zeman raised indignation in the West when he came to Moscow for the celebration of the 70th anniversary of Victory of Nazism. He closed the door to the US ambassador for his criticism of the trip to Russia. Zeman also said that the position of Brussels on sanctions and refugees did not make any sense. To crown it all, the Czech president rejects accusations of xenophobia and fascism for his stance against the Islamization of his country.

On September 3, Milos Zeman was the only representative of the West at the victory parade in Beijing. US President Obama pointed out the feat of "soldiers of the allies," but did not mention China in his written statement about the 70th anniversary since the end of World War II.

The position of the West towards China is similar to the Western stance on Moscow. "Most European countries are concerned that China conducted a grand military parade and flexed muscles to intimidate Japan. The problem also lies in infamous Tiananmen Square, where demonstrations against the communist regime were violently suppressed in 1989," Czech TV journalists said.

"I think that my critics are looking for any reason to disagree with my actions, - Milos Zeman said in an interview ParlamentníListy.cz. - However, I am not a puppet of my critics. I defend economic interests of the Czech Republic, and my participation in these events and subsequent meetings with Chinese officials is also a part of these economic interests."

"But you will be standing next to Putin. Does it mean that you will be taking his side in the Ukrainian crisis?" a journalist asked Zeman. "President Vladimir Putin - is the President of the Russian Federation. I do not know, if I am standing on the podium next to him, but if it is so, then I was standing by his side before in Normandy and Angela Merkel was standing near too, and no idiot had any objections," said Milos Zeman.

"We can see two identical pictures - the parade in Moscow and the parade in Beijing, - Vladimir Shapovalov, director of the Institute of Politics, Law and Social Development of the Moscow State Humanitarian University named after Sholokhov, told Pravda.Ru. - In both of these cases, the Western community, with the exception of the Czech President, has ignored  both of these celebrations. This bares a very serious split in the world, including among the countries that won World War II.

"This indicates that the Western community tends to ignore the interests of Russia, China and other countries to monopolize the right for its own interpretation of the results of World War II."

Russia to lift countersanctions against the Czech Republic

Russia appreciates the position of Milos Zeman. Putin gave Zeman to understand that Russia was going to lift counter sanctions against the Czech Republic. "The trade turnover between Russia and the Czech Republic has decreased in recent years, although, I think, this is a temporary phenomenon, and everything will go back to the stage of growth," said Putin.

In a conversation with Putin, Zeman suggested creating international anti-terrorist groups. The groups would be established to eliminate sensitive points of the terrorist organizations, such as terrorist training camps. Zeman asked Putin to support these proposals at a meeting of the UN General Assembly that will take place on September 15-22 in New York.

"Zeman's ideas deserve attention, this is a new approach to the problem of international terrorism, - Vladimir Shapovalov told Pravda.ru. - I think that this idea can and should be discussed."

The suggestion is sensible indeed, but will those, who do not seek unity in the world, agree to discuss it?