Putin: Russia fears nothing as long as Russians stay strong and united

On April 16, 2015, Russian President Vladimir Putin conducted his traditional Q&A televised conference that has become his 13th conference of this format. By noon, Putin had received about 2.5 million questions from Russian citizens. Judging from the questions, most Russians are primarily interested in the issues related to the national economy. The topics of the Ukrainian crisis and Crimea have moved into the background. 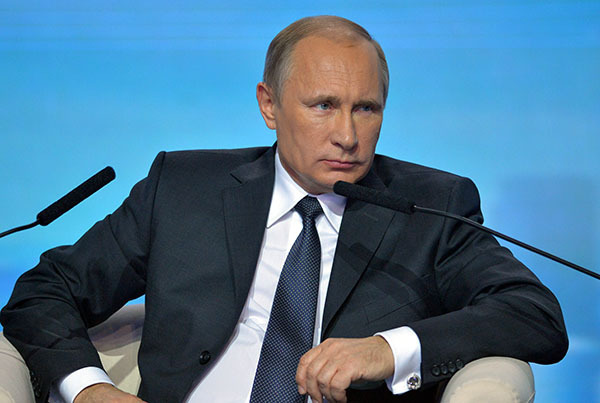 Russian economy to recover in less than two years

Russia, despite the difficult macroeconomic conditions, was able to prevent the inflation rate from spinning, Russian President Vladimir Putin said in the beginning of the conference.

"We have faced with certain external economic restrictions, and it affected the of growth in our development. But in general, what we see is the strengthening ruble and the rising stock market. We have been able to prevent the spiral of inflation from spinning," the president said.

Russia's GDP increased by 0.6% in 2014. "This is insignificant growth, but still this is growth."

Assets of Russian banks reached 77 trillion rubles, having thus exceeded the country's GDP for the first time ever. Putin noted that the banking sector had positive dynamics in 2014 despite "serious fluctuations in the financial market."

Russia is able to overcome any threat, if the society stays consolidated, Putin said. "There are many threats that we can not predict," Putin admitted. "But if we preserve the stable internal political situation - the consolidation of the society that we can see today - then we are not afraid of any threat," President Putin said responding to a question of what new threats Russia could face under the conditions of the ongoing pressure on the country.

As for anti-Russian sanctions, President Putin proposed not to tolerate them, but to take advantage of the sanctions for Russia's further development.

Putin said that during the recent meeting with members of the Bureau of Russian Entrepreneurs and Industrialists the question of sanctions was discussed. "I told them that one can hardly expect the lifting of sanctions, because this question is of purely political nature. For some of our partners, this is a matter of strategic cooperation with Russia - to contain Russia's development," said Putin.

According to President Putin, the Russian economy will recover in less than two years. "I think that maybe it will happen faster - in about two years, as it seems to me," said Putin.

The shipments of S-300 air defense systems do not pose a threat to Israel. They serve as a deterrent factor against the backdrop of hostilities in Yemen, said Russian President Vladimir Putin. "It doesn't threaten Israel at all. They are solely defensive weapons," Putin said.

"Moreover, we believe that against the backdrop of the conditions that develop in the region, especially in connection with the events in Yemen, the supplies of such weapons act as a deterrent," the head of state said, Pravda.Ru reports.

Putin reminded that Russia had canceled the contract for the supply of S-300 air defense systems for an Arab country and reinstated advance payment, having taken Israel's position into consideration.

"Not that long ago, the Israelis expressed concerns about the supply of S-300 systems to another country in the region and drew our attention to the fact that should the delivery takes place, it may lead to fundamental changes, even geopolitical changes in the region, because the S-300 would be able to reach Israel from the territory of that country," Putin said.

"We consulted our buyer, and it should be noted that our partners in one of the countries of the Arab world treated this with understanding. We have canceled the contract and returned prepayment conditions," the Russian president said while speaking, most likely, about Syria.

There is no difference between Russians and Ukrainians

The Russians and the Ukrainian are one people, and there is no difference between them, Russian President Putin said.

"The political situation in this or that country changes from time to time, but people remain. The Ukrainian people are very close to us. I do not make any difference between the Ukrainians and the Russians, I think that it is one people," said Putin.

Speaking about the relations with the current leadership of Ukraine, the Russian president said that he is guided by interests of the state in international affairs, rather than by likes and dislikes. "We do not choose partners. In our work, we should not to be guided by likes or dislikes - we should be guided by interests of the country," said Putin responding to a question about his relations with Ukrainian President Poroshenko, who often changes his position.

"The current leadership of Ukraine makes a lot of mistakes, and results will be negative, but this is the choice of both the president and the government," Putin said.

"There is only one way out - to execute the Minsk agreements, to conduct the constitutional reform, solve social and economic problems of the country and the Donbass in particular," said Putin. "Russia is not going to intervene. This is not our job - to instruct Ukraine onto how to act," he said.

"But we have the right to express our opinion. Moreover, we have the right to draw attention to the need for the execution of Minsk Agreements. We want them to be executed and we expect all our partners, including the leadership of Ukraine, to act accordingly," Putin said.

"After all, it was Mr. Turchynov who first started hostilities in the Donbass, and then Petro Poroshenko was elected. He had a chance to peacefully resolve issues with the people in the Donbass. And we tried to persuade him ... It was conducted in the form of the so-called Norman format. No, they launched combat actions. It ended sadly for the first, for the second and for the third time. It was a tragedy for the Ukrainians, primarily for the Ukrainian Army," Putin said stressing out that it was a  "colossal mistake."

"Today, Russia expects nothing from the Kiev authorities, except for one thing: to treat us as equal partners in all areas of cooperation. An important aspect for us is, of course, to respect legitimate rights and interests of Russians living in Ukraine, and those people who consider themselves Russians," said President Putin.