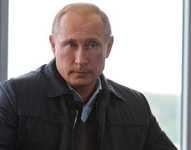 Russian President Vladimir Putin on Friday arrived in the Tver region for the 10th All-Russian Youth Forum "Seliger 2014". During the forum, the head of state answered a number of questions related to the internal structure of the country and its foreign policy, and, as expected, touched upon the issue of the crisis in Ukraine. However, the president did not say anything on yesterday's statement from Ukrainian President Poroshenko about the alleged invasion of Russian troops on the territory of the neighboring country.

Putin said that the current events in Ukraine are a "huge tragedy." Estimating the actions of the Ukrainian military in south-eastern Ukraine, Putin drew a parallel with the tactics of fascist forces in the Soviet Union during Second World War. "Sadly, it reminds me of events of World War II, when Nazi troops surrounded our cities, for example, Leningrad, and shelled those settlements and their inhabitants," Putin said. "You see, what we have come to? This is awful, this is a catastrophe," he said.

According to the president, both small towns, and big cities are surrounded by the Ukrainian army, which directly attacks civilian areas and shells them to destroy infrastructure and suppress the will of resistance.

The Russian president also explained the meaning of the military and humanitarian operations carried out by representatives of the People's Republics of Donetsk and Luhansk. "I can well understand the militia of the south-east, of Donbass, Luhansk.  They attempted - this is why they call this operation a military and humanitarian one - to move Ukrainian artillery and multiple rocket launchers from large cities, so that they do kill people," said Putin.

Commenting on the actions of the Ukrainian command, Putin said that they lead to great human losses. In particular, according to the President, Kiev refuses to use the humanitarian corridor, which at his request, representatives of Novorossiya agreed to provide to allow Ukrainian troops exit encirclement.

"The latest information is as follows: the leadership and command of the Ukrainian army decided not to let them out of the mousetrap, but to attempt to push the militia forces and exit fighting," said Putin. "I think this is a huge mistake that will lead to great human losses," said the president.

The Russian president called on the West to realize that the Ukrainian authorities are unable to restore order in the country. Putin called upon Western leaders to begin negotiations with the south-east of Ukraine. "The position of our partners is clear for me, - Putin said. - Yes, one must sit down at the negotiating table, but still, one needs to let the Ukrainian troops shoot a bit more - maybe they will put things in order there quickly."

According to Putin, "it does not work, one needs to realize that." "One needs to make the Ukrainian authorities start negotiations, not on technical issues, which is extremely important, of course, but substantively - in essence."

One needs to discuss what rights the people of Donbass, Luhansk will have within the framework of modern civilized rules, and all this must be embodied in legal rights. "That's what one must talk about," said the president of Russia.

Putin believes that once such agreements are achieved, it will be relatively easy to address issues related to borders, security and so on. "It is important to agree in substance, but they do not want to agree on substance - that's the problem," complained the Russian president.

Putin said that he agreed with Ukrainian President Poroshenko that the Russian military men, who were arrested on the territory of Ukraine, would be released. The agreement was reached during his personal meeting with Poroshenko in Minsk, he added.

According to Putin, Poroshenko assured him that the servicemen would be delivered to the Russian side.

The President reminded once again, that Ukrainian soldiers had repeatedly crossed the border with Russia as well. "Once, there were 450 people came out, at another time - 60, just recently - another 60, and many were armed. There were incidents, when they would enter our territory and say that they got lost driving their armored vehicles," said the president.

He also expressed his opinion on how the Russian soldiers found themselves on the territory of Ukraine. Putin supported the version of Russian military officials, who said that it was an incidental violation of the state border. "In fact, that's true. I seriously believe that they were lost, because there is no marked border over there," said Putin.

The Russian president expressed bewilderment over the fears of the Ukrainian authorities on the possibility of federalization of the country. He said that in Russia, federalization will continue to develop. "Our Ukrainian partners, for some reason, are so afraid of federalization, it's their choice, but of course, we will never interfere. But there are plenty of federative countries in the world," Putin said.

"The idea is to give peoples living in different areas, the peoples who have their own peculiarities, an opportunity to live their life fully," said the president. He reminded that federal structure exists in countries such as the USA, Brazil, Germany, etc.

The President noted that the institute of federalism in Russia would be strengthened. Putin, in particular, believes that it is possible to relocate a part of federal authorities to Siberia. "Let's suppose, Krasnoyarsk - this is avery good, in my opinion, place for this."

"Krasnoyarsk is the geographical center of our country, a large city with developed infrastructure." There is a good airport there, beautiful nature and wonderful people," he said.

Putin paid attention to large Russian companies. "Why are they all sitting in Moscow? Let them work for territories too, and income for regional and local budgets will grow. They got simply stuck to Moscow. This has been formed traditionally, and it will be hard to squeeze them out from Moscow streets, but we will be working in this direction," the head of state said.

Putin said that after Russia reunited with the Crimea, the geographical center of Russia has "changed a little." However, he does not consider it possible to relocate the capital of Russia from Moscow to Siberia. "In the life and history of every nation,  there are certain symbols that unite people. Moscow is one of these symbols," Putin said.

Speaking about the situation in Russia, Putin could not answer the question of whether the foundation of the political system has been laid in Russia. "God knows," he said with a smile. Speaking seriously, the president said that the answer to this question will be given through the practice of laws and regulations.

At the same time, the president expressed his disagreement with allegations saying that in Russia, there is no real political opposition. In Russia, "there are parliamentary parties, and they behave quite rigidly during election campaigns, when they feel that they have a chance." As an example, the president referred to the election campaign in 2012. "Was it some kind of a game of giveaway? Of course not," said the president. "An unbiased observer could easily see the tough inter-party struggle," Putin said.

"There four well-established parliamentary parties, they have their own point of view on the development of economy, social sphere and the state as a whole," he said.

Russia is far from getting involved in large-scale conflicts, but the country is ready to repel any aggression, Putin said. According to him, the country needs military potential for security, rather than for threats.

According to the President, Russia intends to continue to build up military and nuclear capabilities. This is required for security, not for attacks, he said. "We continue to build up the potential and we will continue doing so, but not to threaten anyone. We will do it to feel safe and be able to implement plans for the development of economy and social sphere," Putin said. "We strengthen our armed forces. They do become more compact and more efficient, they do become more sophisticated in terms of modern defense systems," he said.

Russian President Vladimir Putin said that Russia did not annex the Crimea, but protected it. "We gave people an opportunity to express their position and we treated it with respect," said the president, speaking at Seliger-2014 forum. Otherwise, the Crimea would have been engulfed in the war that currently continues in the southeast of Ukraine, he added.

The youth forum "Seliger" is held annually since 2005 near Seliger Lake, near the town of Ostashkov in the Tver region. In 2014, about 20 thousand people from Russia and more than 140 countries took part in the work of the forum. Putin visits the forum for the fifth time.