Putin speaks his mind on G7, sanctions and Russia's influence

A meeting between Russian President Vladimir Putin and Italian Prime Minister Matteo Renzi took place in Milan today, July 22. The Russian president made a number of  important statements about Russia's foreign politics, sanctions and relations with the EU and the notorious G7. 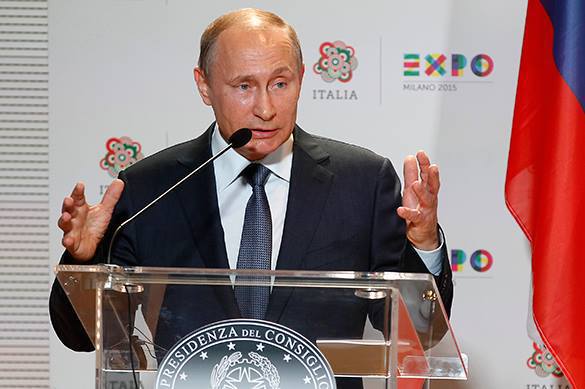 "With regard to our relations with the G7, we do not have any relationship with the Group of Seven. What kind of relations can there be? It seemed to me that there was a point in that, because we at least represented an alternative point of view. Yet, our partners have decided that they do not need this alternative view. This is their decision. But this is not an organization, but just a club based on interests. We wish success to this format," Vladimir Putin answered to the question about the prospects of Russia's participation in the G7.

Having visited the opening of the national day of Russia at EXPO-2015 with Italian PM Renzi, Vladimir Putin touched upon agricultural problems and spoke about the importance of food security on a global scale.

"Russia, which accounts for a tenth of all arable land in the world and one-fifth of fresh water reserves on the planet, contributes to world food security in every possible way. In 2014, we collected one of the largest grain harvest - more than 105 million tons," said Putin. The harvest increased Russia's potential of grain exports to 30 million tons, Putin said. Today, Russia is the world's third largest grain exporter, the Russian president said.

Discussing the Ukrainian crisis, Putin said that this issue was also raised in the talks with the Italian prime minister.

"I'd like to stress this out that the document that was coordinated in the Belarusian capital contains all key aspects of the settlement: political, military, socio-economic and humanitarian ones. Unfortunately, they are being implemented selectively, rather than fully," Putin said speaking about the Minsk Accordы.

Putin also said that there was no alternative to "Minsk-2," despite active intervention of Western countries.

"It is significant that both sides proceed from the fact that there is no alternative to a peaceful settlement there. Russia, like Italy, I want to emphasize that, stands in favor of full implementation of the Minsk Accords," Putin concluded.

Russian President Putin spoke about Western intervention in the context of growing tensions in Libya.

"Obviously, the events that have been happening in Libya are a direct consequence of the socio-economic disaster and ongoing attacks of radical groups. We are convinced that the collapse of the Libyan state that takes place before our very eyes is the result of external military intervention in 2011," Russian President Putin said.

As for the sanctions, Putin is certain that sooner or later the parties will refuse from sanctions and mutual restrictions.

"In general, it causes damage to our cooperation, of course. I hope that sooner or later we will move away from the restrictions that we are facing today," Putin said at a press conference.

Vladimir Putin stressed out that Russia would always find partners, even under the conditions of sanctions.

"Many Italian companies were competing for contracts, won tenders and were highly interested in their implementation. Yet, the contracts were suspended because of the sanctions against some of our financial institutions. Therefore, one should look for a way out," Putin said.

"We will find partners, of course, but it seems to me that one should not give up on mutually beneficial contracts, tools and ties," the President of Russia said.

Noteworthy, the EU has extended sanctions against Russia for six months - before January 31, 2016. Russia was ready for such a development.

Pravda.Ru asked an expert opinion on the subject of sanctions from Vice President of Business Russia, Nikolay Ostarkov.

"I do not think that the sanctions war may end soon. I can say for sure that this war is destroying mutually beneficial contacts in many fields. For the time being, we have not resorted to any strong arguments in the sanctions war. The financial sector is the most sensitive one for us, and if sanctions continue, then we will experience serious difficulties in the future. But the EU is experiencing difficulties with exports of its products and foodstuffs," Mr. Ostarkov told Pravda.Ru.

"We have very serious relations with Germany, but the financial sector is important to us as well. It goes about French, Dutch and Austrian banks. When Russian banks can not take loans on European rates, when large Russian companies can not receive loans, then it causes serious difficulties. The United States wants to establish most favorable trade relations with Europe, to reduce tariff rates to zero. That is one of the main goals of the States," Nikolai Ostarkov told Pravda.Ru