The tombstone of Barack Obama's presidency

The Americans, who voted for their first black President Barack Obama eight years ago, were following their illusions throughout eight years of his presidency. It appears that those people reelected Obama to delay the moment of self-insight for a few more years. 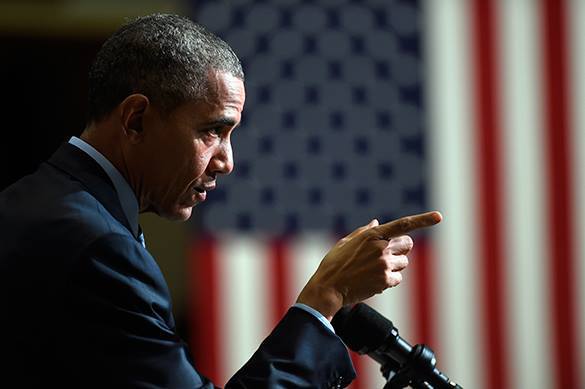 Obama messed up both his 2009 and 2013 Oath of Office. Was it a sign? His infamous healthcare reform led to lower quality of medical services in the United States and discriminated against many of those who were in need of medical assistance. Obamacare raised healthcare spending for both the state and common citizens and swept several major medical insurance companies away from the domestic market. Of course, the Republican Party did not stand aside and took maximum advantage of Obama's blunder. The Republicans sabotaged the adoption of the annual budget and initiated legal proceedings to recognize several provisions of the reform illegal.

The Obama administration tried to cover its notable failures in domestic policy with global and local victories on the world stage. Having announced the "reset" of relations with Russia (although the symbolic button that Secretary of State Hillary Clinton presented to Russian Foreign Minister Lavrov in 2009 actually said "overcharged") and having signed the START-3 treaty, Obama was hastily named the winner of the Nobel Peace Prize. Yet, the strange event could not fog the mind of any sane person, even in the United States. Politicians and the military, both in Russia and in the United States, critically evaluated the START-3 treaty. For example, Vladimir Zhirinovsky stated that the treaty significantly weakened Russia's military potential, while the Republicans immediately dubbed the document as Obama's "worst foreign policy mistake."

The withdrawal of US troops from the ravaged and ruined Iraq, which was initiated by the Obama administration, led to disastrous results. Iraq was thrown into the abyss of endless and brutal civil wars. The Americans have made Iraq a global terrorist enclave. The elimination of Osama bin Laden and the alleged destruction of his terrorist organization Al Qaeda have not made the world a better place either. Terrorism infiltrated all of the Middle East and split into several large organizations and a plentitude of smaller groups.

The US-led policy of "color revolutions" in North Africa has led to the destruction of the erstwhile flourishing country - Libya. In the course of unrest in North Africa and in the Middle East, the US first cynically betrayed the US-loyal government of Hosni Mubarak in Egypt, then changed the regime in Tunisia and Yemen. A a result, a multitude of extremist and fundamentalist terrorist groups have appeared in those countries. The United States has failed to achieve its prime goal to establish control over enormous energy resources of the above-mentioned countries. Obama himself was forced to admit the policy of the "Arab Spring" a failure, and the invasion of Libya - "the worst mistake" in the years of his presidency.

The US policy in Afghanistan that still lives under the American occupation is no less serious a mistake. Taliban groups are still strong, drug trafficking from Afghanistan has grown exponentially,  the puppet Afghan government is weak, hundreds of civilians and soldiers still die in various attacks and hostilities. US operations and missions in Afghanistan, even though they bear  pretentious titles, such as "Enduring Freedom" and "Decisive Support," fully reflect the essence of US foreign policy. They are nothing but loud empty slogans about freedom and other "true values," that actually cover common cynicism, exorbitant greed, arrogance and superficiality that often borders on outright stupidity and pathological stubbornness. Against the background of all that, Obama allowed himself to make shameless statements about the exceptional right of the United States as the only global dominant power to twist other countries' arms if the latter do not do what the USA wants them to do.

Another notable failure of Obama's reign is associated with multiple leaks of classified information constituting a state secret. Suffice it to recall the Snowden case or Hillary Clinton's email scandal. Obama also launched an attack on traditional family values of many American people by propagating homosexual culture and legalizing gay marriage. The actions of American military and government officials in Syria, the European refugee crisis, attempts to revive US imperial policy in relation to a number of key countries in Latin America and the Caribbean, Obama's visit to Japan and to Cuba, the signing of the peace deal with Iran - all of that appeared to be either useless or premature and dangerous.

As a result of Obama's inept decisions, many American citizens started to gradually lose their moral guidance, points of support and even elementary common sense. Well-known American author and columnist David Wong, reflecting on frightening changes in the minds of many Americans and the stratification of the American society during Obama's presidency wrote: "Terror victims scream in the street next to their own severed limbs, and the response from the elites is to cry about how men should be allowed to use women's restrooms and how it's cruel to keep chickens in cages."

The main negative achievement of the outgoing American administration and personally President  Obama is, of course, the creation of the anti-Russian doctrine. The paramount "achievement" of this act was the so-called Ukrainian crisis that had been staged on the basis of the Libyan scenario. The legitimate power was overthrown, the population was impoverished, and the country continues to live in chaos and civil war. The USA has used and humiliated yet another country, this time to contain Russia's economic progress and international influence.

In Europe, the USA initiated a competition for the title of the country that was offended by Russia or the USSR most. Poland, the Baltic States and Ukraine take the lead in this competition.

Before going down in history, the Obama administration desperately tries to weaken the Republican Party and its main representative - Donald Trump. At the same time, the failures and blunders of the Obama administration have made the Republican Party a lot stronger than it was eight years ago. In 2010, the Republicans celebrated a landslide victory over the Democrats at elections to the House of Representatives. In 2014, they won a majority in the Senate. Now, the "Donkeys" desperately want to cause as much harm to the "Elephants" as possible by leaving them with a pile of legislative crap.