Obama presidency: Only Bush is worse

Fewer Americans believe that President Barack Obama is respected by his counterparts. The opinions of the Americans have changed dramatically in the past year, Gallup study published on February 24 said. A year ago, 53 percent of respondents thought that Obama was a respected leader in the world. Today this is the opinion of 43 percent. 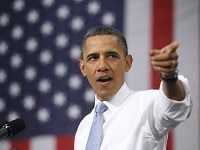 The authors of the survey emphasized that a sharp change in the views of the Americans was explained by specific international events, such as the revelations of Edward Snowden about total wiretapping of foreign leaders, lost position in Syria, increased tensions with Russia and the tense relations between Obama and Israeli Prime Minister Benjamin Netanyahu. The latter sharply criticized the White House for the agreement on Iran's nuclear program and called it a "historic mistake."

Only President George W. Bush had lower rating in 2007 (27 percent), and President Bill Clinton in 1994 and 2000. President Barack Obama now faces a number of challenges that may lower his approval rating in the event of failure. This is the situation in Afghanistan, the continuation of the civil war in Syria and relations with North Korea, Gallup reported.

The survey was conducted by telephone on February 6-9, 2014, with a random sample of 1,023 adults aged 18 years and older residing in all 50 U.S. states and the District of Columbia. The statistical error is ± 4 percentage points at a confidence level of 95 percent.

According to another poll conducted by Reuters/Ipsos published in late January, 53 percent of the Americans do not approve of Obama, and only 38 percent evaluated Obama positively. A year ago the numbers were the  opposite. Other polls show the same negative trend. Institute Quinnipiac (ratio - 54 - 40 percent), the Associated Press / institute GfK (ratio - 53 - 45 percent); NBC News / Wall Street Journal (ratio - 51-43 percent).

Gallup Institute during the past year and in early 2014 conducted a number of surveys that show Obama's positions particularly criticized by the Americans.

1. Immigration. 54 percent of the Americans are unhappy with his policies in this area. Only 38 percent of the responders approve Obama's policy on immigration. Most of those dissatisfied prefer for immigration levels to go down. The Americans approve of various proposals on the prevention of illegal immigration, including the tightening of security on the U.S. border, the adoption of measures for businessmen requesting them to check the immigration status of hired employees, expanding the range of work visas for skilled workers and legalization of illegal immigrants by giving them access to citizenship.

3. Investment in infrastructure. Gallup survey conducted ​​in March of last year showed that 77 percent of respondents wanted Obama to pay more attention to the problems of unemployment through a federal government program for urgent infrastructure projects. People are not satisfied with Obama spending public funds that, in their opinion, should be invested in repairing aging roads, railways, and airports.

4. Affordable Health Care Act (Obamacare). Public opinion is generally more negative than positive with respect to this law fostered by Obama. One in four Americans without health insurance (which is the main target audience of the reform) is not going to buy it and is willing to pay the penalty required by law, said the Institute in November. Moreover, young Americans (Obama's electoral base) are less aware of the reform. Many Americans say that Obamacare will be more negative than positive for them and will have a negative impact on the country in the future.

Many Americans are not too poor to qualify for assistance, but do not have the appropriate level of income allowing to buy insurance on their own, or (for some categories of citizens, for example, students) to receive an insurance subsidy. Currently expansion of Medicaid is suspended in 24 states from 50.

5. Policies for creating jobs in the United States. Gallup poll twice in the last five years found extreme dissatisfaction of the Americans with the fact that jobs were leaving the U.S.

6. Surveillance program on citizens by the secret services. 63 percent of respondents told Gallup that total surveillance caused them extreme concern and potentially blamed it on the president, who nevertheless maintained that he was not aware of the scope of the surveillance activity. Secret services are armed with new technologies, including mobile devices allowing to extract information from mobile phones in real time, gather data about thousands of mobile subscribers at the same time, regardless of whether they are objects of a certain investigation or not," USA Today described the situation in the country.

7. Measures for prevention of armed violence. Gallup says that after the tragedy at Sandy Hook elementary school in December of 2012 that resulted in the death of 20 children, public support for the passage of more stringent laws on the sale and possession of weapons was formed. The number of those approving these measures has increased to 80 percent. In addition, there is dissatisfaction among the Americans that gun laws do not work. But Obama is skeptical of armed guards in schools in the U.S. and did not go further than statements on new legislative measures. The Americans frantically purchase arms after each such statement.

Some of Obama's colleagues from the Democratic Party scared of the low ratings of the President began their election campaigns in Senate, distancing themselves from the White House and asserting their independence from Obama's policies.

This position may cause the Democrats to lose control of the Senate (they do not the majority in Congress). The advantage of Democrats over Republicans comes down to six states, and the latter have all chances to win Senators' election on November 4 in Alaska, Arkansas, Louisiana, Montana, North Carolina, South Dakota, and West Virginia.