LOL: Egocentric Obama wants to stay 'on the job'

Nothing in the title is funny in the ordinary sense. Derision is a better reaction. Americans should be appalled. This is the current state of affairs for their 'leader' in the White House. The Emperor is in dire need of a makeover; he should buy new clothes; don apparel that reveals real substance; even a modicum of measure would suffice. Yet Obama wants to prolong his façade. How long? Forever if the MSM and the one per center elites have their way. Judging by their combined professions of adulation each day, they aim to keep him. 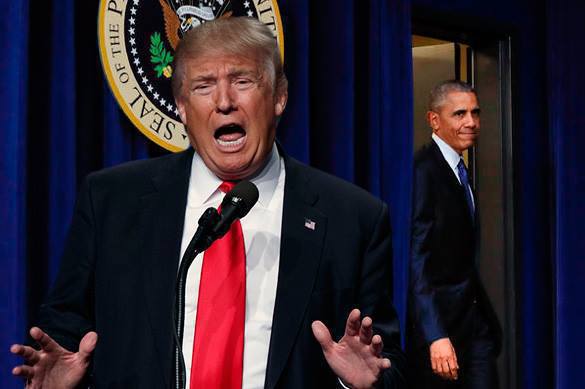 The latest chapter in this never ending story of the establishment's love for this mystery man who became the U.S. president began in an innocuous setting. While he was interviewed for a sports program, the host asked, perhaps suggested that Obama could pursue his passion to play golf even more; likely true now that he was leaving public office. The host's probing question hit a nerve. Obama bristled. He then took umbrage. How dare someone broach such a sensitive topic!

Like he always does when the media's questions do not fit is agenda, Obama chose to deflect. He switched to offense. For an hour Obama waxed on profusely; it was all about him. His schmooze talk revolved solely about his personal dogma: he was not ready to retire; he still had much work to do; America needed him; the whole world still worshipped him; his 'coalition' of partner states could not function without him. Brag much, Mr. President!

As incredulous as it seems Obama's tawdry tack still resonated. The camera panned on the host. The middle aged male was caught swooning during the discourse; many times he nodded his approval. Unbidden, the interviewer even helped his guest; whenever Obama fumbled his lines, which was often, the sports guy filled the breach. Americans are excused for their skepticism or forgiven if they had viewed with a jaundiced eye Obama's rosy self portrait. Back home, their reality is far different.

Obama's list of 'accomplishments' has fallen abysmally short of the people's expectations. For example: The Affordable Care Act has been anything but affordable. Premiums have soared. Medical costs continue to skyrocket. Obamacare is a boondoggle; only the programmers and the lobbyists reaped any boon.

The middle class has shrunk

How about the economy? The middle class has shrunk. Workers' benefits are decimating. Because of off-shoring, good paying jobs are hard to find. Real wages have stagnated across the nation. The stock market has ballooned to unsustainable levels; the hyper inflated DJI average is not supported by corporate earnings growth. When the securities market bubble bursts, and it will, as many analysts predict, the fallout will be much more pervasive then the 2008 crash; a major reason why The Fed is in seclusion.

Obama's foreign policy record is not any worse than Dubya's; but it is still a disaster. The Middle East is in flames. The NATO invasion and subsequent destruction of sovereign Libya happened on his watch. Colonel Gaddaffi was murdered in cold blood because of Obama's 'leadership' from behind. Then there is Syria. U.S. vassal NATO is at war again; they are up to their old tricks of committing atrocities and mayhem; then blaming Assad's regime (or Russia).

Who can forget the ongoing Ukraine crisis? Obama's State Department was the instigator. When Russia brokered a plan for a peaceful transition after democratic elections, the U.S. responded by backing a murderous coup in the capitol. Now the Kiev junta bombards at will, the innocent ethnic Russians in Donbass. When called on the UN carpet, the Obama administration, out of sanctimonious hubris resorts to vilifying President Putin for the conflict's impasse.

Obama wants to stay on the job

Obama wants to stay on the job? In his short time remaining he should try working: lay off golf; give the taxpayers a break; take fewer vacations; roll up his sleeves; put in an honest day at the Oval Office. Just do something; try anything different that leads to a positive result. Give the people a sign that he understands. Lift the sanctions. Stop the assault on Russia and China too.

Being President encompasses much more than merely 'looking' the part. Contrary to what Obama believes and far removed from 'the leader of the free world' image that the MSM portrays, his 'legacy' is already in jeopardy. In his eight years as U.S. Commander-in-Chief, Obama has never progressed beyond that of playing the role of Presidential spokesperson; that was his sole accomplishment and legacy. Nothing to brag about.