What Obama brings to world

President Barack Obama will leave his post in four months, which legacy does he leave? It's the first US president who suffers from megalomania, and who is absolutely incompetent in everything. Many believe in the US that he has deliberately destroyed the country and damaged its image in the world. Is it so? 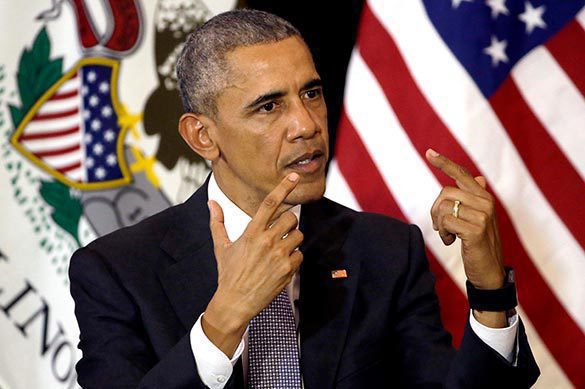 Today the 'world is more prosperous, less violent, although it's more unpredictable,' the US President Barack Obama said during his last speech at the UN Assembly. This only statement proves previous thesis on 'the great and powerful magician' Obama.

Self-portrait of the US President, if listening to his speech, seems like this: 'I've saved the world economy from another Great Depression, made America more safe and influential, ended two wars (withdrew troops from Iraq and Afghanistan), I moved from 'hooliganism' (as they call oversea military operations) to sanctions and diplomatic pressure. I tracked and killed Osama bin Laden, reconciled with Cuba and prevented Iran from getting a nuclear bomb. I reined back Israel, which doesn't define policy in the Middle East any more and established independent relations with the Persian monarchies, having liberated from the influence of the Saudi oil due to shale. I ended up with infantile treatment of Europe, supported young Ukrainian democracy and warned aggressive Putin along with Chinese monsters that I won't let them offence civilized liberal world. And at last, I established relations with the Muslim world and didn't allow to repeat a new 9/11'.

And now we'll paint Obama's portrait. Onlookers see more than players. Obama is the first US president who has not secured GDP growth worth 3% any time for 8 years. In case it makes up a little bit more than 1.5%, it'll be well. Real unemployment has increased and reached 13.6%. Taxes' rise haven't led to balanced budgets, zero interest rate of the Federal Reserve have led to growth of debt burden, the government debt has increased from 7 to 19 trillion dollars. Its maintenance nullifies GDP's growth.

Real profits of the middle class haven't increased, it's also for the first time in modern history after the WWII. It nullified belief in the American dream - main US ideology. Racial contradictions have escalated under Obama, which undermined belief in the American melting pot - one of the pillars of the US statehood. Special culture - culture of deception of its own people - has been formed under Obama.

Obama started bombing other countries having hardly come into power, these are Syria, Libya, Somali, Pakistan, Yemen, Afghanistan, Iraq, not asking for the Congress' approval. But the strategy has worked out. Unpredictable marginal regimes which live according to Shariah law displaced dictator and secular ones.

Reconciliation with Cuba is also an advertising step. He has brought nothing to Cuba, sanctions are still in force, the Congress isn't going to lift economic blockade.

Treaty with Iran allowed Teheran to come out of international sanctions and unite with Moscow in Syria. Beside that, Iran has a lot of loopholes in the issue of nuclear bomb production.

What about Russia, Obama provided the world with a new round of Cold War, opposing Moscow, which threatens to shift to direct clashes between Russia and the US in Syria.

Support of unconstitutional power in Ukraine has led to destabilization of European borders and increase of the 'Russian world'. Europe on the contrary has weakened, its unity is being undermined by anti-Russian sanctions and migrant crisis - it's a direct legacy of Obama's destroying legitimate governments in the Middle East and in the North of Africa.

Under Obama ugly American democratization with its selfish interests was revealed by Snowden and Assange. And the main is that Obama grew the Islamic State and other jihadists of a new wave, because everywhere 'something went wrong'.

Amazingly, how ineptly the US diplomacy and special services under Obama calculated its steps.

Let's take consequences of the Arab Spring at least. The shepherd probably defines its flock. And meanwhile the IS takes responsibility for terror acts in the US (Orlando, Minnesota). Homegrown terrorism is growing.

For the left 4 months Obama will neither liquidate prison in Guantanamo as he promised, nor sign trade investment agreements with Asia (the Congress is against), and Europe (Europe is against), as he promised. He won't make North Korea become less aggressive, and China - cede its initiative in the South China Sea.

Obama will make nothing to have Assad dethroned and the Minsk agreements implemented. The case is that America has never had such an untalented and not ready for compromises president, who even didn't manage to gather an efficient team.

But if Hillary comes to power, Obama will seem to be an excellent president - a kindhearted man.