Obama pleas for forgiveness in Cuba

Havana has acknowledged that US President Barack Obama has taken positive steps to change some aspects of the US embargo against Cuba. In December, Obama said that it made no sense to go to Cuba, unless there is significant progress in the field of human rights in the country. The United States has not seen any positive developments in this field, but still, Obama went to the  Island of Freedom. Why? 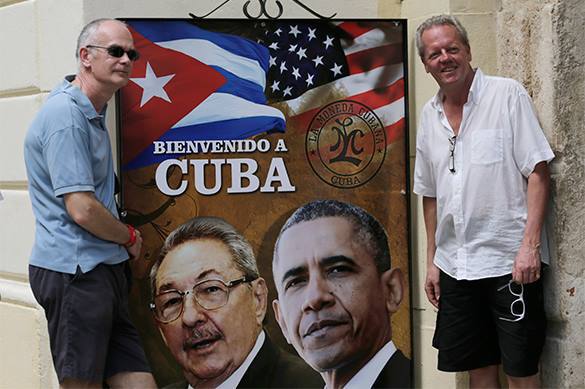 It was Cuban Foreign Minister Bruno Rodriguez, but not the head of state Raul Castro, who welcomed Obama at the airport of Havana. The Cuban leadership is more than just cautious to the visit of the American president. Improvements in the US-Cuban relationships have been purely decorative for the time being. Obama's initiatives were related to mitigating the trade and visa regime, as well as certain types of money remittances.

In general, many restrictive regulations, as well as the frightening effects of the embargo have been kept in force. The UN evaluates the damage caused by the blockade at $1.2 trillion. Vessels transporting goods from or to Cuba are barred from entering US ports, regardless of which country those vessels may belong to.

History will not forgive Obama's visit to Cuba

Major Western publications immediately declared Obama's visit to Cuba as a "historic" event that will help the island nation develop democracy. Obama proudly declared that his visit was the first visit of a US president to Cuba in  88 years. Of course, Obama did not say a word about how the US used Cuba as a casino and brothel for 38 years before the States isolated Cuba as part of the "axis of evil" for the following 50 years. Clearly, American democracy is the last thing that Cuba wants.

There are other views. Gregory Korte suggests on pages of the USA Today that Obama's visit to Cuba was a test for Obama's new foreign policy doctrine that rejects color revolutions to reeducate disloyal regimes "peacefully," even with the help of baseball.

The purpose is clear: to create cultural, economic and political ties between the two countries to restore Washington's influence on Cuba, educate the consumer society, inundate it with US products and make the Cuban society worship the United States. The problem is that there are other players in Cuba now - China and Russia.

Today, the average salary of Cuban citizens makes up around $20 (500 pesos). Only so-called "self-employed" and bisneros ("shuttle traders") can make more money. In Cuba, one can already buy cell phones, even though the Internet is quite pricy. Apartments and cars are also available. One can also receive land from the state for agricultural activities. One may even travel abroad, if you have money for a ticket and a visa.

Telecommunications companies, taxi drivers, mechanics, repairmen, photographers, car washers  and so on work in the private sector of business. Cuba is switching from socialism to capitalism, but it depends on China which way Cuba will go - national or liberal.

China is already in Cuba and is not going anywhere

China has been very active in Cuba lately. In December, direct flights between Beijing and Havana were launched. The trade turnover between the two countries has increased by 57 percent. China has been building Internet infrastructure in Cuba, even though US-based Internet giants, such as Google and others, are not allowed to enter the Cuban market, The Wall Street Journal said. This is partly due to the corruption of American providers that wiretap phone calls and watch every step their clients take.

China is Cuba's second largest trading partner after Venezuela. Joint ventures and foreign direct investments from China are relatively small, but are expected to grow in the coming years.

Cuba, like China, is going to build a market economy without changing the nation's ideology. This is a triumph of socialism, the Granma newspaper wrote about Obama's visit. The newspaper notes that Cuban medicine and education are ranked best in Latin America. Suffice it to say that those Americans who do not have insurance come to Cuba to receive medial treatment there for little money.

For Cubans, Obama's visit to their country is a plea for forgiveness for the actions of the previous ten presidents. The Cubans are waiting for real, rather than demonstrative steps from the United States. "If the US government wants to bring good to the Cuban people, let them lift the blockade," Cuban Foreign Minister Bruno Rodriguez said.

Yet, it is only Republican-dominated Congress that can lift the blockade. Most likely, the next US president will be a Republican too. Therefore, the US may soon turn its back to Cuba again.

"Raul Castro is a very pragmatic politician, who supports the restoration of relations with the United States. He understands that the world has changed," Andrei Manoilo, Doctor of Political Sciences, Professor of the Moscow State University told Pravda.Ru.

"For Obama, this is a chance not to go down in history as yet another "lame duck" and absolute loser. In Cuba, the US may take advantage of Russia to revenge for Syria and Ukraine. The US has been trying to bring Cuba back to the sphere of its influence, intercepting the initiative from China. Perhaps, the Americans are trying to proactively anticipate the second coming of Russia to Cuba," the expert said.