The closing act of the boxing film, 'Requiem for a Heavyweight', is classic cinematic pathos. In it, Anthony Quinn's protagonist character, Louis 'Mountain' Rivera, laments. "I coulda been a contender...." As the curtain falls, audiences have pity; shadow boxing is all that he has left. The camera pans closer. 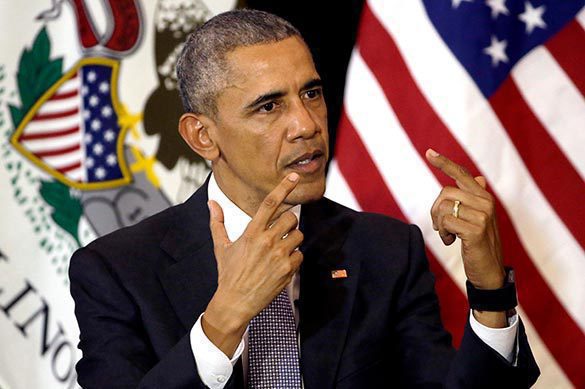 The closing act of the boxing film, 'Requiem for a Heavyweight', is classic cinematic pathos. In it, Anthony Quinn's protagonist character, Louis 'Mountain' Rivera, laments. "I coulda been a contender...." As the curtain falls, audiences have pity; shadow boxing is all that he has left. The camera pans closer. Rivera's face is drawn. Lines cover it; forlornness is etched ever deeper. Only despondency remains; it dominates the scene. Dreams were shattered. The underdog fell short; his former greatness is past.

To a large degree, Quinn's character is a fitting caricature of sitting U.S. President, Barack Obama. Eight years ago, the Illinois Democrat Senator was the rank outsider. Despite his mixed genetics, Obama's popularity rose across both the racial and political spectrums. His challenge for the nation's top office gained credibility. Right from the outset, he smote the media. Obama became their darling; the budding love affair grew not only in America, but also around the world. People from the globe's far corners caught 'Obama fever'; they bought the hype; they wanted to believe in Obama's 'cause'. In America's case, the voters were fooled twice. Obama was reelected; with ease.

Incredulous as it was, Americans gave him his second chance. They proffered their reasons: he was a Nobel Peace Laureate, the Affordable Care Act was soon to be codified despite the system's rising costs and affordability issues, and he 'got' Usama bin Laden, America's arch nemesis since 911. However, a prudent, thinking president would have ordered the al Qaeda chief's capture. Bin Laden's 'intel' value far exceeded killing him; any perceived benefits from the latter remains to be seen; but Obama opted for the photo-op. He took the easy route.

Overseas, a much different picture and a radically changed Obama emerged. He ratcheted up the war option. Instead of ending America's participation in the Middle East and Afghanistan juggernaut, as he promised in his earlier election platform, Obama sought new enemies. He found one. Oil rich Libya's President Muammar Gaddafi was a convenient scapegoat. Using vassal stooge surrogate NATO, the 'presidential looking' Obama unleashed terror on the peaceful Libyan people. Gaddafi was first deposed; then summarily murdered; all this mayhem happened on the Nobel Peace Laureate Obama's watch.

He was not finished. Obama's shenanigans continued. Next up: date-line Syria. Democratically elected President Bashar al Assad was deemed not only America's, but also the entire civilized world's existential threat. Obama said so; therefore it must be true. At that juncture, Obama encountered stiff resistance. He met his match in Vladimir Putin. Putin opposed him on his Syria demands. Obama was forced to walk those back. Russia's President is resolute; a man of action; he is fine chess player; he maneuvers well in foreign circles. His timely intervention in Syria on Assad's behalf changed the tide; the Middle East's influence balance tilted toward Russia. Moreover, the Syrian Army is soundly defeating the ISIS terrorists and the 'moderate' rebels.

Assad stays. He is safe. Syrian citizens rejoiced on hearing news of the loyalist successes in terrorist besieged Aleppo.

Things did not augur well for Obama

Worldwide, news of the deepening Syrian crisis had far-reaching effects. Much of it did not augur well for Obama. In Norway, the Nobel Committee was moved; they had remorse. Their dour mood spurred action. Members introduced a motion to disavow or even rescind Obama's Peace Prize. They, like so many global supporters could not believe their eyes and ears. Obama's record proved that he was anything but a pacifist; his dovish stand all but vanished. His peace loving talks of the past were just that: talk.

What a colossal disappointment! If you factor in his not honoring his, promise to shut the Guantanamo prison camp In Cuba, Barack Obama's deeds screamed hypocrite! Obama's duplicitous mind also wrought mischief in Europe. He imposed illegal sanctions on Russia for rescuing their Ukrainian kin in Crimea. Meanwhile, the Kiev coup criminals remain at large. With all of the 'building up', he enjoyed in The Press, Barack Obama would not contain his braggadocio. Despite his overseas failures, Obama still thinks he is 'kool'.

History will be unkind; it will remember him as a lightweight; a novice who sat on his stool for eight rounds; he failed to venture inside the ropes, even once. Obama was never in contention. When 'greatness' in the form of seeking world peace beckoned, including that with Russia, Obama had cold feet. He lacked courage; he let the chicken hawk State Department dictate policy. His 'Presidency' is a real example of the tail wagging the dog; not a flattering portrait to grace his legacy museum.