What were the real reasons of John Kerry's visit to Russia? What global goals does Washington set for itself? How does Europe react to the crisis in the Turkish-Russian relations? We discussed these and many other subjects in an interview with Bulgarian publicist, Pamen Paskov. 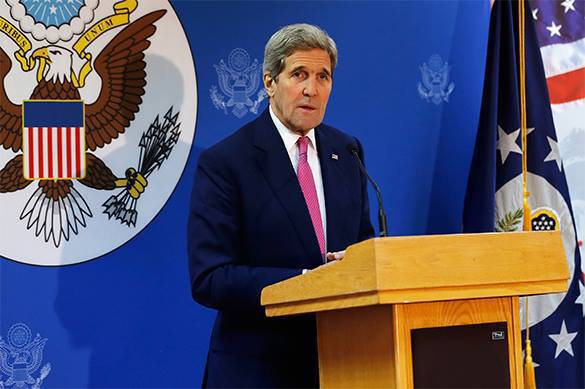 "Some scientists of politics say that John Kerry brought a new plan for the new world order to Putin. Others say that the world is collapsing. What do you think was the real reason for John Kerry's visit to Moscow?"

"One should look beyond politics here. One should try to understand the real reasons and motives behind diplomatic statements. Even when politicians smile, their faces do not reflect reality.

"US Secretary of State John Kerry is a serious man. He is a representative of the ruling clans of the United States. John Kerry came to Russia with Victoria Nuland. In the US delegation, there was also US ambassador to Russia John Tefft. They wanted to put something like an ultimatum to Vladimir Putin. If an official of Kerry's level arrives, he should have clear objectives. The objective is clear. The United States needs to remove Putin from power. Another objective is to take complete control of Syria by getting rid of Bishar al-Assad.

"I think that the American mission consists of three parts. The first one of them is to obtain Putin's agreement for Assad's resignation and capitulation of Syria. The United States is standing behind a huge coalition that was created to struggle against the Islamic State. However, in only two months of Russia's special operations in Syria, they could see the immense military power of the Russian Federation. Of course, the United States was greatly surprised in the beginning. Afterwards, they created a huge, 100,000-strong army under the guise of anti-terrorist coalition.

"John Kerry's second goal was to receive Putin's agreement for the execution of the Minsk Accord. In reality, the United States wants Russia to leave the Donbas for good. In accordance with the Minsk Accord, the Dobnass was to return to Ukraine before the end of 2015 under certain conditions which neither side has been able to observe."

"Are these your personal assumptions?"

"Yes, they are just my theory. Kerry's goal number three is to make Putin capitulate. What does John Kerry have? He has a loop that he's tightening on Russia's neck. Nato's military contingent in the Baltic States and in Poland has been increased 13 times. Military actions in the Donbass are about to resume. There is every reason to believe that the war in the South East of Ukraine is going to start very soon. Terrorist activities in Russia's Caucasus are in the making as well. Last week, 13 people were killed. Dagestan is still a hotspot. Let's just hope that Chechen President Ramzan Kadyrov will be able to keep the situation under control.

"Another front is opening in Central Asia. This is a very serious development, because in northern Afghanistan, for example, the Islamic State has recently taken two towns. This cancer continues spreading. The Islamic State is already in China. Just look at the map: the Baltic States, Ukraine, Donbas, the Caucasus, Central Asia, China - this is a plan to encircle Russia.

"As for Turkey, this country is in a habit of showing influence on political processes in other countries. Turkey took part in two Chechen wars. Militants would receive medical assistance,  education and training in Turkey. Turkey was playing against Russia and continues playing so today.

"I think that John Kerry arrived in Moscow with tough requirements in his pocket. The Americans have been showing greater influence on the countries that Russia considered its allies before. Russia has lost Argentina, because Cristina Kirchner is no longer the president. The new Argentine president swore an oath to the United States. Everything is now happening on the American scenario. Colour revolutions are brewing in Latin America. Now they're trying to impeach Brazilian President Dilma Rousseff. She cannot help and assist Russia because she has to deal with serious problems in her own country.

"In Venezuela, the ruling party has lost the elections as well. The same is happening in Cuba. Everyone is eagerly waiting for Castro brothers to die. There is every reason to believe that Cuba will become a colony of the United States soon.

"Look at the Balkans. Serbia, Russia's long-standing friend, was lost a few months ago. The country seeks NATO and EU membership. The Serbian administration has been completely Americanized. Montenegro is joining NATO. There were protests in Bulgaria in Serbia and in other countries, but no one is paying attention to them. No matter what people may say, politicians follow instructions from Washington. As a result, we only have China left from BRICS countries.

"Kerry can remind Putin that owing to the actions of the Central Bank, the Russian ruble has collapsed. This collapse of the Russian national currency has nothing in common with the declining world oil prices. The West has been striking economic, financial and social blows on Russia.

"I think that the current situation is very serious. Russian Defense Minister has recently reported that the Russian nuclear weapons were set on full alert. I very much hope that President Putin has his own trump cards that he can use when time comes. We have to have something against American trump cards."

"What do you think about provocations from Turkey? Why did the country decide to start serious confrontation with Russia? What does Turkey want?

"I said back in September that the Turkish Stream project was not going to materialize. I understand that every country has its list of geopolitical interests, and these interests are absolutely different for Turkey and Russia. During the last 20 years the two countries were working in a very productive way because they had a thin layer of common interests. Yet, big geopolitical conflicts were never gone.

"During the last 25-30 years, Turkey was developing economically, financially and militarily. Turkish President Erdogan wants to destroy secular Turkey. There is also a purely medical factor: Erdogan has leukemia. He has been taking chemical drugs for years and these drugs affect his state of mind making him psychologically unstable. They were growing this steroid pitbull, just like they used to do with Hitler."

"What do common Bulgarian people think about it?"

When Turkish Prime Minister has recently paid a visit to Bulgaria, many people took to the streets under Bulgarian and even Russian flags. The people were chanting: "Out of Bulgaria!" "Down with Turkish terrorism in Syria!"