The speaker of the parliament of Brazil, Eduardo Cunha, initiated impeachment of President Dilma Rousseff. Brazil plays politics like football - recklessly, with little concern about its image on the eve of the Olympic Games. Who profits from this anarchy? 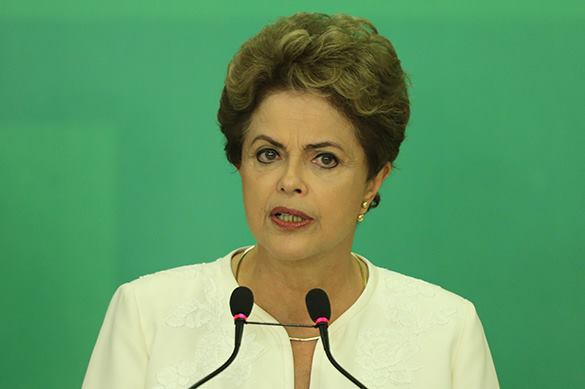 On December 2, the head of Brazil's lower house of parliament, Eduardo Cunha initiated the procedure of impeachment of Brazilian President Dilma Rousseff. He wrote in his Twitter account that it was a demand of the "street." In fact, Cunha is little interested in the "street" - he is much more worried about his personal interests.

Brazilian President Dilma Rousseff is accused of violating tax laws and manipulating public funds during her election campaign in 2014. Specifically, the Treasury was underreporting budget expenditure by delaying payments for social needs.

The money for the payments was borrowed from state-run banks, although the Congress was unaware of this. Thus, the population received a positive image of the Workers' Party (PT) to swing the presidential election.

The lower house of the parliament will set up a special commission to impeach the president. Should the opposition collect 342 votes from Brazilian MPs, the commission may find Rousseff guilty, and she be removed from power for 180 days.

Afterwards, the upper house - the Senate - will hold a plenary session. In the event senators support the verdict, (two-thirds will be enough), the president will be removed from office and deprived of an opportunity to take public positions for eight years.

Who is plotting against Dilma Rousseff

"I have received with indignation the news of the decision of the chairman of the lower house of the parliament to begin impeachment proceedings against the mandate that was granted to me as a result of democratic elections by the people of Brazil. The motives behind the decision are unfounded and baseless," Rousseff said in a televised address.

"I am not suspected of embezzling public funds. I do not have any accounts abroad. I did not conceal my property from the public. I've never tried to put pressure on state institutions to protect my own interests," she added.

"We can not allow the interests of certain individuals to shake democracy and stability of our country. We must stay calm and trust in our institutions and democratic state" Dilma Rousseff said in a televised address.

What interests of which certain individuals?

Now is a "good time" to attack on the leftist government of Brazil. The economic situation in Brazil leaves much to be desired. The nation's GDP will fall to 3.2 percent this year. The inflation rate will make up ten percent, the unemployment rate - nine percent. In Russia, these indicators are nearly the same, but the Russian society is consolidated around the president.

The Worker's Party (PT) has achieved a lot in 12 years of Lula's and Rousseff's rule. About 30 million Brazilian people no longer live in poverty, 44 million improved their living standard to the level of the middle class. More than 20 million jobs were created. Today, Brazil is the seventh economy in the world with 371 billion dollars in gold and currency reserves.

Brazilian oil is all that matters

The attack on the PT started in 2006, after the discovery of the world's largest oil fields on the shelf. The government stated that the oil fields would be developed in the interests of the nation. This caused discontent in Brazil's northern neighbor - the USA. Washington turned to those, who offered to invite US companies for the development of shelf oil fields, particularly to Aesio Neves - the leader of Brazil's largest opposition party, the Social Democratic Party of Brazil (PSDB). Yet, Rousseff won her second mandate in 2014.

Then there was the "Car Wash" case (Lava Jato), according to which Dilma Rousseff, when serving as the chief of the board of directors of state-run oil company Petrobras in 2003-2010, could not but know that her top managers were signing contracts on behalf of the company to receive a commission of 3 percent from every contract. The funds were subsequently used to bribe politicians and officials.

The purpose of this fabricated case was to shatter Petrobras and give control over oil production to foreign companies. Now we are witnessing the impeachment procedure. Everything that is now happening in Brazil is similar to the scenarios that were used in Syria, Iraq and Libya: oil fields, disloyal leaders, growing protests, adequate media coverage, and the removal of the government from power.

For the time being, Neves is acting in tandem with Eduardo Cunha, but their ways will part, because Cunha wants to be president too. He left the coalition of the Workers' Party in March 2015 and formed the anti-presidential coalition in the Congress. Cunha is suspected of amassing the fortune of 68 million real through the use of corruption schemes.

"Many of those who want Rousseff impeached want to build a political capital for themselves in light of the coming elections. The ruling elite understand that impeachment will plunge the whole political life of the country into anarchy, because it will affect not only the image of the president, but also of the vice-president, who is also involved in the scandal with oil company Petrobras," Boris Martynov, deputy director of the Institute of Latin American Studied at the Russian Academy of Sciences todl Pravda.Ru . "There are many corrupt officials who struggle against corruption to cover up their criminal activities. This is a self-protection device - to blame someone else," he added.

Many Brazilian experts believe that impeachment will not work. However, the goal will be achieved - Brazil will be weakened from within, and US-loyal people will win the next election.

"The US strategy is to slow down potential growth centers, - continued Boris Martynov. - Why do they want to slow down Brazil? Brazil is a BRICS member. The United States is taking advantage of another wave of economic crisis in Brazil. It is just enough to use a keyboard to take people to the streets and use the same slogans - put an end to corruption," the expert concluded.