On October 20, Syrian President Bashar Assad visited Russia to conduct a meeting with Russian counterpart Vladimir Putin. According to the Kremlin website, the talks were conducted in both extended and narrow formats. 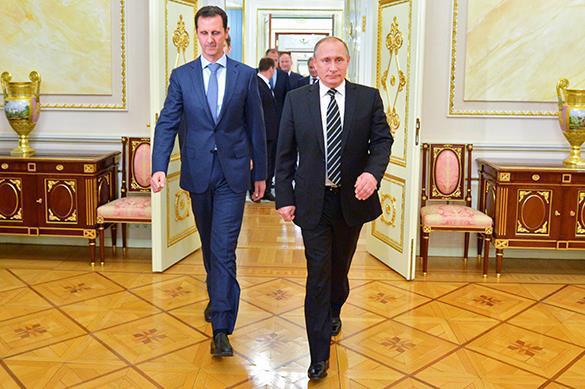 "In accordance with your request, we have decided to provide effective assistance to the Syrian people in the struggle against international terrorism that unleashed a real war against Syria. The Syrian people have been resisting and struggling against international terrorism for the past several years almost single-handedly, suffering serious losses, but also achieving significant positive results in this struggle," Russian President Putin told his Syrian counterpart.

Also read: Russia shows who's the boss in the Middle East

The Russian president said that the actions of international terrorists raised serious concerns in Moscow, as there were more than 4,000 residents of former Soviet republics fighting against government troops in Syria. "Of course, we can not allow them obtain military experience before coming to Russia," Putin added.

"Syria is a friendly country for us. We are ready to make a contribution not only to the struggle against terrorism, but also for the political process, of course, in close contact with other world powers and countries of the region that are interested in peace resolution of the conflict," the Russian president stated.

In turn, Bashar al-Assad expressed his gratitude to the Russian administration and to the Russian people for their assistance to defend Syria's unity and independence, while acting within the framework of international law.

According to Bashar Assad, Moscow has prevented a much more tragic scenario in Syria from developing. "If it wasn't for your actions and your decisions, terrorism would taken much larger territories," assured Assad, stressing out that terrorism was a real obstacle to finding a political regulation for the crisis in the region.

Also read: Bashar Assad: They want to topple me for my friendship with Russia

Experts suggest that Putin and Assad also discussed the political future of Syria, as well as an opportunity to conduct early elections in the country. However, this information has not been confirmed officially. All the meetings during the visit of the Syrian president to Moscow were closed at Assad's request.

Assad's visit to Moscow has become his first trip to a foreign country since the beginning of the crisis in Syria in 2011.

"In fact, the Russian President was informed by his Syrian counterpart about the state of affairs in Syria in detail, as well as about future plans," Putin's spokesman Dmitry Peskov said, TASS reports.

Russian MPs will go to Damascus to meet President Assad and members of the Syrian Parliament on October 22.

Turkey showed a very harsh reaction to Bashar Assad's visit to Russia. According to Turkish PM Ahmet Davutoglu, Assad could stay in Moscow for good. According to the Turkish official, it could be a solution for the power change in Syria.

"If Assad had stayed in Russia longer, the Syrian people would have been calm. If he could stay in Russia forever, it would trigger a transition period in Syria," Ahmet Davutoglu said, Pravda.Ru reports with reference to Reuters.