Serbian paradox: Between Russia and NATO

Vladimir Putin came late for the meeting with Angela Merkel, because he was celebrating Serbia's liberation from Nazi invaders. The president of Serbia decorated Putin with an order and called Russia Serbia's great friend. This happened at the time when Serbia prepares for NATO and EU member. Pravda.Ru interviewed chief officer at the Institute of World Economy and International Relations of the Russian Academy of Sciences, Polina Sokolova, about the paradox. 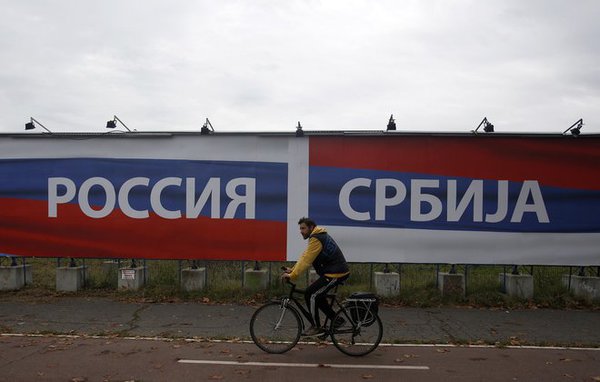 "Does this warm welcome from the Serbian administration mean anything or was it just a formality?"

"It was an indicative event, because Russia is experiencing a complicated foreign political situation because of the war of sanctions with the EU, the USA and other countries. Serbia, as a EU candidate, has been staying under pressure for long already. The West wants Serbia to join the sanctions against Russia. Putin's visit to Serbia and the way he was welcomed there is indeed an outstanding event. No other European leader will dare to give Putin such a warm welcome now.

"However, I would not consider all this from the point of view of bilateral relations. If we look at the relations between Serbia and Russia paying no attention to the war of sanctions, then this is quite a traditional event. Yet, the military parade was something new, of course. It was the first parade in Belgrade in 30 years. I think it can be explained with the origin of the sitting Serbian administration. President Nikolic and Prime Minister Vucic come from the radical Serbian party that has the national and patriotic ideology, they respect WWII heroes. Therefore, the ideological roots of the Russian and Serbian administrations coincide.

"Serbia has been trying very well to keep its neutrality about the events in Ukraine. Serbia does not join the sanctions against Russia because it has very close brotherly and spiritual relations with Russia. Nevertheless, Bulgaria does not act like that, even though this country is close to Russia too. Bulgaria was playing a different role in the Second World War. For the Serbian administration and population, relations with the EU play a strategic role. No one expected that this government would sign the agreement on Kosovo so quickly. Serbia is one of the most developed of all Western Balkan countries. Economically, Serbia is well-prepared for the EU membership from the economic point of view. Serbia's constitution excludes NATO membership, which is an obstacle for the country to join the EU. If Serbia does not join NATO, it will become the only country that joins the EU without joining NATO. It will be very interesting to see how the situation unfolds at this point. For the time being, I do not think it will happen. Serbia has bloody history of relations with this bloc. All these slogans - "Putin, save us from NATO" - express the emotional attitude of people, who suffered from the bombings of NATO in 1999. Serbia conducts talks with NATO, because the alliance is a framework structure, like the European Union. The alliance is responsible for the entire Balkan region on the way to European integration, which is their primary strategy for the future."

"It was reported that Russia was actively investing in the Serbian economy. Is it true?"

"Russia is not in the top five of investors. The main investors are Italy, Germany, Austria, Slovenia and France. Russia's Gazpromneft acquired a part of the Serbian oil industry. This Russian company is the largest investor. Russian investment in Serbia has been growing lately. In commodity circulation, Russia is ranked third after Italy and Germany. One should bear in mind the fact that the commodity circulation between Serbia and Russia is unbalanced. Russian energy carriers account for seventy percent of Russian exports, because Serbia depends on Russian raw materials. Russia and Serbia have a free trade zone that has a very serious potential for development. Ukraine could follow Serbia's example as a county that is a member of the free trade zone with Russia that moves towards the European Union. I do not think that the relations between Russia and the European Union will worsen considerably. The Ukrainian crisis will be resolved sooner or later. Russia's relations with Serbia and other countries of Western Balkans may contribute to the creation of joint European space, including Russia and post-Soviet countries. This is basically the only way to solve issues of borders and statuses.

"In Serbia, there is no Political party that would support a U-turn from the European Union to Russia. Putin is extremely popular in the Balkans, but it goes about emotional people with certain views. They do not represent any type of force from the political point of view. There are three parties in Serbia that advocate the country's movement away from the European Union to the Customs Union. These parties are called Doors, the Russian Party and Kostunica's Democratic Party. Unfortunately, they did not make it into the parliament. Perhaps, balancing between Russia and the European Union is a necessary peculiarity of Serbian politics. Hopefully, cold war is history. I believe that Russia's integration into global economy and global international relations is inevitable."