Memories of 2011: From Libya to Norway 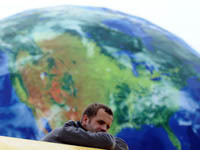 The year 2011 will be remembered for a number of significant political events. "Arab Spring," regime change in Tunisia, Egypt and Libya, waves of refugees. The debt crisis in Europe and the accident at the nuclear power plant in Fukushima had political implications. The world has lost a prominent dictator and terrorist number one. Norway shuddered at the actions of Breivik. China continues to increase its production capacity.

Among the dozens of major events of 2011, the January fall of the Tunisian regime of Zine Ben Ali should be highlighted. He had prominent political longevity and ruled unchallenged for over 23 years. His overthrow marked the triumph of the "Arab spring" and served as a detonator for mass actions in other countries, including Bahrain, Egypt, Yemen, Libya, Syria, etc. At the same time it gave rise to concerns about the crash of secular regimes along with the "dictators" and their subsequent replacement by Islamists.

The next was the February fall of another Arab longstanding ruler - Hosni Mubarak, who ruled Egypt for nearly 30 years. This event will have impact for years to come, as this country is one of the most important ones in the Arab world. The events in this country have very important meaning for the entire region. It has become clear that the change of power in Egypt did not lead to calming the passions, and that its political future in light of the rise of Islamist sentiment is very uncertain.

One of the most significant events in 2011 was the war in Libya and the October murder of one of the most prominent leaders of the Arab world Muammar Gaddafi, who has devoted his life to building the state in the so-called "third way". As a result, his brainchild of Jamahiriya that took nearly 42 years of his reign to create and representing the best ideas of Arab socialism, has fallen. However, it is too early to talk about their early collapse. Once the Libyans get "cured" from Islamism, the ideology of the "third way" can be revived again. So far we must note the fact that the removal of Gaddafi widely opened the door for the Islamists in Africa.

The consequence of the "Arab spring" was the influx of North African refugees to Europe, which gave rise to many problems. The name of the Italian island of Lampedusa has become known to everyone. France unilaterally closed its border with Italy and Denmark, and decided to introduce permanent control on its borders. British Prime Minister David Cameron and French President Nicolas Sarkozy one after another admitted that the policy of integrating Muslims into European society has failed. This topic that for a long time was half-banned in Europe is now being actively discussed.

On July 22 the entire world shuddered at the series of terrorist attacks in Norway arranged by a loner Anders Breivik. The massacre on the island of Uta and explosions in the center of Oslo killed over 70 people, and many more were injured. The terrorist did not deny that his actions were a response to the dominance of immigrants in Norway and other European countries. The target was the camp of the left Norwegian Labor Party fairly tolerant to the nationals of other countries. Apparently, the terrorist wanted to deal with the Prime Minister Jens Stoltenberg, who often visited such events, but, fortunately, he was not there.

In 2011, China has shown itself as a serious competitor to the U.S., having overtaken Japan in terms of the economic indicators and, according to economists, became the second economy in the world after the U.S. In addition, China has shown a number of other examples of its power: introduction of the first Chinese aircraft carrier; testing of the fighter of 5th generation, further implementation of the ambitious program of space exploration, including its own orbiting space station, etc.

The debt crisis in Europe brought multiple political consequences. Prime Minister of sinking Greece has resigned, his colleague Silvio Berlusconi parted with his chair and Prime Minister Jose Luis Zapatero lost the election - he was replaced by Mariano Rahoy. Ruling parties in Ireland, Portugal and Slovenia were defeated. At the end of the year, German Chancellor Angela Merkel and French President Nicolas Sarkozy in response to the crisis called for an urgent reform of the EU founding document - the Treaty of Lisbon. Numerous protests in various countries were also a consequence of the crisis.

Another fundamental event for the entire world was the completion of the withdrawal of the U.S. troops from Iraq. U.S. President Obama did keep his campaign promise. However, it cannot be said that "America has left Iraq," because there are still thousands of "invisible front men" mercenaries and PMCs. However, judging by the behavior of Iraqi Prime Minister al-Maliki toward Iran and Syria, it is clear that the Americans are at risk in the future to lose control of the regime in Baghdad.

The explosion at the Japanese nuclear power plant in Fukushima had large political implications. Death of thousands of people and radioactive contamination have dramatically affected the position of the ruling Democratic Party. Naoto Kan was forced to resign as Prime Minister and was replaced by Yosihiko Noda. The accident affected Europe as well. Germany and Switzerland have adopted plans to shut down nuclear power plants and at the German Land elections the Green Party secured a record number of votes. The opponents of nuclear power are active in other European countries as well.

Despite the fact that the U.S. did not provide convincing evidence of elimination of a "terrorist number one" Osama bin Laden, which, according to the Americans, took place on May 2, this statement is crucial. The US will inevitably have to change the list of "anti-heroes" for 10 years topped by Osama and, therefore, identify new threats to justify pursuing an aggressive foreign policy. Since the U.S. raid in Pakistan the relations between former allies in Washington and Islamabad deteriorated markedly.

One of the major events with unclear consequences happened in the Far East late in the year. The "Dear Leader" of DPRK Kim Jong Il passed away. His funeral turned into an action broadcasted around the world. Now everyone is wondering where the new leader Kim Jong-eun, who is not even 30 years old, will lead North Korea. There are questions as to what will happen to North Korea's nuclear program, whether a restructuring in North Korea would begin or whether the country will continue to be an island of hereditary socialism.

In the CIS territory the main political episode was the criminal case, arrest and subsequent seven-year sentence of the former Prime Minister Yulia Tymoshenko. This decision provoked a negative reaction both in Russia (Tymoshenko was charged for gas contracts with Russia) and the European Union (which considers Tymoshenko one of its own). Ukraine itself is split roughly in half into the supporters and opponents of her arrest and conviction. Viktor Yanukovych got serious problems that caused a failure in signing the EU Association. Russia did not make any concessions in the gas issue either.