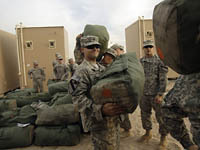 The USA announced the completion of the army operation in Iraq, which began in the country in 2003. US President Obama said that US servicemen would leave Iraq before December 31, 2011. Obama did not declare it either a victory or a triumph, like his predecessor George W. Bush did. However, Obama preferred not to say anything negative about the Iraqi operation, which he previously described as silly.

Nevertheless, Obama said that US soldiers were leaving Baghdad "with heads held high."

"Everything that American troops have done in Iraq, all the fighting and dying, bleeding and building, training and partnering, has led us to this moment of success. You have shown why the US military is the finest fighting force in the history of the world. The war in Iraq will soon belong to history, and your service belongs to the ages," he said.

He said the war had been "a source of great controversy" but that they had helped to build "a sovereign, stable and self-reliant Iraq."

Sovereign, stable and self-reliant Iraq? Terrorist acts continue to occur in the country on a regular basis. As many as 38 people were wounded and killed just a couple of days ago, when a road tanker exploded in Tall-Afar. In addition, millions of Iraqi refugees do not rush to return to their sovereign and stable homeland that has been "rescued" by the "finest fighting forces in the history of the world."

Officially, there are approximately 1.4 million Iraqi refugees in Syria alone. The unofficial number of them is at least 1.5 times larger. All of those people lead miserable existence; many women have to work as prostitutes to be able to support themselves. The US troops are leaving, but the refugees are not going to return to their countries.

Pravda.Ru asked expert opinion from a native of the war-torn country, Khaleed Aliyas, a poet, to find out what happens in Iraq today.

"The withdrawal, which Obama announced, is just a show. The Americans have more than 500 bases and defense centers all over Iraq. They have withdrawn their attack combat units from the country, but it does not mean that there is no US military presence in the country.

"First off, a considerable part of US troops has been withdrawn to neighboring Arab monarchies of the Persian Gulf. It goes about Kuwait, Bahrain and Saudi Arabia. Can we call it a withdrawal? A US group in Kuwait, for example, can arrive in Iraq's Basra, for instance, in 30 minutes, in case they receive a command for it.

"Secondly, the soldiers of private military companies play the role of occupation forces. The notorious Black Water is the largest one of them. Those mercenaries have committed thousands of crimes against the Iraqi nation. They are used to do the dirtiest work, where the presence of regular troops is not desired.

"Thirdly, pay attention to the number of US officials in Baghdad. Officially, they have 20,000 people working there, whereas the unofficial number is 60,000. It goes without saying that it is much more than they actually need. This goes about both diplomatic officials and security. Try to guess what those thousands of employees do.

"As for the organization of power, more than a half of the MPs are pro-American hirelings. The deputies who support the idea of the sovereign Iraq are in the minority. When the Americans launched their campaign in Iraq, they had the goal to topple Saddam Hussein and liquidate Iraq as a sovereign state that would no longer be capable of playing the leading role in the region.

"The litmus paper about the real state of affairs in Iraq is the voting of the Arab League regarding Syria. During the first voting, Iraq did not support the anti-Syrian resolution. However, the Iraqi prime minister was summoned to the USA soon afterwards. Next time, Iraq voted the way the West wanted it to vote. This also proves that Iraq has not been liberated from the American occupation - this occupation continues.

"Nowadays, governors threaten Iraq's sovereignty at the local level. Many of those governorы support federation, which creates the danger of separatism. It is the center that stands behind this situation, because the central authorities of the country do not give enough money to the governors. Iran's influence is noticeable in southern Shiite areas of Iran - Iran does not mind including those territories into its own spheres of influence. This negative influence has not been strong during the recent years, though.

"Obama says that the Americans have supposedly given stability to the Iraqi people. What stability is he talking about if there is not even a day without explosions? This is what the Americans do - they try to continue the clashes between the Sunnis and the Shiites. It will be hard to reach sovereignty of the country against such a background. The USA and its allies do not need the strong and sovereign Iraq.

"As a matter of fact, the country is ruled by the mafia that feeds from Western oil companies. They sell children for human organs. This has become profitable business both for the criminals inside Iraq and in the USA. They have billionaire thieves in the government.

"The country has been destroyed. There is no electricity and water supplies in many places. There are two million widows and five million orphans in the country right now. This is the prosperity and stability that the finest fighting force in the history of the world has given us. Now they want to sow the seeds of this "democracy" in Syria."