One Million March for Gaddafi: Where is this story? 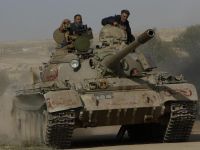 Last Friday one million Libyans took to the streets of Tripoli to march in favour of their Brother Leader Muammar al-Qathafi and against the criminal precision-terrorism wrought on Libya's population by NATO and the terrorist elements they are protecting. Yet where is this story?

In her interview with Press TV*, the journalist Lizzie Phelan spoke about what she saw on her travels around Libya. What she tells is not propaganda, it is first-hand evidence of the truth inside the country which Muammar al-Qathafi inherited as the poorest nation on Earth, and transformed it into the richest in Africa. Have his enemies done anything of the sort?

In this amazing interview, Lizzie Phelan backs up online reports from Pravda.Ru sources inside Libya that on Friday a mass demonstration in support of Muammar al-Qathafi took place in Tripoli. One million Libyans out of a total population of six million came out into the streets in support of their government and against the counter-revolutionary reactionary Islamist terrorists that NATO is supporting.

This would be the equivalent of a demonstration of ten million people in Britain or France or 50 million people in the USA. Would Cameron, Sarkozy or Obama draw such crowds of supporters? If they got ten times less they'd be letting off fireworks. It shows the measure of these, er...men, beside Colonel Gaddafi.

She referred to the revolt and disgust felt by ordinary Libyans, something communicated to us by our contacts, namely against the sheer evil of Cameron and Sarkozy and underlined the determination received by Pravda.Ru from sources that in future no contracts should be signed with British or French companies after this terrorist outrage.

"This apology by NATO is an absolute joke. It's the first apology we've had from them in the three months despite the fact that civilians have been dying at the hands of NATO air strikes everyday in the past three months there have been thousands of strikes on the country so they made the apology yesterday on Sunday," she stated, adding that "But again at 2am in the morning there was another attack on the city of Sorman, 130km west of Tripoli where a further fifteen civilians were killed and a further three children were killed."


Phelan also highlighted another point, entirely missed by western media which have treated the Libya story with a disgraceful degree of mismanaged facts, poor journalism and bias, namely the harassment, persecution and slaughter of black Libyans by the Benghazi terrorists and the lies spread by Al Jazeera and others that these were mercenaries. They were not.

Photo: Unarmed innocent civilians waving feather dusters and saying "Oh my goodness! Why are they attacking us?"