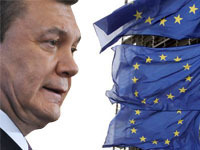 The persistent desire of Ukrainian President Viktor Yanukovych to become a part of Europe has resulted in a confusing situation. Ukraine took part in Eastern Partnership summit in Warsaw. Clouds began to gather above Mr. Yanukovych a lot earlier - soon after the beginning of the trial of Yulia Tymoshenko.

"The majority view [in the EU] is that the agreement can be finalized only if the Tymoshenko case is solved," Reuters quoted Alain Juppe, the French foreign minister, as saying. "It means having a free and fair trial and abandoning the unjustified charges against her.

Ukraine ignored the remarks from the French official. As a result, Mr. Yanukovych received a letter written by two women. One of them is known as US Secretary of State Hillary Clinton. The other one was EU foreign policy chief Catherine Ashton.

It was a personal letter, but it just so happened that the essence of it was made public. The authors particularly wrote that the charges against Tymoshenko were politically motivated. In addition, the case against the former prime minister of Ukraine demonstrated the absence of the supremacy of law in Ukraine. Clinton and Ashton concluded the letter saying that Tymoshenko's conviction would irrevocably ruin Ukraine's reputation abroad.

The Ukrainian president did not respond to the ladies.

Viktor Yanukovych had a meeting with three high-ranking European officials during the annual YES conference (Yalta European Strategy). The Ukrainian president has a conversation with Commissioner Stefan Fule, Swedish Foreign Secretary Carl Bildt and Elmar Brok, a German member of the European Parliament.

The message from the European officials was clear and simple. Tymoshenko must be freed. Secondly, Ukraine must create all necessary conditions to give her an opportunity to participate in the forthcoming elections.

Should Tymoshenko be released? Yes, she should be, immediately, former EU foreign policy chief Javier Solana, who also attended the forum, said. Politicians should not be treated like criminals or punished for political decisions, he said.

Several days later, though, Ukrainian prosecutors claimed that the "Ukrainian Joan of Arc" must be jailed for seven years. The court will deliver the verdict on October 11.

Several more days later, Mr. Yanukovych set off for the Eastern Partnership summit. The story reminds an old joke. "I was walking along a desolate street yesterday and was raped. I am going to that street tonight again."

As EU President Herman Van Rompuy said at the briefing, Tymoshenko was discussed Thursday evening with Yanukovych during the dinner of heads of state and government, during bilateral meetings, including with German Chancellor Angela Merkel, as well as during the plenary session on Friday," reports Deutsche Welle radio.

"We expressed our concerns about the fate of the former prime minister," EU President Herman Van Rompuy said, "and we expressed our rejection of the possible selective use of judicial measures against members of the former administration," the message on the official website of Yulia Tymoshenko said.

In turn, Barroso said that he supports Ukraine's course towards European integration. He said Ukraine has an opportunity to become the first country of the Eastern Partnership project. However, he added, Europe was extremely concerned about the case of Yulia Tymoshenko.

"We have presented to the authorities of Ukraine with a very clear opinion of the European Union and of each and every one of us individually, namely that the bad treatment of the opposition, the violation of citizen and civil standards infringe very gravely upon the execution of [Ukraine's European] aspirations," Polish Prime Minister Donald Tusk stated.

Everyone in the West is very well aware of the fact that Tymoshenko's political views did not serve as the reason for her trial. Tymoshenko used to be able to use world's strongest forces, including the United States, as well as international financial institutions, such as the IMF. Nowadays, Yulia Tymoshenko has turned into a dumb weapon used by someone else's skillful hands.

It is worthy of note that the association agreement, which Ukraine would be able to sign with Europe on condition of Tymoshenko's release, does not stipulate Ukraine's EU membership even in the long-term perspective.