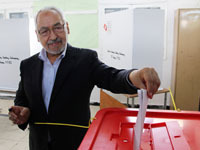 Freed from the power of an authoritarian leader Ben Ali, Tunisia is at risk of getting rid of the secular regime in the future. This is clearly the outcome of the elections to the National Constituent Council held in Tunisia on October23 that must largely determine the further development of the country.

A moderate Islamist party Ennahda ("Revival" in Arabic. - Ed.) took a strong lead . It secured nearly 40 percent of the vote. Before the fall of Ben Ali it was banned, and its leader al-Ghannouchi was forced to live in exile.

Meanwhile, some experts see the past elections in Tunisia as evidence of the development of "Arab democracy". Thus, according to Abdelbari Atua, an authoritative Arab politician, chief editor of "Al-Quds Al-Arabi" newspaper issued in Britain, Tunisians have dispelled the myth according to which there can only be an authoritarian form of government in the Arab world, and that freedom leads to anarchy. He said that the general opinion has always been that a social explosion in the first place would happen in the Arab East, for example, in Egypt, Syria or Yemen, but the beginning will be laid in Tunisia. There is low unemployment in the country and relatively high standard of living, good education and quality health care. Now, everyone is watching the experience of building a democratic state in Tunisia ".

Mr Atua apparently forgot what ended this form of democracy and freedom of expression in Algeria 20 years earlier, where, after the Islamists won the election in the country a still smoldering civil war has begun.  However, the difference between Algeria and Tunisia then and now is enormous. First, the latter still has the election of deputies of the Parliament and the President ahead. Second, the Algerian Islamic Salvation Front (FIS) won with a far more convincing result with nearly two-thirds of votes and an opportunity to form their own government. The Tunisian Islamists have a long way to go to get this kind of results. In any case, it is too early to talk about the possible emergence of the "Islamic government".  Third, Ennahda, at least in words looks much less odious in contrast to FIS. Its leaders assured that they were not going to introduce Sharia law in Tunisia and restrict the rights of women. In addition, they strongly dissociate themselves from the more radical Salafists.

However, there are significant negative aspects. The Libyan rebels that toppled Gaddafi with the support of NATO have expressed their desire to introduce Sharia law. It is clear that the events in neighboring Libya cannot but have a destabilizing effect on Tunisia.  However, the country still has a difficult and thorny path of transformation next year. The elected National Constituent Council has yet to determine the structure of the country. In particular, develop a new constitution, form a system of legislative and executive power and elect a temporary head of state and form an interim government. After that Tunisia will face new elections, not only parliamentary but also presidential. The president of the Middle East Institute Yevgeny Satanovsky shared his thoughts in an interview with Pravda.Ru:

"The Islamists are in power in Tunisia. Yes, they did not receive the necessary support for the formation of other parties without the participation of the government. But it will not stop them. It is clear that there will be no government coalition in the country without Ghannouchi, whose image and prior action   leave no illusions about what will happen in Tunisia. Gradually the Sharia will be implemented. All this is actually programmed by the ongoing economic crisis in the European countries that are key partners for Tunisia. Significant investments in its economy should be expected. The next step will be reduction of foreign trade, an additional decline in the tourism sector, which gave the country a significant portion of foreign exchange earnings.

"Yet, this crisis opens up wide horizons for strengthening the influence of the Islamists. Instead of Western investment, the money flows in from Qatar and Saudi Arabia, the influence of Turkey is increasing. This automatically means an increase of the sentiment in Tunisia, and it is clear who will support these funds. Of course, we should not expect that tomorrow this country will see anything similar to the Islamic Revolution in Iran. The process will be gradual, but it will go well in a given direction. You never know what the leadership of Ennahda has promised.

"The more so that Tunisian Islamists will be pushed for radical action by their Libyan counterparts, who openly declared a desire to establish the Sharia. They will inevitably try to jack up the situation in this country.

"The attempts to rein them will be fruitless. Cautionary statements of the European Commissioner Catherine Ashton on the Libyan Islamists only show that this lady is as smart as she is beautiful. As I said above, the West has nearly no leverage to change the situation in their favor and to prevent the triumph of the Islamists.  If we were to summarize the above, it is clear that the times of secular regimes in North Africa are coming to end. The region is starting an era of instability that will last for decades. Only Algeria remains that will have a tough situation as the Moroccan king agreed to increase the effect on the power of local Islamists and approved the proposal received from Jordan that actually means entering into an existing single monarchist coalition."

Islamic fundamentalists do not recognize the borders "drawn by the colonizers" and for them the victory in Libya is the starting point for at both the Algerian and the Tunisian direction. If Ennahda shows insufficient efforts in dismantling the existing under Bourguiba secular regime, there is no doubt that it will be helped.  The worries are serious. The Libyan Islamists in Tunisia have albeit not particularly numerous, but fairly active supporters. Think about a recent surge in activity of radical Islamists in the town of Sousse, where fundamentalists have attacked representatives of the administration and teachers at a local university.

The police have failed to intervene at a time when armed thugs with knives broke into the university building. The Dean of the Faculty of Philology was injured. The rage of the extremists was caused by the fact that the administration of the university refused to enroll girls who came to take an exam wearing niqab, and flatly refused to show their faces at the time of admission to the university.

It is worth noting that the most noticeable activity of Islamic radicals is in the poorer southern regions, where, incidentally,  Ennahda was particularly successful. Although there are not that many radical Islamists in Tunisia, in case of failure of the authorities to improve the lives of the people, it will increase significantly.