Fukushima - Meltdown? Are they hiding something?

Now is not the time to start scare mongering. Indeed the first priority of all of Humanity is to stand side-by-side with the brave people of Japan as they struggle heroically with the aftermath of a visitation from Hell. Nothing to worry about at Fukushima? One thing is certain: this is the end of the Nuclear Spring. 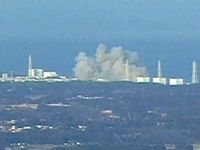 The fact that reactors 1,2 and 3 have sustained damage at Fukushima I Nuclear Power Plant - or Fukushima I Genshiryoku Hatsudensho Daiichi (which has six in operation and two others planned, making it one of the largest nuclear power plants in the world) is proof of the fact that nuclear power is not only unsafe, it is criminally negligent to build nuclear power stations in an area near one of the most active fault lines on the planet, an area prone to massive earthquakes.

While it is understandable that the Japanese authorities would wish to play down fears, especially after the earthquake and tsunami, we have to remember Japan's own poor record regarding transparency after nuclear incidents. In 2003, 17 nuclear plants were shut down after it was discovered that TEPCO, the Tokyo Electric Power Company, had hidden information on accidents.

We have also to remember that there is a serious potential for a meltdown right beside a geographical fault line - what worse place to have one? - and we have to examine the evidence unfolding before our eyes, because we are speaking about a calamity which could potentially not be limited to the shores of Japan. Quite how much further it spreads depends on what happens in the forthcoming hours. The scenario is not good.

For a start, the evacuation operation has covered up to 200,000 people - a massive number -

and proof that the situation is extremely serious. Secondly, iodine kits have been distributed on a vast scale, meaning that some form of contamination has already taken place. 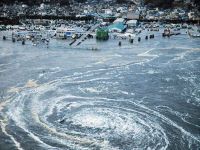 The cooling system broke down on Saturday, provoking explosions at reactor 1 and on Monday, reactor 3, which in turn caused damage at reactor 2, disabling the pumping system, which caused the water levels to drop so fast that the rods were (totally) exposed twice, the last time for a period of about two and a half hours - enough to send radiation into the air. The last explosion was due to a build-up of hydrogen. Eleven people were injured, one seriously, and the blast was heard 40 km. away. The question is, has a meltdown begun at any of the reactors, or all three? And what would the cost of a meltdown be right beside a fault line?

If the rods containing nuclear fuel become too hot, they begin melting. A partial melt would certainly have happened at reactor 2 today because the cooling water had been absent for long enough to send the temperatures rocketing up to 4000F/2200C. A meltdown occurs when the molten reactor core (which is highly radioactive) melts through the floor of the containment chamber and penetrates the ground under it - and then into the environment.

As this article goes for publication, technicians are battling to control the situation. They have managed to re-establish the pumping of seawater over the rods to cool them down, but the information coming from a spokesperson from Japan's Nuclear and Industrial Safety Agency at the plant is that there has been melting of the rods at all three reactors, meaning the possibility of a meltdown is high.

The vents in the containment vessel have been opened several times, allowing the escape of radiation - prompting the USA to remove an aircraft carrier from the area...and it was 160 kilometers (100 miles) offshore. 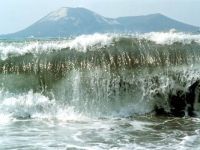 After initially claiming that Japan wanted to - and could, solve the problem by itself, on Monday evening it officially asked the USA for help and requested that the International Atomic Energy Agency (IAEA) send a team of experts.

Aftershocks are reaching over 6 on the Richter scale, and are set to last for weeks or even months. The problem is, if another massive quake hits, and with the nuclear situation being so unstable, a meltdown in one of the world's most sensitive places could occur in the coming days.

Editor's note: As Director and Chief Editor of the Portuguese version of Pravda.Ru, read in the eight CPLP countries (Angola, Brazil, Cape Verde, Guinea-Bissau, Mozambique, Portugal, São Tomé and Principe and Timor Loro Sae/East Timor), I would like to convey, in the name of all our readers in these countries, our sincerest and deepest feelings of solidarity and sympathy with the people of Japan at this very difficult moment, feeling sure that as always, they will stand together with their traditional courage and rebuild, becoming even stronger for having faced and won this tremendous challenge.