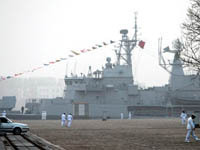 China's neighbors are concerned about media reports citing the Chinese leader Hu Jintao, who allegedly ordered the PLA Navy's command to "prepare for a war." According to him, in the coming years the Navy should "complete its modernization, gather all the forces to prepare for a war and strengthen national security." This was said at a meeting of the top military and political leadership of the country on December 6.

For China famous for its wise and prudent policy this is, mildly put, rather strange. However, as pointed out by foreign experts, the statement of the leader of China was reprinted by many Chinese newspapers. However, there is a possibility that journalists made a mistake in the translation. British analysts say that the statement of the Chinese leader can be translated from Chinese both as "armed struggle" or "military conflict", but the essence does not change much.

It is significant that in recent years militaristic ambitions of China increasingly surprised not only its neighbors with most of whom it has unresolved territorial disputes, but the United States as well.

Also read: China does not need Russian arms anymore to attack US

This year, China began its program to build aircraft carriers and is actively working to develop new anti-ship missiles and modernize its Navy. The statement of the Chinese leadership was made on the eve of the annual summit of China and United States, where the parties discussed a solution to the dispute over the archipelago Spratlys in the South China Sea.

In other words, Beijing is openly showing the United States that it intends to address this issue in its own favor. Earlier the Chinese side claimed that the Spratly archipelago (contested, besides China, by Vietnam, the Philippines, Malaysia, Brunei and Taiwan) is an integral part of China. The latter is understandable: first, the major transportation routes from the Indian Ocean to the Pacific run through the South China Sea, and second, large reserves of oil and gas are prospected in the area.

For the growing China the issue of resources is key. However, the abundance of competitors supported by the United States hinders the implementation of the Chinese ambitions for the Spratly archipelago.

The most difficult relations in regard with this issue are between Beijing, the Philippines and Vietnam. Chinese ambitions alarmed Indonesia that begins to develop a major gas field offshore in the vicinity of the disputed islands. Experts point out that the development affects the zone claimed by the Chinese.

The United States that is trying to build a new block of counties that would "restrain the Chinese dragon" is particularly concerned. It is no accident that in November President Obama has made a dramatic expansion of U.S. military presence in Australia, considering it an important base for the subsequent deployment of troops aimed against China.

However, China provided its response to such deterrence efforts of the U.S via President Hu Jintao's statement. Will China be gutsy enough to challenge the United States and its satellites? Konstantin Sivkov, Captain of the 1st Rank, the first vice-president of the Academy of Geopolitical Issues, answered this question for "Pravda.Ru":

"At the moment, in terms of the power of the Navy, China is far behind the United States. For example, it has only one aircraft carrier, while the Americans have 12 active nuclear aircraft carriers alone. Nuclear-powered submarines that China has are too noisy and noticeable for the American systems, and the radius of their ballistic missiles is only 1,700 kilometers, which is clearly insufficient to provide an adequate response.

However, in the next 10 years such imbalance will be reduced significantly. First, the Chinese are preparing to launch several nuclear aircraft carriers. Second, they are qualitatively and quantitatively increasing its nuclear submarine fleet. The existing noisy submarines will be replaced with new nuclear submarines that will be difficult for the Americans to track. In addition, their armament will strengthen significantly.

Now the Chinese are actively working towards creating a new sea-based ballistic missile with a range of eight thousand kilometers, which would dramatically reduce the chances of Americans for a favorable outcome in a possible collision.

Third, the Chinese are preparing to dramatically increase the number of other warships, including destroyers and frigates. All these are not empty promises, and every year it will be increasingly more difficult for the Americans to contain China.

This is a very positive sign for us. China relies on the development of its own Navy, not the Army, which clearly indicates that its expansion in the short and medium term will be extended to the north. However, it is not surprising as it is vital for China to ensure it receives raw materials. It buys oil and gas from Russia at affordable prices.

Yet, this is not enough, considering the growth of its economy. In this regard it is developing its Navy, which will enable China to defend vitally important interests in different parts of the globe. If today it had to "swallow" the fact that it was virtually forced out of Libya, tomorrow, gaining the necessary power, it will stand up for its rights and will have to be reckoned with."