EU wants Turkey's Erdogan to be the next 'Yanukovych'

When discussing the recent scandal in the relations between Turkey and the European Union, many pay attention to the electoral aspect of this conflict - the forthcoming elections in Germany and France and a referendum in Turkey. However, it remains unclear why Turkish President Erdogan has decided to go to the length of the conflict. 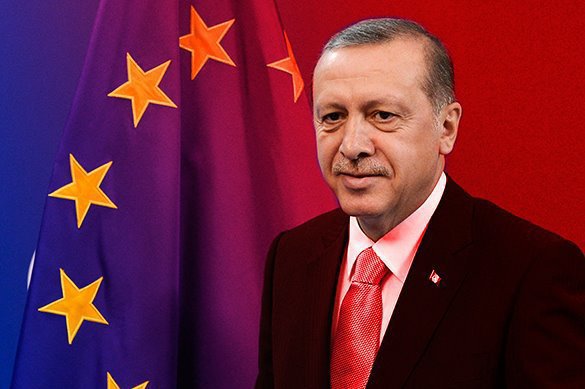 Many Russian and not only Russian political analysts or teachers of political science do not understand, for some reason, the difference between making and developing decisions in big politics. This is an aspect of paramount importance in understanding the very nature of democracy. For example, many say that we can not change anything in foreign policy, because it is the  president, who makes decisions at this point. This is a wrong point of view, because there are many people, who analyze various issues, elaborate decisions and show influence on the president.

Naturally, there are people, who make decisions, form medium and long-term policy in the European Union.

Turkish President Recep Erdogan is a very smart and experienced politician, who has an  amazing, and I would even say, phenomenal political instinct. Erdogan has a remarkable sense of danger, which allows him to stay in power for so long despite intricate intrigues in the Turkish policy. He has felt something and decided to aggravate the relations with the European Union.

There are reasons to believe that Erdogan understood that the EU was going to launch the process that could be referred to as the "Ukrainization" of Turkey, in which Erdogan would have to play the role of the Turkish Yanukovych or even Ceausescu or Gaddafi.

At first, Germany and France (as well as small countries of the "old" EU) destroyed production in Southern Europe. Spain still has Seat and Italy has Fiat, but there is practically no machine-building in these countries, nor are there shipyards in Greece). Afterwards, having seized and digested the economy and production sector of those countries, the German capital turned to Eastern Europe and the Baltic States.

Turkey next after Ukraine

The EU needs to constantly expand by destroying productions in new territories and conquering new markets. Otherwise, the EU will simply disappear in competition with Chinese, Korean, Japanese, Indian, and even Russian and American producers. The European competition will not be able to stand fair competition. Ukraine is the most recent victim of the German-French capital. The German capital has not been able to fully digest it, but the destruction of the Ukrainian national economy is only a matter of time, and the capital will need to expand further. Turkey appears to be next on the line.

It is important to understand here that capital is not malevolent or insidious. It destroys the Ukrainian economy not because Germany wants the Ukrainians to live worse and worse. On the contrary, German masters of life want the Ukrainian "untermenschen" to live well under the German "ordnung", gradually turning them into law-abiding and obedient Europeans. I think that when Ukraine recognizes the will of the people of the Crimea and people's republics of Donbass, Ukraine will become a member of the European Union.

Simply put, capital is indifferent to everything except its profit. It needs to capture new markets and destroy their production. German and French entrepreneurs naturally assume that selling Volkswagen and Peugeot vehicles in Ukraine is much more profitable than letting Ukraine make its own cars. Therefore, they have decided to let the Ukrainian Zaporozhye Automobile Plant die in peace.

After digesting the Ukrainian economy that used to be Europe's fifth largest economy in 1991, German planners and strategists will turn to Turkey as the next candidate for the "European integration." Similarly, Turkey may become a member of the European Union, if Turkey lets European giants destroy its national industry and agriculture.

Needless to say that Erdogan does not like the idea. Of course, Turkey is not Ukraine. Yet, Turkey already has its fifth column. This is the old Istanbul commercial capital, which has little to do with the manufacturing sector, but is very interested in Turkey's accession to the European Union. Representatives of the Istanbul capital despise Erdogan, who relies on industrialists of Anatolia (the Asian part of Turkey).

Yet, the Anatolian capital that has made Erdogan become the Erdogan he is today, can easily become the comprador capital in nature, because production has reached new stages, when financial services (for example, export services, export insurance, banking services, lending, etc.) play a more important role in terms of profit than production itself. To crown it all, no one knows who is stronger: the Istanbul trade capital or the Anatolian industrial capital.

In addition, there is the so-called "military" sector of the Turkish economy that remains under the control of the military. First and foremost, it goes about heavy and mining industries, as well as shipbuilding and similar industries. There are many Europe-oriented people among the Turkish military, and those people may support those, who may wish to topple Erdogan like Yanukovych.

One may say that Erdogan is a lot stronger than Yanukovych. Yet, Yanukovych managed to organize his supporters after the first Maidan in Ukraine and thus win both presidential  and parliamentary elections in the country. In 2012-2013, many considered his removal from power  absolutely impossible. Similarly, many think that it is impossible to topple Turkish President Erdogan.

Erdogan understands that Yanukovych's attempts to sit between two chairs - be nice to both the European Union and Russia - have taken him to the shameful fiasco. Probably, Erdogan correctly assesses the current situation and understands that he needs to be more sincere, more open with Russia. Hopefully, he understands that his political future and, most importantly, the future of Turkey depends on relations with Russia.