May 1st marked nine years since the largest in the history of the EU expansion to the east. In 2004, the EU was joined by 10 countries, eight of which are former socialist countries. But today it is clear that both for the EU and the member countries the "move to the east" has far more disadvantages than benefits. The situation is especially concerning for the Balts, Poles and Hungarians. 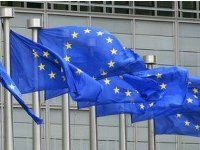 On May 1st 2004 Estonia, Latvia, Lithuania, Poland, Czech Republic, Slovakia, Hungary, Slovenia, Malta and Cyprus joined the European Union. Since that day, the EU has ceased to be a community of exceptionally highly developed countries. Despite the fact that Brussels has spent hundreds of billions of euros on moving the newcomers to the level of old-timers, the gap between them remained. Admission to the euro zone of Slovenia, Slovakia and Estonia did not make these countries as developed as their neighbors Austria or Finland.

According to the International Monetary Fund (IMF), the average income per capita in the EU in 2012 amounted to about 24 thousand euros (let's think of it as 100 percent). Portugal and Greece significantly affected by the crisis have rates of 74 and 78 percent of the aforesaid average, respectively. Italy and Spain that previously exceeded 100 percent have now fallen below (95 and 97 percent, respectively). In the developed countries of Western, Central and Northern Europe the figures are above the average.

Now let's see how things work in the former socialist countries that entered the EU on May 1st, 2004. The poorest of them is Latvia (58 percent). Hungary (63) and Poland (64) are slightly above, Lithuania (68) and Estonia (69) are even higher. As we can see, the level of income of the majority of "young" members is inferior not only to Germany, France and Sweden, but also Greece and Portugal, whose name has become a symbol of turmoil of recent years.

Slovakia that the World Bank recently acknowledged a developed country feels a bit better (77 percent). This honorary status was previously awarded to even more prosperous Czech Republic (86 percent) and Slovenia (89). They are ahead of Portugal and Greece, and may soon reach Italy and Spain - in any case, the dynamics is in favor of the Slavs. However, Slovenia is on the verge of a default, and the Italians and Spaniards are not better off.

The benefits of such a powerful expansion of the EU to the east of the "old" Europe can be seen in the establishment of a stable political spheres of influence and markets in the former socialist countries. For the newcomers the main benefit is grants and other financial assistance from the European Union as well as from some developed countries (especially Germany).

But the cons clearly overshadow the pros. German, Dutch or Finnish taxpayers are forced to pay out of pocket for pulling the novices up to their own level. Former socialist countries have actually lost independence. They have to coordinate every action both in politics and in the economy with the EU. Was it worth berating the USSR only to give up sovereignty again?

Czech Republic and Slovenia blended into the EU more or less harmoniously, although they still are far away from Austria or Sweden. The two countries have maintained their industrial potential and agriculture. Czech cars, crystal, beer, Slovenian medicines and appliances were rediscovered in the new environment. Czechs and Slovenes almost never seek employment abroad. On the contrary, Slovaks, Ukrainians, Moldovans and people from poor countries of former Yugoslavia come to these countries in search of work.

However, the costs were still high. The banking sector came under the control of German and Austrian credit institutions. It is fraught with troubles, given the historically complex relationship of Czechs and Slovenes with Germany and Austria. In German-speaking countries the descendants of those who had been evicted from the Czech Republic and Slovenia for aiding the Nazi occupation emerge now and then. They demand the return of their former possessions and threaten with lawsuits.

Slovenia was the first of the EU newcomers that joined the euro zone, and its leadership is very proud of this achievement. However, membership in the euro zone has turned into the need to contain mistakes of Greece and Portugal. And the mistakes of the Slovenian authorities have put their own country on the brink of a debt hole. Czechs in this sense were farsighted and preferred their own currency to the Euro. As a result, they survived the crisis relatively unscathed.

Poland, the Baltic States, Hungary, and (to a lesser extent) Slovakia became the "lagging Europe." At the request of the EU and its leading countries, they not only gave their enterprises and banks under the control of western institutions, but also shut down plants built during the communist era. Poland was forced to close many of its mines, and Lithuania shut down Ignalina nuclear power plant, turning from an exporter to an importer of electric power.

For the agricultural sector of the above mentioned countries the accession to the European Union turned into a disaster. Polish meat, Hungarian tomatoes and peppers, Latvian sprats, Lithuanian cheese, and Estonian sour cream are not wanted in the Western Europe. Many thousands of hectares of arable land or grassland where cows used to graze are now overgrown with weeds. Fishing boats were dismantled.

Unemployment is in double digits. As a result, millions of Poles, hundreds of thousands of Balts and Slovaks have to work in Germany, Austria, Sweden and Finland. This was before the crisis and continues to this day. As for the crisis, Hungary and Latvia were on the verge of default, Lithuania and Estonia were also adversely affected. Only Poland has been growing in recent years, but it had the lowest starting level of all.

Balts, Poles, Hungarians and Slovaks bring the EU many political problems. For example, the issues of hundreds of thousands of "non-citizens" in Latvia and Estonia, endless attacks of Poles and Balts on Russia ruin the relations with the European Union's largest eastern neighbor. In addition, there are problems of Poles in Lithuania and Hungarians in Slovakia. All this became an internal affair of the EU, and Brussels has to make a lot of effort to maintain the relations between Lithuania and Poland, Hungary and Slovakia at an acceptable level.

Nearly ten years later, it is clear that only the Czech Republic, Slovenia and Slovakia, to some extent, at least partially meet the requirements to be met by EU member state. Poland, Hungary, Lithuania, Latvia and Estonia are the economic burden. However, they can be used politically, particularly in order to once again "pinch" Russia. Only they will not become richer from these "pinches".