Russia vetoed a UN Security Council resolution on Srebrenica. The resolution called the killings of Muslims by Bosnian Serbs genocide. The harassment of the Serbian people has thus been stopped, but one still has to investigate the role of the West in the civil war in Yugoslavia. There is no one, though, who can file the lawsuit on the subject. 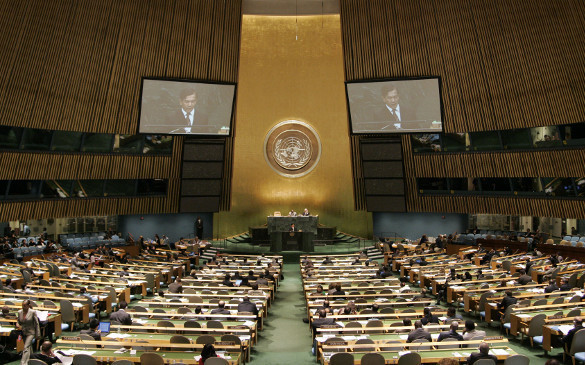 According to the West, on 11 July 1995, during the civil war in Yugoslavia, the Bosnian Serb army massacred about 8,000 Muslims, including children, in Srebrenica. However, the materials of the International Criminal Tribunal for the former Yugoslavia suggest that the Hague Tribunal listed 5,000 missing people as victims of the conflict.

In addition, the two courts do not investigate the role of Dutch peacekeepers, who had failed to prevent the massacre. The balance of interests is not being observed either. A civil war in any country is a crime on both sides. Yet, the courts focus their attention only on events in Bosnia. However, in Republika Srpska, Muslims displaced some 300,000 Serbs, whereas Srebrenica was the location of the base of Bosnian militant and executioner Naser Oric, who would kill anyone, including pregnant Serbian women.

The tragedy in Srebrenica became the reason for NATO forces to strike air blows on Belgrade.

"I was in Bosnia at that time. I was watching it all happening, Alexander Kravchenko, the leader of the Kosovo Front movement told Pravda.Ru. - Personally, I have the impression that it was Western countries that provoked and started all these events. That's why they use them to achieve their political goals."

Ten countries voted for the resolution of the UN Security Council on Srebrenica. Russia vetoed it, whereas China, Venezuela, Angola, Nigeria abstained. The meeting was interrupted as ambassadors of Russia, the UK and the US were too emotional.

British Deputy Ambassador Peter Wilson claimed Russia was siding "with those who are unwilling to accept the facts today."

"Genocide occurred at Srebrenica. This is a legal fact, not a political judgment. On this there is no compromise," he said.

US Ambassador Samantha Power said that Russia's veto was "another stain on the reputation of the UN Security Council."

In response, Russia's envoy at the UN Security Council Vitaly Churkin said that the West should first recollect carpet bombing in Vietnam and the illegal invasion of Iraq and Britain in Iraq, when millions of people were killed and the entire region still remains in a state of severe crisis.

"Why don't the United States and the United Kingdom offer to pass a UN the Security Council resolution on the subject that would call a spade a spade?" the Russian diplomat said.

According to Churkin, the humanism of the United States and Britain "gets switched on and off depending on political expediency." "It completely undermines the credibility of your statements and actions."

At the same time, Vitaly Churkin said that Moscow's opposition to the proposed draft resolution did not mean that Russia "turned a deaf ear to the suffering of the relatives of the tragedy in Srebrenica and elsewhere in Bosnia and Herzegovina." "We have been through a lot ourselves," said the permanent representative.

According to the Russian Foreign Ministry the draft of the British resolution had a "conflict potential" and was "politically motivated." "Isolating only one of numerous war crimes of that time while neglecting others is absolutely inappropriate and would only deepen the split of the Bosnian society," a statement from the Russian Foreign Ministry said.

The current pressure on Bosnia and Herzegovina is connected with the position of the head of the Republika Srpska, Milorad Dodik, Serbian political scientist Stevan Gajic believes. Dodik has had a meeting with Gazprom's chief Alexei Miller, to discuss the Turkish Stream project. In addition, Muslim gangs have been particularly active in Bosnia, Albania and Macedonia lately.

Russia has saved Serbia from execution, Alexander Kravchenko said. "Then they would recognize the Republika Srpska illegal. They would make Serbian people in Bosnia illegal. This is a rebirth for Serbia."

According to the expert, the veto has a purely moral side. "This is very important for everyone, not only for the Serbs and Russians, but for the whole world," Aleksander Kravchenko said. "We, the Russians, are above the use of human tragedy for political purposes. This is a great victory for us, especially in the awareness of our role and place in the world."

The event received extensive coverage in Serbia and in the Republika Srpska. Serbian President Tomislav Nikolic noted that the veto prevented the persecution "of the entire Serbian nation." He said that it was a great day for his country.

Another version of Srebrenica