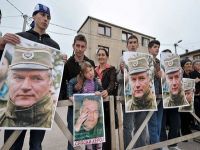 Recent events have more than proven that savagery and jungle-like "values" are what make western leadership tick. Dog eats dog, the strong eat the weak and forget the much touted democracy and freedom. They care as much about democracy and freedom as they care about last night's empty can of beans. NATO is nothing more than a terrorist organization. A gang of murderers and assassins.

International law is just something to throw in the other guy's face when you aren't wiping your feet on it. UN Resolutions aren't worth any more than that either.

Corporate western media gleefully announced the arrest of General Ratko Mladic on Thursday, thereby adding one more nail on the lid of their hypocrisy, duplicity and self serving arrogance. Mladic was arrested Thursday in a village close to the northern Serbian town of Zrenjanin.

General Mladic, known for personally leading his troops, was born March 12, 1942, in the southeastern Bosnian village of Bozinovci. He graduated from Belgrade's prestigious military academy and joined the Yugoslav Communist Party in 1965.

The information of his whereabouts came from an anonymous tip, of course, and announced by the following:

"On behalf of the Republic of Serbia I can announce the arrest of Ratko Mladic. Extradition process is underway," Serbia's pro-Western President Boris Tadic told reporters.

The Hague and western leadership have been after Mladic for the alleged "genocide" at Srebrenica where the media always speaks about "men and boys" killed as opposed to fighters and combatants.

The claim that 8,000 "innocent" Muslim "men and boys" were "murdered" at Srebrenica is pathetically repeated despite considerable evidence to the contrary, that fighters were killed, including many Serbs, and the 8,000 number is so absurd one wonders how anyone could be gullible enough to accept it. But then again, wasn't it said that the bigger the lie, the easier it will be to sell?

Srebrenica was a Muslim military stronghold. Serb villages around Srebrenica had continuously been attacked from the enclave. During the last month of the existence of the enclave, every day at least one Serb died in Muslim attacks. All together, at least 1,260 Serbs were killed. The UN knows about that. The commander of Dutch peacekeeping troops in Srebrenica also knows about it, but they are only concerned about one side.

Not mentioned was that there was terrible fighting between the sides and the Muslim commanders were more than willing to sacrifice their own soldiers. They kept attacking like ants. Serbs wanted them to surrender, but they refused and kept on coming.

Never mentioned is that Naser Oric's forces in 1992-1993 committed war crimes in eastern Bosnia against Serbs. Bodies of Bosnian Serb civilians and soldiers who had been tortured, mutilated, and executed were exhumed. Serbian villages had been burned to the ground in the Srebrenica pocket.

Add to this the well known fact that Al Qaeda was operating in Bosnia, fighting for the Bosnian Muslim forces.

*"Serbian forces supposedly disposed of 8,000 decomposing bodies. It would be interesting to learn how they managed this in addition to fighting in the war. It would not only take a lot of time and effort, but would also require quite a large space. How is this supposed to have been accomplished without them having been seen by the hi-tech satellites and U-2 surveillance?

The US has "satellites that can locate bodies decomposing underground." The question should arise: Why did it take them 3 years to locate any corpses that they claim to be in the area since July 1995? And they still do not have them to this day."

The only thing Mladic is guilty of is defending his people from genocide, and doing so successfully. 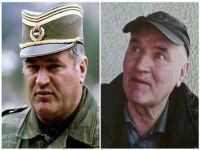 The Mladic family has requested examinations from physicians before any action is taken. There were two scars from strokes that he had suffered discovered in one evaluation.

Boris Aleksic, spokesman for the Serbian Radical Party made the following statement:

"Serb traitors have arrested a Serb hero. This shameful arrest of a Serb general is a blow to our national interests and the state. This is a regime of liars, dirty, corrupt and treacherous, a regime operated by the secret police."

A Belgrade court ruled on Friday that General Mladic was fit enough to face genocide charges at the International Criminal Tribunal in The Hague and has served extradition papers. Milos Saljic, his lawyer, has said the extradition ruling would be appealed.

Still hidden from public view or in western media is the fact that the terrorist rebels are executing, torturing and beheading innocent people. They have a blacklist of people slated for execution. Since western media made false claims that black mercenaries were coming from all over Africa to fight for Ghaddafi, black Libyans have been attacked, tortured and murdered.

These are the people being defended and aided by NATO, recognized as leaders of a future "democratic" government.

Ignored is the murder of Ghaddafi's son and 3 young grandchildren.

Ignored by the western media is the report that HRI found it was the US and not Libya using cluster bombs in Misrata.

Why does the west find it necessary to always lie? If one could start counting the lies since the dissolution of the Warsaw Pact, it would probably turn out no less than 1,000,000,000,000 lies being told, since NATO's emergence as a rogue, terrorist organization, from Yugoslavia to Libya.

Why does NATO go beyond and in violation of a UN resolution and enter a civil war taking sides against legitimate government forces, against UN law? How can NATO side with Islamist terrorists and continue to perpetrate terrorist acts day after day...and nothing happens?

Of all human vices, there is none worse than betrayal. Just look at how the most famous betrayer in history is looked upon, Judas Iscariot. Betrayal is the root cause of all other evils.

Because of one man's betrayal, another was put to death...an innocent man.

Then there's Brutus. Julius Caesar is being stabbed in an assassination attempt and turns to a man he thought his friend, one of the attackers, saying, "Et tu Brute?" He was being betrayed in the worst way possible.

The greater the trust put in the another person / nation/ leader, the greater the impact their betrayal has, then the greater the distress will be felt by the person or entity betrayed. Betrayal results in anger and repulsion towards the betrayer.

Should we declare that in the year 2011, the war against fascism was ultimately lost? Or will people finally rise up and do something?