Samantha Power and the shameful US support for Nazism 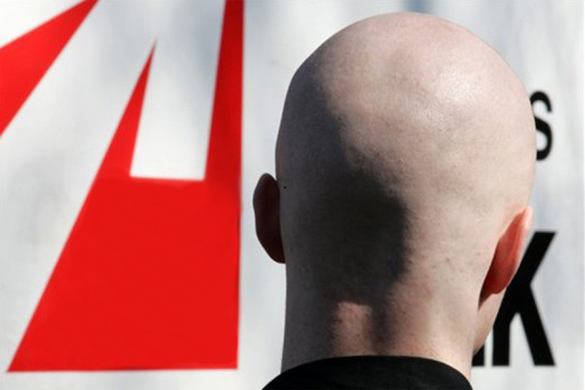 Years ago when I was a graduate student at Harvard, I remember an encounter with a red headed "activist" who had organized a talk featuring Christian Science Monitor journalist David Rohde on the Srebrenica tragedy [1-3] at the Harvard Law School around the fall/winter of 1995 if memory serves me correctly when the Bosnian civil war was in full swing.

This presentation was very typical of most "scholarly"/one-sided/biased presentations of the Yugoslav civil wars in Boston-area universities and other campuses throughout the United States during the 1990s in that we were only presented with one side of the story - the anti-Serb one.  Despite the illusion of respectability and "objectivity" (after all, this particular presentation was at the Harvard Law School), it was immediately apparent to me that the forum did not tell the entire tragedy of Srebrenica.  David Rohde did not discuss the slaughters of hundreds if not thousands of Bosnian Serb villagers by Nasir Oric and his band of Mujahadeen savages holed up in Srebrenica who beheaded, roasted, shot, raped, tortured, and committed many unspeakable but largely unreported and ignored atrocities against innocent Serbian civilians.

These mass slaughters became so frequent and regular that Gen. Mladic (the Bosnian Serb commander) decided to overrun the so-called "safe haven" of Srebrenica (for better or for worse) to remove the festering boil of Islamic terrorists there.  After over 40 minutes of innuendos and highly questionable "testimony" of what Mr. Rhode had observed after Srebrenica, I sought to challenge his viewpoints by asking some questions logically challenging the statements made (e.g. how did he extrapolate that tens of thousands of Bosnian Muslim men, teenage boys, and imported Mujahadeen who did not surrender were "executed" based upon observing a few residual objects [cane, documents, bone sticking out from the ground, clothing])?

Though I do not condone what transpired in Srebrenica on any side, it appeared obvious to me that Mr. Rohde was wildly inflating his claims regardless of the fact that all women and young children were allowed to safely leave the war torn area.  Based on what he said, I guess that we should consider what "General" Wesley Kanne Clark did in Waco Texas to slaughter some 74 Branch Davidian men, women and children in Waco Texas as "genocide".  After all, they could be considered a unique ethnic group who were just wiped out by the US army.

I had only a few minutes to make my points which the hostess "activist" begrudgingly allowed me to do.  Though Mr. Rohde did not properly answer my questions, the "activist" moderator angrily tried to challenge my viewpoint, but she wasn't a very good debater and chose to focus on "brow beating" me into submission by resorting to emotional and irrational arguments which just didn't hold water.

I thought to myself, "how did this Birkenstock wearing/pseudo-Bohemian-looking/"liberal"/backpack-toting and immature non-Harvard 'activist' manage to organize an entire anti-Serb forum with a "journalist" who won the now-discredited Pulitzer prize for his efforts to expose the 'truth' about Srebrenica at the Harvard Law School?"  It all seemed awfully suspicious to me - artificial - like a highly organized setup to spread disinformation.  After all, many of us in the Boston area tried very hard to present an alternative viewpoint about the Yugoslav civil wars from what the US State Department wanted us to hear but were unable to - we were just plain censored.

Some months later, I bumped into this red headed "activist" at the Casablanca restaurant in Harvard Square.  She, surprisingly, recognized me from our earlier exchange and walked over to greet me as if she wanted something from me.  I don't know what it was as the conversation was extremely strained - pleasant - but strained - and brief.  We then parted ways.  Later this "activist" wrote a book on genocide allegedly committed by the Serbs entitled: The Problem from Hel: America and the age of genocide, which agitated for "international" "humanitarian intervention" to resolve the internal conflicts of sovereign nations, regardless of reverence to international law.  This book, unsurprisingly, won a Pulitzer prize for its cheap and journalistic "scholarship."

Of course, beyond the highly inflated and yet-to-be-proven numbers (even decades later) of "executed" Bosnian Muslims (many of which were actually killed in battle as they sought to escape into the surrounding countryside of Srebrenica), she never mentioned the genocide of Serbian Orthodox Christians committed throughout the former Yugoslavia both in this war, WWII and WWI (three times during the 20th century.

Thus, as is so symptomatic of Western fairy tales told about Yugoslavia, we only heard less than ½ of the tragic story.  That's not scholarship - that's propaganda pure and simple.  This strange woman was none other than Samantha Power who became very useful as a Serb-hater and "new" world order (NOW) apologist.  So much so that she somehow became (embarrassingly for Harvard) affiliated with Harvard's Kennedy School of Government and later on was appointed as the UN ambassador trying to "educate" the Russians about their own history with the classic arrogance of an obedient necon and at the same time "liberal" servant/puppet for the NWO.

I don't normally like to focus on only one NWO propagandist (there are so many to choose from and they are so homogenous in regurgitating the same tired agitprop anti-Serbian racism and ignorant drivel, article after article, book after book, interview after interview), but this woman profited more than most from her pseudo-intellectual diatribe against the Serbs and it's important for Americans and other to understand the nature many of those who rise to the top in our society to become our self-styled "leaders" and who are not intellectuals, but propagandists/apologists instead.  They are not capable of finding the solutions to the world's many complex problems outside of brute jungle-style force because they are not free thinkers.

They are incapable of understanding alternative perspectives, and are fanatically obedient foot soldiers, who, like puppets, are being manipulated and told what to do:  Foment hatred against Orthodox Christian Russia and prepare the world for WWIII just as they did to establish the pretext for NATO's illegal and vicious attack on the Serbian people in 1999.

We now fast forward to the recent vote at the UN condemning the glorification of Nazism and find that only three countries vote against the resolution:  the Ukraine, Canada, unbelievably, the United States of America, land of the "free and the brave." That all three nations (the Ukraine was then part of the Soviet Union) so valiantly contributed to defeating Nazism a mere 70 years ago had no bearing on swaying the resolution's detractors in their fanatical obsession to alienate Russia.  That anyone (including Samantha Power) could vote against the condemnation of Nazism is sadly symptomatic of a horrible sickness that is consuming and destroying America and everything that this great nation once stood for.  No people or movement was ever more efficient in all of human history at murdering millions of innocent souls than the Nazis and their fanatical henchmen such as the Croatian Ustashe, the Bosnian Muslim Handzars.

As a "scholar" who is so concerned about genocide to the point that she justifies "humanitarian" genocidal intervention to counter it in the philosophy that two wrongs somehow make a right, to vote against this UN resolution is tantamount to supporting genocide (just as convicted Canadian felon Conrad Black recently wrote in support of the slaughter of Soviet citizens - particularly if they are Orthodox Christians) and that makes her a hypocrite for all the world to see.  By not supporting this resolution, Samantha Power tried to tell us the black is white and white is black and, thus (shamefully), that Nazism is OK.   This is absolutely unacceptable.

I know that my fellow Americans know history far better than the young Ms. Power and perhaps that may be the reason why not one "American" corporate-controlled mainstream media outlet reported on this shameful and embarrassing (for America, Canada and the illegal Western-backed fascist government of the Ukraine) story.  It speaks volumes about the goose stepping march toward fascism occurring within our society and the monopolistic and Goebbelesque media control via censorship that we are being brainwashed by [6].  I am honestly terrified by the astonishingly high level of corruption of our government and media as we run up to WWIII.  One way or another, this will not end well.