Serbia's destruction by the West inevitable 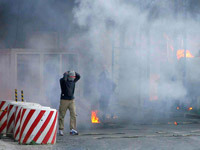 Russia is unable to protect the Serbs who live in the north of Kosovo. The UN Security Council failed to elaborate the joint position to provide security on the territory.

Russia put forward a suggestion to approve an official statement, which would give the sides the precise signal about the need to abstain from the use of single-handed and military actions.

Western powers, in the face of the USA, Britain and France rejected Russia's suggestion. The West is currently in the process of completing the legal registration of another stage of Serbia's dismemberment. Russia is an obstacle for the West at this point. We would like to remind here that the Albanian authorities of Kosovo declared independence single-handedly in 2008.

There is one thing left: to make the new "state" legitimate via the UN. The votes of 97 countries are required to finalize the process, and the West already has 94 votes. The USA and the EU won the support from island states of the Caribbean Basin and a number of African countries, the poorest countries of the world. Thus, they only need to find three more countries. One may not doubt that the missing votes will be found easily.

Russia's Ambassador to the UN Security Council Vitaly Churkin raised very unpleasant issues for the West at the session on August 30. Churkin particularly wondered why the UN had not launched investigation into illegal trafficking of Serbs' organs. He also asked his Western counterparts to explain why the UN delays the appointment of a new special representative of the secretary general of the international organization in Kosovo.

Churkin received support from Colombia's Ambassador to the UN, Nestor Osorio. Mr. Osorio stated that one should achieve progress in the case of human organ trafficking. One would have to find an alternative way to do it otherwise, he added.

On January 25, 2011, the Parliamentary Assembly of the Council of Europe (PACE) approved the resolution about the illegal trade of human organs in Kosovo. PACE urged to conduct unbiased investigation into all circumstances of the case. It is worthy of note that for the first time the PACE report mentioned the involvement of the sitting Kosovo administration in the organization of the criminal group which was dealing with human trafficking, including the trafficking of human organs.

However, the West did not let the UN work normally in this direction. Kosovo's Foreign Minister Enver Hoxhaj said at the meeting of the UN Security Council on August 30 that the events of July 25 were an act of violence committed by Serbia on the territory of Kosovo. According to him, there can be no parallel structures of power in Kosovo. Those Serbs who live in Kosovo must conform to Pristina. Serbia, Hoxhaj added, did not have the right to fund semi-military groups on the territory of the region.

When Kosovo's foreign minister was speaking about the investigation of illegal transplantology case, he said something that came as a very unpleasant surprise for the European Union. According to him, Kosovo has nothing to hide about this question. The authorities are ready to cooperate with investigation, he added. However, it appears that it is the West, particularly the EU, that has something to hide.

The situation in Kosovo's northern territories populated by approximately 200,000 Serbs and Gypsies, aggravated considerably on July 25, 2011. The authorities of Pristina attempted to establish control over the administrative border with Serbia in violation of international agreements. Kosovo Prime Minister Hashim Thaci gave a personal order to police units to take two boundary points - Yarine and Brnyak - to prevent imports of cargoes from Serbia. The decision was like a tragedy for the non-Albanian population of the region. Neither Serbs, nor Gypsies indulge in illusions of what they may expect in case they lose what has been left of their independent rights.

It goes about the expulsion of the Serbian and the Gypsy population from the northern territories of Kosovo. Many Serbs stood up to defend the two boundary units that connected them with Serbia. Tens of people were injured as a result of the conflict, one Albanian policeman was killed.

Serbian Foreign Minister Vuk Jeremic put a very unpleasant question to the European Union on August 30. The official wondered why the EU Rule of Law Mission in Kosovo left the Serbs without protection.

Russia's Vitaly Churkin took up the issue: "The provocative actions of Kosovan-Albanian authorities destabilize the fragile situation even further," he said. Churkin blamed the West for it and said that NATO provided helicopters to deliver Kosovan special troops to the Serbian boundary units.

KFOR forces took those two units under control. Vitaly Churkin stated the following: "We are concerned about the fact that they pronounced Yarine and Brnyak the closed military zone, in which military men had the right to use firearms for effect."

The EU Rule of Law Mission in Kosovo (EULEX) became responsible for the events in the region at the end of 2008. Vitaly Churkin cracked down on the mission having claimed that the organization violated the neutral status and ran the policy of appeasement with Pristina authorities.

Churkin also claimed that the UN delays the appointment of the head of the UN Mission in Kosovo. This is not a surprise at all because the European Union does not need anyone as it continues to put more and more pressure on Serbia.

Kosovan Serbs urge Belgrade to defend Serbian interests. They insist that in accordance with resolution 1244 of the UN Security Council, Serbia must demand the return of its security forces to Kosovo. This is only an illusion. After the defeat in 1999, Serbia has no right to keep either its army or police there.

Speaking about the ultimatum from the West, Kosovan Serbs mean the statements from German Chancellor Angela Merkel from August 23, 2011, which she made during her visit to Belgrade. Merkel demanded Serbian authorities in Kosovo be dismissed in light of Serbia's possible integration in the EU.

Serbian politicians harshly criticized the ultimatum, because Merkel virtually asked for abolishment of Serbian autonomy in the region. According to the German Chancellor, the Kosovan Serbs must be supervised by those who used to gain profit from selling their organs to Western countries.

Belgrade is unable to show resistance to the destruction of Serbia. Some of them count on Russia's help. However, since Russia did not protect the Serbs in 1999, it is doubtful that the country will be willing to do it now.