Serbia and the New World Order 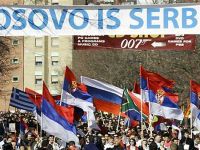 There is no doubt that in the massive wave of popular outrage against NATO's support for terrorists in Libya, a spontaneous international movement of decent people from all walks of life from the four corners of the Earth, the people of Serbia have opened their hearts speaking out in the name of justice. It is time for us to do the same for Serbia.

Twelve years ago I had the honour to speak out in the name of justice against the murderous terrorists of the Kosovo Liberation Army (KLA)/Ushtria Çlirimtare e Kosoves (UÇK in Albanian). It is time for us to do the same for Serbia, because while NATO commits its outrage in Libya, slaughtering children, precision-bombing homes, targeting civilian structures with military hardware, the Serbian people are being sold out by their own politicians.

The recent decision by the "Kosovo authorities" brought matters to the fore. (Kosovo is an illegal state because under international law, it is part of Serbia - how would the countries that recognised it like it if the heart of their country was torn out and given to a neighbour?) The "Kosovo authorities" in Pristina, the capital of this Serbian province, decided not to import any more Serbian products.

The Serbs took to the streets in protest, and while the NATO forces under KFOR either looked on or went away, the Albanian "Prime Minister" of Kosovo (he may as well call himself King of Saturn, the legitimacy is the same), Hashim Thaçi, sent the ROSU special police units, which began opening fire on unarmed Serbian civilians (1).

What is more ominous is the declaration of the by now hated Serbian President, Boris Tadic, who since 2004 has done absolutely nothing for his people except sell their interests down the river and bow to the demands of large Western corporations, selling their jobs and souls and futures to those whose only desire in life is to destroy Serbia and break the spirit of its brave people. In an interview with the German daily newspaper Frankfurter Allgemeine, he allegedly stated that the Serbian idea of ​​creating a Greater Albania is considered dangerous but the Serbian people could live with that if there was an agreed solution

Added to this was his demonstration of pig-faced arrogance: The more they ( people ) hate me, I'm more sure that I'm doing the better job. Now his latest contribution is that he is trying to destroy the arms factory in Kragujevac.

How can a President of Serbia acquiesce to one of the greatest outrages in modern history, namely the violation of every fibre of international law creating a mafia state (which controls 80 to 90 per cent of the European drugs trade) in the heart of the Balkans, namely the illegal state of Kosovo, the soul of the Serbian nation?

The answer to that question is "easily", because since Milosevic was illegally kidnapped and illegally detained at The Hague, it appears that the general guidelines for Serbian politicians is the more corrupt and the worse for the people and the future of the country, the better it is.

There are obvious reasons for this, since western corporations are already starting to eye up the fertile plains of Vojvodina, which Monsanto would no doubt love to use as a base to launch a multi-million dollar GM crop business right in the heart of Europe. This would involve, of course, the eventual separation of Vojvodina as well, and there are rumours that Hungary, Germany and who else? the UK and USA are already active in this process.

Therefore the attempts by Tadic to control and muzzle Serbia's media make sense for a person who is beginning to realise how hated he is. What do his paymasters say about this, those who spend half a century bleating about Freedom of Expression? Nothing, of course. What do you expect from leaders of countries that drop precision bombs on family homes in Libya?

The recent sacking of the chief editor of Alo magazine was part of this process - he was the only one to have the guts to criticise Tadic. And President Tadic himself, after his declarations about climbing into bed with a Greater Albania, might have something to say about the allegations that his bedfriend Hashim Thaçi is involved in the trafficking of human organs, ripped out of Serbs in Kosovo, that "nation" supported by NATO.

This, it is alleged, along with the drugs trade masterminded all along the supply route from Afghanistan (NATO) through Turkey (NATO) to Kosovo (NATO) is part of the pay-back to the members of the US Congress who sponsored the "independence" of Kosovo - being the only way the Kosovar Albanians can garner enough money to pay back their puppet-masters what they owe (after all, the "independence" comes at a price - the USA does nothing without self.-interest).

Tadic might also ask his bedfellow Thaçi what part he and his friend and advisor Xhavit Haliti had in the murder of the journalist Ali Uka in Tirana.

As the heroic Serbian people stand beside the heroic people of Libya in defending the Jamahiriya of the man who has done more for Africa and his people than anyone else, it is time for this wave of sympathy to be extended and to embrace them also. I stood with the people of Serbia 12 years ago denouncing the barbaric and murderous NATO attack, I stand with the Serbian people now as evil foreign forces strive to dismember their wonderful country.