Slavic and Muslim bomb for Serbia 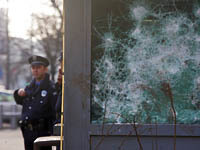 Serbia was faced with a new secessionist movement. At this time we are talking about Sandzak region located on the border with Montenegro, where most people are Slavic Muslims, similar to the Muslims of Bosnia and Herzegovina.

This region appeared in the reports of news agencies last fall. On October 28 a native of Sandzak fired at the U.S. Embassy in Sarajevo, the Bosnian capital. Once it became known that the perpetrator was a native of south-western Serbia, the Serbian police conducted a raid in Sandzak and detained 17 Islamic extremists. According to numerous Serbian experts, Sandzak is a much larger Wahhabi stronghold than Kosovo, where the level of religiosity of local Albanians is significantly lower than that of the Slavic Muslims.

Ironically, the new headache of Serbia was once the cradle of Serbian statehood. Until the end of the 14th century the center of the Serbian medieval state, Raska, was in today's Sandzak. Actually, today in the official documents this Serbian region is called not "Sandzak" but "Raska". However, the image of this area is very different from the patriarchal Orthodox Serbian heartland.

Even in the 15th century, at the onset of the centuries-long Ottoman rule, the people of Raska started mass conversion to Islam. When in 1878 following the Russian-Turkish War, Serbia became independent, its "cradle" was called in the Turkish way - Sandzak. This area was occupied by Austria-Hungary for 25-years. In 1913, it was divided between Serbia and Montenegro. Strictly speaking, it is currently in their composition.

Today, 65 percent of Sandzak population is Slavic Muslims (approximately 200,000), although only in three of the six communities in the region they constitute the majority. The formation of the national consciousness was ongoing throughout the entire twentieth century, during which they felt more kinship with the Muslims of Bosnia and Herzegovina. Many sandzhaklii (as they were called in Yugoslavia), settled in Sarajevo and other cities in Bosnia, took part in the war of 1992-1995, displaying particular cruelty towards the Serbs and (to a lesser extent) the Croats.

When in 1990-1991 the disintegration of Yugoslavia began, a branch of the Bosnian Muslim Party of Democratic Action (SDA) emerged in Sandzak. Its leadership included all the current leaders of the Sandzak Muslims - Rasim Ljajic, Suleiman Ugljanin and Mufti Muamer Zukorlich. Their mentors were the leader of the Bosnian Muslims, the first President of Bosnia and Herzegovina, Alija Izetbegovic and Bosnian Grand Mufti Mustafa Tserich.

Sandzak had no autonomy within Serbia, which the local Muslims were not happy about. In 1991 they held a referendum, where 98 percent of participants expressed the desire for autonomy "with the right to join another country." That is, to secede from Serbia and join Bosnia. The national Chamber of Sandzak Muslims was created. However, the Serb leadership did not yield to blackmail.

In January of 1992, the Chamber adopted the Memorandum to establish the special status of Sandzak, which would imply the creation of a parliament and government. The U.S. and EU supported them, but only in words as they were busy with wars blazing in Croatia, Bosnia, and then Kosovo. As a result, the Serbian military and police entered the area and put things in order. Over 45 members of the Democratic Action Party were tried in court.

Today Sandzak still does not have autonomy, but the parties of local Muslims are officially active there. The most radical of them is Bosnian Cultural Association headed by Mufti Muamer Zukorlich. "Serbian ideologues have created so terrible of an ideology that it falls under the definition of genocide," he once said. Needless to say, Serbian authorities do not have any ideology of genocide of Muslims.

The actions of Zukorlich are largely directed by his spiritual and political mentor - the Mufti of Bosnia and Herzegovina Mustafa Tserich. "If anyone can be a force for stability in the region, especially in Sandzak, it is Sarajevo. We Bošnjak of BiH, would like to say to Bosniaks in Serbia, that we are with them and for them, they are not abandoned, that we are a nation that lives in two states - we are in Bosnia, and they are in Serbia," he said a couple of years ago.

Among other local organizations are Sandzak Democratic Party Rasim Ljajic and Bosnian list for European Sandzak headed by Suleiman Ugljanin. Despite the fact that in their programs there are signs of separatism (they demand autonomy), Serbian President Boris Tadic handed ministerial portfolios over to them. In addition, the Assembly of Serbia has deputies from Sandzak. As for the linguistic rights, Muslims speak a dialect of the same language as the Serbs.

Today Sandzak Muslims seem to have western protection. For instance, German Chancellor Angela Merkel during her visit to Belgrade demanded that the Serbian authorities ensure the rights of national minorities. Turkish Foreign Minister Ahmet Davutoglu has publicly offered "mediation in resolving the problems of Sandzak." Finally, the Swedish Gothenburg with the participation of the local Bosnian diaspora opened the first Sandzak representation abroad.

There are plenty indications that a card of the Slavic Muslims of Sandzak will be played against Serbia.