Ukraine and USA to lay burden of Donbass on Russia's shoulders

The recent meeting of US Secretary of State Kerry with Russian President Putin in Sochi has generated many reports saying that the United States was ready to acknowledge the failure of the operation to "isolate" Russia. However, one should be more careful about unexpected initiatives of the Americans, as their goal is to find Russia guilty of disrupting the Minsk Accords. In addition, the USA wants to lay the burden of the Donbass on Russia's shoulders. 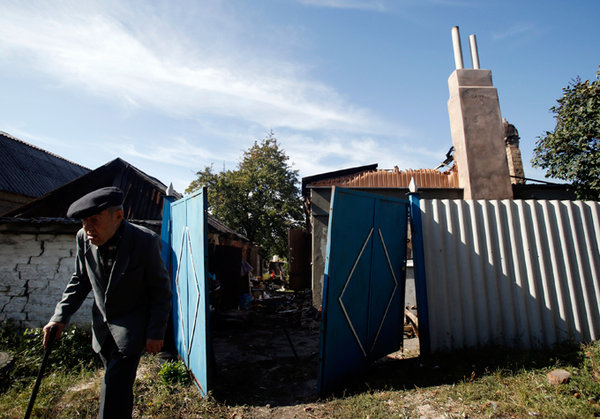 It does seem strange that the US administration suddenly decided to support the Minsk Accords. This is not the American way to lobby the agreements that Washington does not sign.

It is even more strange that Russia has de facto expanded the format of talks, although earlier, Russian officials were saying that the Minks-2 format of talks did not need to be expanded. In any case, Russia's Minister for Foreign Affairs Sergey Lavrov said triumphantly after the talks with Kerry that the meeting was "wonderful." Lavrov also announced that Russia and the US agreed to influence Donetsk, Luhansk and Kiev to execute the Minsk Accords.

However, after the meeting in Sochi, John Kerry flew to the summit of foreign ministers of NATO countries in Turkey. What was the summit about?

NATO foreign ministers warned President Vladimir Putin that he had almost no time left to transform the fragile peace agreement into long-lasting peace, reports AFP. Kerry said at a meeting of NATO foreign ministers in Turkey that it is a "critical moment for action by Russia and separatists to live up to the Minsk agreement" signed in the Belarus capital earlier this year.

Kerry also said that the United States and its NATO allies would keep sanctions against Russia in order to ensure peace in Ukraine. "And we hope very, very much that President Putin, Russia, the separatists, will come together to work with Ukraine in order to fully implement it (Minsk) and make progress," said Kerry. Interestingly enough, US Secretary of State John Kerry did not say a word about Europe's (France and Germany act as Minks-2 signatories) and USA's responsibility.

Yatsenyuk noted that "free and fair" elections "in the separatist regions," were impossible, as they would be carried out "under the barrel of the Russian gun." Where is the prospect for a political development, which is the basis of the entire peace process?

The reaction of Ukrainian mass media is indicative as well. Ukrainian publications wrote that John Kerry, after the meeting in Sochi, "informed" Ukrainian President Petro Poroshenko about his conversation with the Russian president. Poroshenko supposedly wanted to know what Kerry was doing in the "enemy camp." Thus, there is no signal on the required pressure from Washington to Kiev in the implementation of the Minsk Accords. It was not a part of the USA's plan at all.

The plan is different. As long as the Russian economy has not been destroyed under the pressure of sanctions, the USA wants to put Russia to its knees by laying the financial burden of the Donbass on Russian shoulders. The US wants to hold Russia responsible for the failure of Minsk-2 and make Russia pay for the restoration of the Donbass.

Ukraine does not mind that at all. An article by Igor Tyshkevich for the pro-American newspaper Hvilya is indicative at this point. The article titled "Great Deal for the Donbas and Reforms in Ukraine" says that Ukraine would not receive money for war, but it would receive money for economic recovery. Before that, the article says, Ukraine needs to get rid of the burden of the Donbass.

To achieve this, one must continue "talking" to the Donbass, the author advises. "That is, one must continue endless consultations, leaving all parties to the illusion of possible success. We must drag time not to hang the maintenance of the separatist regions on the thin neck of the budget."

"It was not the Kiev authorities, but the people implementing Putin's plan who were destroying the industry of the Donbass," Tyshkevich wrote. Therefore, Ukraine, according to Tyshkevich, is free from financial liabilities and social costs to rebuild the destroyed infrastructure. In a nutshell, the Ukrainian and US administrations have developed a plan to talk the talk as far as the Minsk Accords are concerned. Both Ukraine and the USA believe that Putin will pay for the restoration of the Donbass, which still remains a legal territory of Ukraine.

There is another plan: to hold Russia responsible for violating the Minsk-2 and make Russia pay compensation for the results of the US-instigated coup.

And it's already being done. In early March last year, the Ministry of Justice of Ukraine filed a 78-billion-dollar lawsuit at the European Court of Human Rights, subsequently sending two more lawsuits there. There are other instances, such as the International Tribunal for the Law of the Sea, the International Court of Justice, the Arbitration Institute of the Stockholm Chamber of Commerce.

However, Washington and Kiev have not been able to provide real evidence to prove the presence of the Russian army in the region. That is, in fact, it turns out that all the destruction and other problems are a consequence of the policy of the Kiev authorities. This is what the Minsk-2 says, making Kiev responsible for the restoration of the region.

The above-mentioned statements from John Kerry were part of the propaganda war of the United States. The US has always pursued purely personal goals. The USA wants Russia to take care of the Donbass, but Russia is already doing it. If it was not for Russia, the region would have been devastated.

Yet, the Russian economy can not afford funding the Donbass. Like the Crimea, the Donbass will have to count largely on its own efforts.

Read article on Russian on the Russian page of Pravda.Ru

15:26
American publicist names the ultimate goal of the game against Russia
14:33
The US will close access to its technologies to the companies supporting Russia
14:29
Russian Finance Ministry refuses to acknowledge foreign debt default
14:02
Teen boy suffers severe injuries as electronic cigarette explodes in his mouth
13:26
Kremlin: Default in Russia? Not our problem
11:23
Russian Armed Forces block Lisichansk from the south, take hundreds captive
19:07
The EU to provide Ukraine with €9 billions
18:56
UK to provide Ukraine with higher performance rockets for HIMARS systems
18:13
Crisis with Ukrainian grain exports is blown out of proportion - Putin
18:02
Express predicts London's possible reaction to execution of British militants
World
Expert names the four Russian regions that the Pentagon is planning to strike