Ukrainian Prime Arseny Yatsenyuk raised many eyebrows in the West with his "expressive" speech in Berlin. According to him, Putin's goal is to lead a war against the West, so Ukraine asks the West to help him protect Europe and the European Union. Merkel praised Ukraine's current economic reforms and promised to fund them. Now German Chancellor Merkel knows who is to blame for the failure of the Minsk-2 talks. 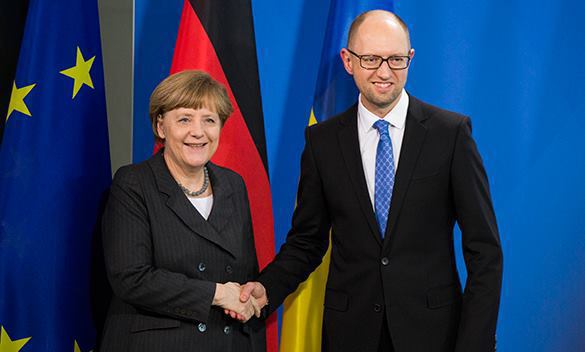 Ukrainian Prime Minister Arseny Yatsenyuk, speaking at the Konrad Adenauer Foundation on Wednesday, made it clear that Ukraine was struggling with Russia in the interests of the West. "We are fighting for border security and stability in the West. Putin's real goal is to eliminate Ukraine as an independent state and prevent our rapprochement with Europe. Putin's ultimate goal is to wage a war against the West," Yatsenyuk said.

According to the Ukrainian Prime Minister, there are "about 30,000 Russia-led terrorists and Russian regular troops in the east of Ukraine, as well as hundreds of new Russian tanks." Speaking of the truce in the Donbass, Yatsenyuk said: "We would like to see it, but we must be realistic and pragmatic. If this is a ceasefire agreement, then I want to know what the fire looks like," said Yatsenyuk. When asked why the OSCE records more violations from the side of Ukrainian armed forces, Yatsenyuk said: "Our conscience is clear."

"The purpose of Yatsenyuk's visit to Germany is clear. He wants to win support and, if possible, more money, - political analyst Vladimir Bruter of the International Institute of Humanitarian and Political Studies told Pravda.Ru. - What is more, Yatsenyuk has proved to be somewhat excessive today, so he is trying to find, as they say, a new "roof" for himself, because it is unlikely, given his low rating, that Washington will put stakes on him in the future. Yatsenyuk is trying to find a new support group for himself, given that Germany and the United States differ in their approach and stance on the Ukrainian crisis. Yatsenyuk is trying to take advantage of these contradictions," the expert said.

From the very beginning, Yatsenyuk was a champion of a military solution to the conflict. He continues to insist that this remains the only solution to the problem. However, Germany disagrees, Vladimir Bruter said.

Ukrainian political scientist and publicist Yuri Gorodnenko believes that Germany does not have its special position as far as the Ukrainian conflict is concerned.

"One of the goals of Yatsenyuk's mission is to prepare Germany for the resumption of the conflict in eastern Ukraine, - Yuri Gorodnenko told Pravda.Ru. - Yatsenyuk is preparing Germans morally. He is explaining to them how events will develop according to the plan prepared by the Americans, and when the war is going to resume. He is telling the Germans - prepare your political position, your explanations as to why the Minsk agreements were disrupted, and whom we are going to blame for it," the expert told Pravda.Ru.

Officially, Angela Merkel made it clear that there was no Marshall Plan in store for Ukraine. Merkel sweetened the pill by praising the Ukrainian reforms. She also promised Ukraine 500 million euros, of which 300 million will be used for the modernization of infrastructure, economy and health care. The German Chancellor again called for the implementation of the Minsk-2 agreements.

According to German publications, Merkel had unpleasant questions to Yatsenyuk in their tete-a-tete meeting. The questions were about the investigation of Maidan riots that claimed hundreds of lives. Noteworthy, the working group of the Council of Europe found the Ukrainian investigation incomplete and indicated that the Ministry of Internal Affairs of Ukraine prevented the effective investigation.

Also read: Can Germany turn its back on USA? No, it can't

There are two groups in the political elite of Germany, Yuri Gordnenko said. "The first group, indeed, defends the national interests of Germany, or at least tries to position Germany as an independent political player. It goes about such ex-chancellors as Gerhard Schroeder, Helmut Schmidt and representatives of Russian-German business circles. However, those people can not show influence on Germany's position, because Germany remains under very strict control of the United States," the expert told Pravda.Ru.

The second part of the German elite remains completely under the control of the United States and works for the political will of the United States. Frau Merkel is a member of this group, Yuri Gorodnenko believes. "One should not overestimate the purpose of the visit. Germany is a dependent country and we are talking about technical problems here," said the expert.

"Merkel is perhaps not very happy about the fact that she supported Euromaidan and became completely subordinated to the policy of the United States. There is no way to go anywhere else for her now. Following a call from Washington, she has to welcome Yatsenyuk or Poroshenko or someone else," said Yuri Gorodnenko.